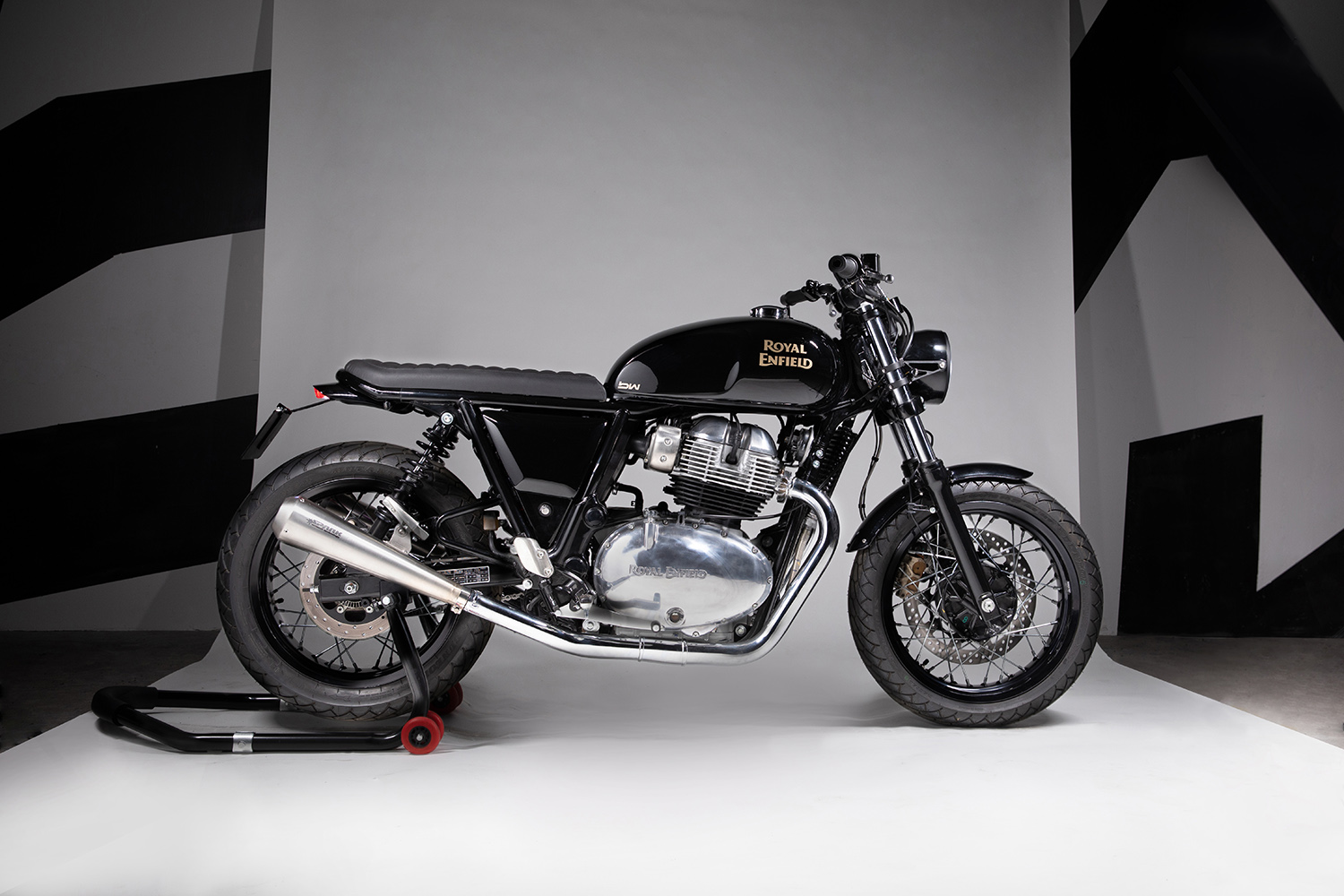 You may not see them in the paddock on race weekend, but at least four of the current crop of Formula One drivers have a custom motorcycle. Turns out those multi-million dollar open-wheelers can’t provide you with all the kicks you need. It’s a fair bet these driving aces know a thing or two about a quality machine and when Scuderia Ferrari’s young gun Charles Leclerc was in the market, he turned to French outfit Bad Winners to build him a custom creation. With ten years in the scene the Paris based company shows no sign of slowing down and looking to take care of those not on an F1 salary, they’ve compiled a four-part ‘Motokit’, to help owners transform their Royal Enfield Twins.

“Back in 2019, we took up the challenge given to us by Royal Enfield to design and craft a unique custom bike based on the 650 Interceptor. While the order was for one unique custom build, it seemed the logical next step for Bad Winners to independently develop a replica Motokit version which could then be bought and self-assembled at home by any Royal Enfield Twins owner,” Bad Winners boss Walid explains. This is not their first rodeo however, with kits already available from the company for the Ducati Scrambler, Triumph Thruxton and Husqvarna Vitpilen.

“Bad Winners motivation behind the development of the MotoKit was to add elements of their own signature custom build style to optimize the style of the 650 Twins and refine the riding experience, while bringing a contemporary touch and a premium finish to both the Twins models that have already become timeless classics,” Walid tells us. The kit can be purchased as a whole or in four different parts, Front kit / Seat kit / Suspension kit / Performance kit. With owners then able to decide which of the ‘Micro’ kits they might want to use along with their own custom touches.

The ‘Front Kit’ starts with a set of Renthal Streetbars that have been customised so as to accommodate six pushbuttons and an adaptive electronics box to connect to the vehicle’s original wiring loom. The big and clunky original twin gauge instrument cluster is then replaced with a tiny speedo from Motogadget. The headlight helps to sharpen up the feel of the bike and the bespoke shell contains a Koso Thunderbolt light. With a custom set of turn signals slotted into the Bad Winners headlight mount and a set of Oberon Performance mirrors to finish things out.

While the front end is a bolt-on affair, the ‘Seat Kit’ brings the first frame modification to the motorcycle. “Without changing the overall geometry of the motorcycle, kit owners are directed to cut the original rear buckle in order to install a new one that will shorten the seat by 5cm.” This instantly improves the look of the bike, with the big, awkward seat gone, and replaced by a handmade piece in either real or imitation leather. A new mudguard and number plate holder are also included, as is an LED taillight that is a plug-and-play unit.

Recently when we featured the Enfield Twin build of DGR’s Mark Hawwa, the biggest change he noticed was the upgrade to the suspension. And Bad Winners knew that this was a popular demand amongst the bike’s legion of owners. So, their ‘Suspension Kit’ was trialed and tested to deliver the best results, the stock forks are pulled apart and a YSS upgrade kit slots in to replace the internals. At the rear, buyers get a choice of three types of rear shock, depending on how serious they want to get, with two offerings from YSS and a Bitubo set for those who want the ultimate in adjustability.

The final piece of the puzzle is the ‘Performance Kit’ that makes the most of that wonderfully developed 650cc engine. The air filter is replaced with a better flowing item from S&S, that also sounds the business. While the exhaust options include a pair of S&S or Spark slip-ons, and for those who want to go all the way there is the full S&S two into one system. Finally, a pre-mapped Dynojet Power Commander is included, tuned for the configuration you chose.

The full kit is priced at around €3,000 and gives the budget friendly RE a total make-over, with a custom look to match the improved performance. Others may choose to pick particular ‘Micro Kits’ to enhance their already one-off creations. Or for those who are counting their pennies, the option to buy one kit at a time until you have a completed bike that is never off the road for more than a day makes for yet another approach. From big dollar builds for Formula One stars to brilliantly R&D kits for the rest of us mere mortals, Bad Winners continues to prove they have everybody’s custom needs covered.