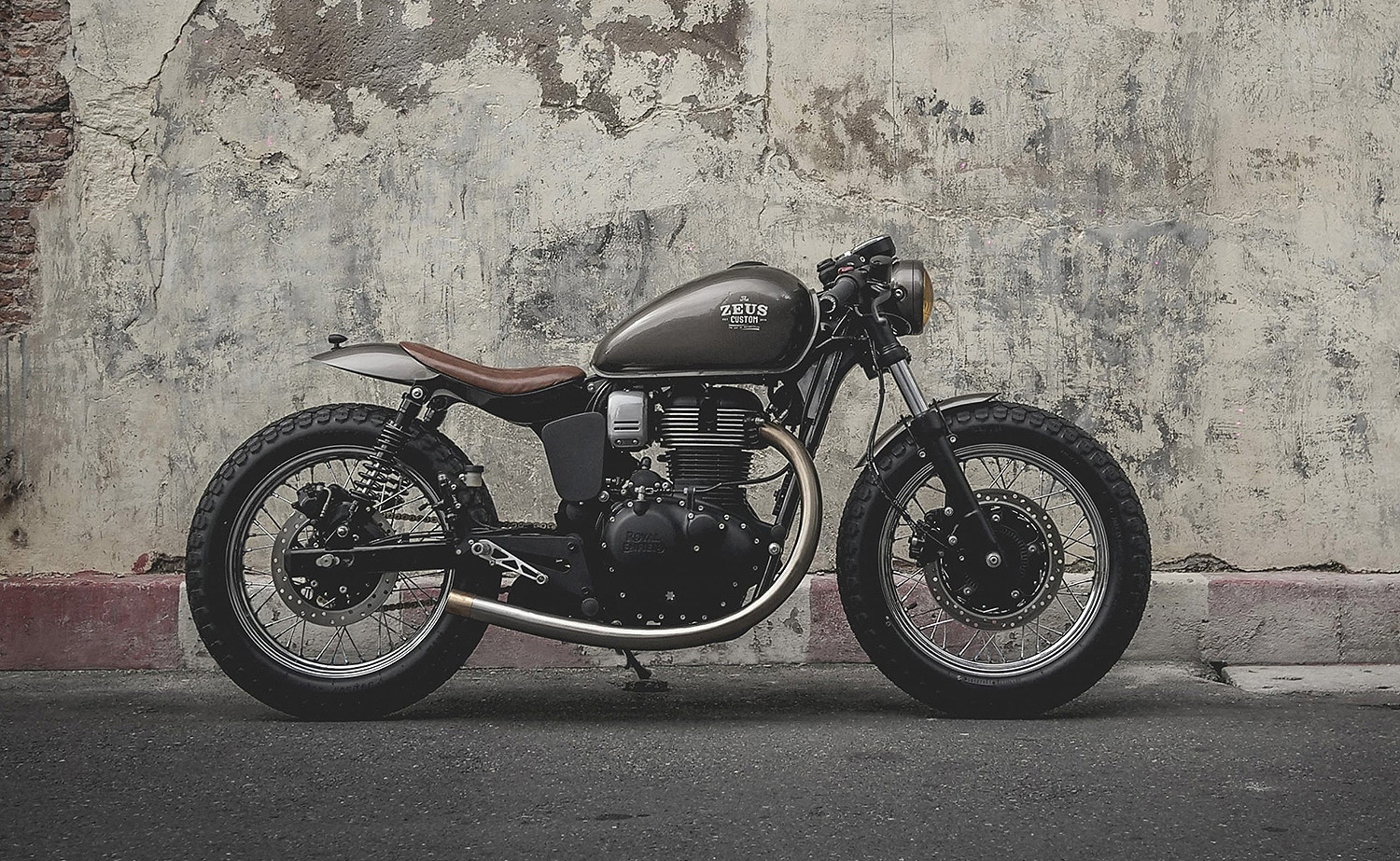 It’s one of the oldest styles of custom motorcycle and in my opinion still one of the best, the humble bobber. Stripped down to the bare essentials with a laid-back style, they’ve been popular since the end of World War II. But outside of old British bikes or the best of American muscle, few brands have offered a suitable candidate. In recent years Honda and Yamaha have both tried and failed to provide a new platform, and others haven’t tried at all. Royal Enfield, however, is hitting it out of the park of late and their Meteor 350 is the Indian giants latest offering. So to show how to turn one into a budget-friendly bobber beast, Thailand’s Zeus Customs was given the keys and told to put some respect on its name.

That name, ‘Khun’ (a sign of respect), shows how seriously head honcho Mooyong of the Bangkok outfit takes not only this project and the little Meteor, but his relationship with Royal Enfield too. His custom builds have been earning the company a hell of a lot of street cred in Thailand and that equates to sales off the showroom floor, something that was given a big boost when he built RE an awarding-winning Interceptor 650 a few years ago.

“Khun was inspired by the design of various styles of motorcycles, which eventually came together to create a unique look. This time, the Royal Enfield Meteor 350 was used as a model to show the versatility of its use,” he tells us. To get a feel for the latest RE offering he first had to strip it back to get an idea of how to approach this new challenge and one thing was obvious. Unlike any other RE of the past, there is liberal use of plastic on the Meteor and the frame, especially at the rear is not as conducive to customisation.

A little like the weird upsweep of an old Honda CX500 that merges with the shock mounts, Mooyong wasn’t going to try and make that part of the stock bike work. So, like many CX owners before him, he simply swung the grinder into action and cut it off. This might seem daunting for a new bike buyer, but that’s why custom shops like Zeus are here to show the way. “The rear is 100% rebuilt” and from the solid lines of the new subframe, to its seamless integration with the custom shock mounts, it’s a beautiful thing.

Over the top goes a brown vintage leather seat, that is deliberately minimal in effect, and behind it is a swooping tail section that also serves as an integrated rear fender. It’s hard to imagine that it will be long before such conversions can be bought in kit form. The front end gets its own unique fender, a distinctly bobbed item that sits on a custom set of mounts. And the smaller than stock 6in headlight mounted hard to the forks, with a yellow lens, gives another excellent touch.

The colour sprayed over the new tins is a hue that Zeus call ‘Blonde Brown’ and it gives the very budget-friendly bike a big dollar feel, the simple colour change alone adding a level of luxury and sophistication you don’t expect to see on a bike that’s around $5k brand new. To help the paint pop even more, many other parts were blacked out, given a textured crinkle coat, or in the case of the throttle body cover, hit with some extra lacquer for a more metallic feel.

The addition of sparkling stainless spoked wheels, with custom polished rims and vintage inspired rubber only helps with the look. But it’s not all about the aesthetic, with time in the saddle indicating to Mooyong some suspension tweaks were required. He started at the rear by raising it up thanks to a set of 350mm shocks. Before moving his way to the front and rebuilding the stock forks to internally lower them. “The handlebars have also been lowered to make the bike look more sporty.”The low bars required the pegs to be moved rearward to give the rider more room, and this is done with a custom set of turned rearsets and controls.

To minimise the clutter like on any good bobber build, the battery was moved under the swingarm, the loom cut down and a set of bar end indicators fitted. Finally, to finish out the build, the engine is helped to breathe a little easier thanks to pod filtration and the signature Zeus curved single exhaust that ends with a hand turned brass tip.

‘Khun’ not only looks amazing with a brat style edge, it just goes to show you can have a hell of a lot of bike for a small chunk of change, and for that, you have to respect both Royal Enfield and the team at Zeus Customs.