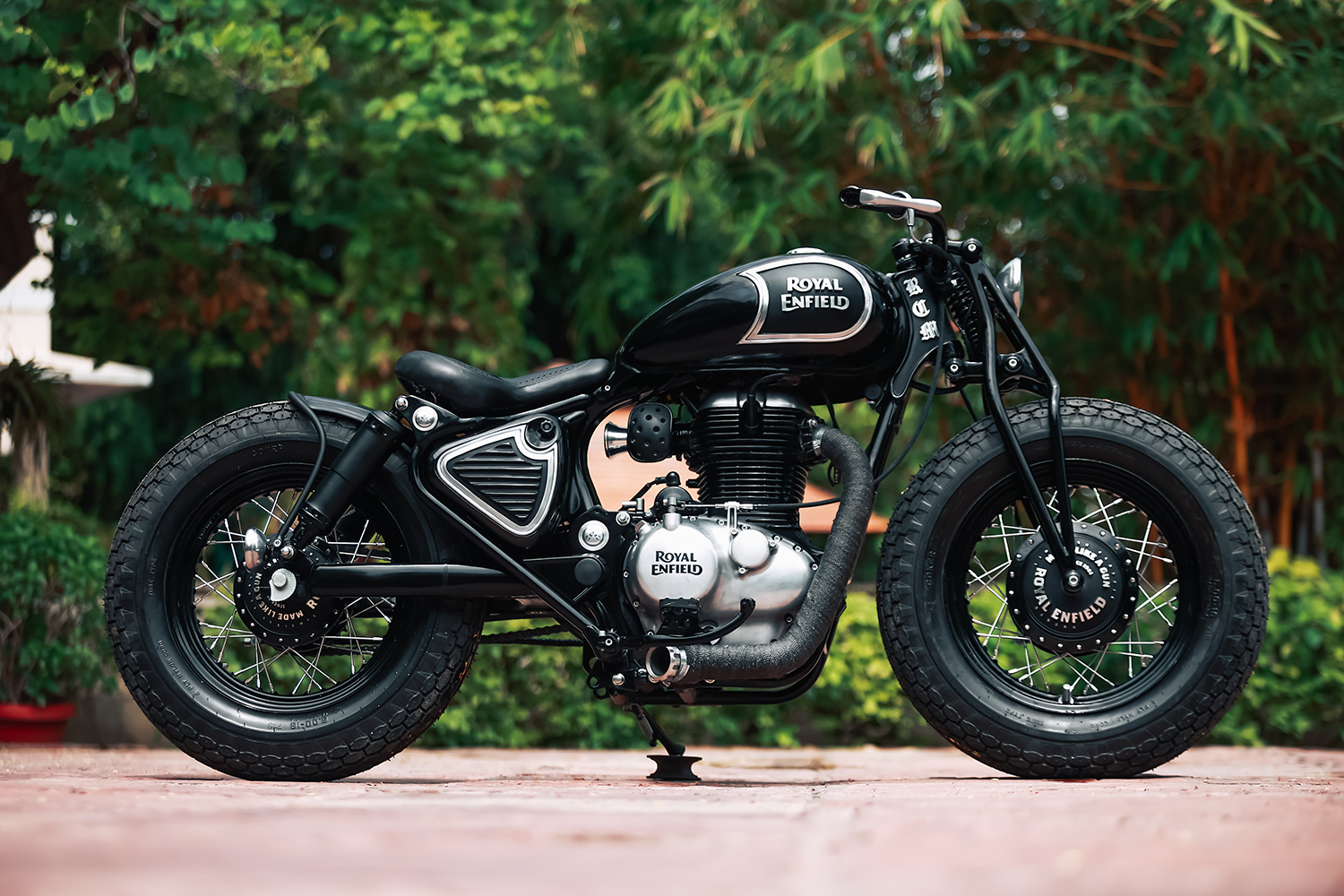 History truly is one of our greatest teachers and if you’re looking for a guiding light then studying the tale of Royal Enfield, the world’s oldest motorcycle company, will reveal many golden truths. With a history dating back to 1851, the business made everything from bicycles to firearms and even sewing needles. By 1901 motorcycles entered the inventory and perhaps most importantly, for the past 60 years, those bikes have been built entirely in India. For our friends at Rajasthan’s Rajputana Customs, this is a history that has fuelled their enormous success. So, to roll all of those decades into one beautiful bike, they set about crafting this beastly bobber and it even wears the name of the Indian Bison, Gaur.

Before any work commenced or a donor bike was founded, leader Vijay Singh Ajairajpura and his crew sat down to look at hundreds of pictures of Royal Enfield motorcycles dating back to 1901. They examined the changes, the components that stayed the same, and the styling variations that came throughout the years. By doing so, they found that certain components from certain eras not only stood out to them but could be perfectly incorporated into their latest build. The whiteboard telling the story, pegs from 1909, a 1924 styled seat, ’36 girder forks and so on.

All of which would be applied to the very latest Royal Enfield single, with that silky smooth J-Series engine. With that new bike rolled into the shop, rather than putting it up on one of the lifts, it stayed on the ground so the guys could get up close and personal. And it’s on the floor that much of the work is done, this might be one of the world’s most successful custom shops, but the boys work as they always have, keeping things simple and true to their roots. OH&S eat your heart out, as gloveless hands spin up angle grinders with mental gripped in the other hand or wedged between the feet.

Back to a bare frame and turning the chassis into a roller would be a true mix of old and new, largely built by hand. At the front is that unmistakable girder fork and you can instantly pick out the heavy influence that the 1936 4-valve played, utilising the same style of suspension. But the 2022 version is beefier, has a more aggressively tight rake for faster steering, and is built to a far superior standard. The legs curve out to accept the big wheel package to come, before running down to a custom axle. At the top, the completely blacked-out pieces, including the shock are only broken up visually by the stainless nuts and bolts.

At the rear end of the bike, the suspension is all modern kit, with the twin units delivering a beautiful ride and the spring covers giving a little hint of a vintage vibe. The braking system takes that same approach, with both the front and rear featuring uber cool drum brake setups. Both feature incredible machined graphics that are milled for contrast, and this level of high-quality detail can be seen throughout the build without ever going over the top. To finish the roller, stainless spokes lace the new hubs to blacked-out rims, and then chunky tyres are squeezed on to complete.

The bodywork was all about keeping things minimalist and vintage, and the tank has been completely hand-shaped with just the simplest of tools. The shape is as smooth as silk and is accessorised with a hand filed metal decal and vintage lettering. The company’s own lettering is then added to the neck, with the tank mounted further back on the frame and it’s all topped off with a custom machined filler cap. The rear fender is about as minimalist as it gets and allows plenty of tyre to be exposed, and the round bar plays a bigger role than the metal unit itself.

An old-school styled build needs quality leather work, and that’s exactly what Gaur gets, with a seat inspired by the ’24 Sports Model 200. The custom seat base keeps it all nice and low, with generous padding topped by vintage black leather that’s been tastefully embossed. The same leather is then wrapped as grips on the new flat bars, which were of course, made by hand. These feature one of the coolest touches on the entire bike, with the inverted levers shaped by one clever craftsman, sitting on the floor and taking his time to perfect the part.

The single-cylinder engine gets hotted up thanks to a new custom pipe with a machined tip, and the velocity stack was machined and milled at the same time. Even the accessories on the bike are meticulously made at the Jaipur workshop, the vintage inspired headlight tricked out with a clear sanded lens, and the red of the taillight the only colour on the entire build.

One thing we love about Rajputana is that their bikes are functional, no matter how radical the design and the new toolboxes give you a place to store your wallet and phone. But the true genius of the build is the blending of RE history into one road-ripping bobber build, that truly earns its beastly name!