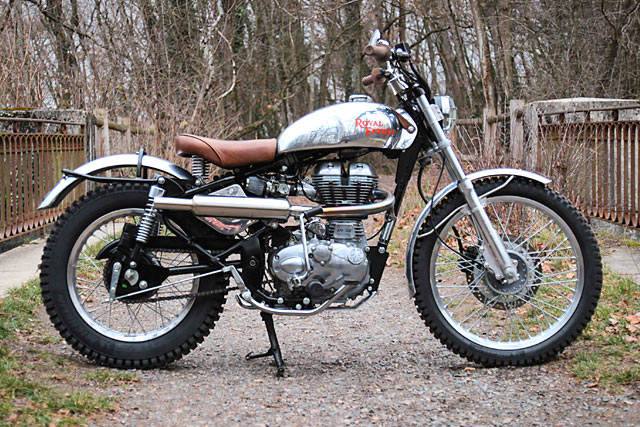 Old motorcycles, while they may look like heaven in the fancy studio shots you’ll often see, can be right little bastards in the flesh. Their exorbitant cost, oil leaks, starting issues and inexplicable breakdowns are enough to challenge even the most even-tempered of riders. Insert a picture of Mother Teresa kicking over a bike and setting it on fire here. A quick and easy way to avoid this hassle is to create a classic look from a new motorcycle. Just like France’s BAAK Motocyclette have done with this Royal Enfield Classic 500. BAAK’s history began in an improvised workshop in the Lyon basement of owner Rémi’s Grandma’s house in 2012. Starting their life with Triumph Bonneville customs, they expanded rapidly. So rapidly, in fact, that within two years, the workshop was deemed too small. It was then moved to nearby Tassin-la-Demi-Lune. And no, we didn’t make that name up. [superquote]“We enjoy the backdating trend, which is using modern vehicles and giving them a vintage look while also upgrading the levels of finish and ride quality.”[/superquote]

“We create full custom builds at our workshop,” says Julien, a colleague of Rémi’s ”We also design and make a small series of bolt-on parts for the motorcycles we like: mostly Triumphs, Royal Enfields and Moto Guzzis. We enjoy the backdating trend, which is using modern vehicles and giving them a vintage look while also upgrading the levels of finish and ride quality.” BAAK had already created a trials-looking Royal Enfield before, but in a more reserved way. This one they describe as being a bit more raw and exclusive. “We created it for Nicolas, a customer who is also a mutual friend. He is the CEO of a communication agency and someone who is also very involved in Lyon’s cafe racer culture.” “We had a few road trips together before he got his Royal Enfield, including a round trip from Lyon to Biarritz’s Wheels & Waves this year. Nicolas had ridden off-road motorcycles quite a bit when he was younger and I think he wanted to maybe relive his youth a little. We decided that Royal Enfield was the only modern motorcycle brand that could provide this; as any fans will know, they still manufacture the same basic rides that they did in the 60s. They even smell like the sixties.” “We enjoy the long-stroke, single cylinder engine which works in a way we are not really used to anymore. It’s not rational, either. Nowadays, a 500cc engine should provide more torque and more than the conservative 30 horsepower this Royal Enfield engine puts out. But once you spent a few minutes riding it, you just don’t want to switch back to modernity.” Nic wanted a motorcycle with a pure vintage look, a few chic details and which would be as much fun as possible to ride. It also needed to be pretty much unbreakable, as Nicolas planned spending some serious time in the saddle and off the beaten path. “So for his first test ride, we went to a forest a few kilometres from our workshop and let him go wild.” “For the build, we manufactured and transformed almost all the parts of the factory bike in order to make it look as close as possible to the old BSA, AJS and vintage trial racers. The mudguards, gas tank, handlebars and exhaust; all of them were fully redesigned. But we kept the BAAK touch by applying some leather details on the seat and on the battery cover, which creates a contrast with the surrounding raw aluminium.” Julien notes that they didn’t want the build to look exuberant, as it was all about finding the right balance between old and new while keeping the lines of the bike as pure as possible. “We uphold the local tradition of craftsmanship,” says an obviously proud Julien. “This isn’t just something we’ve created ourselves. These traditions, tinged with authenticity and perfectionism, have been practiced in Lyon, France for centuries. All we are doing is keeping them alive”.