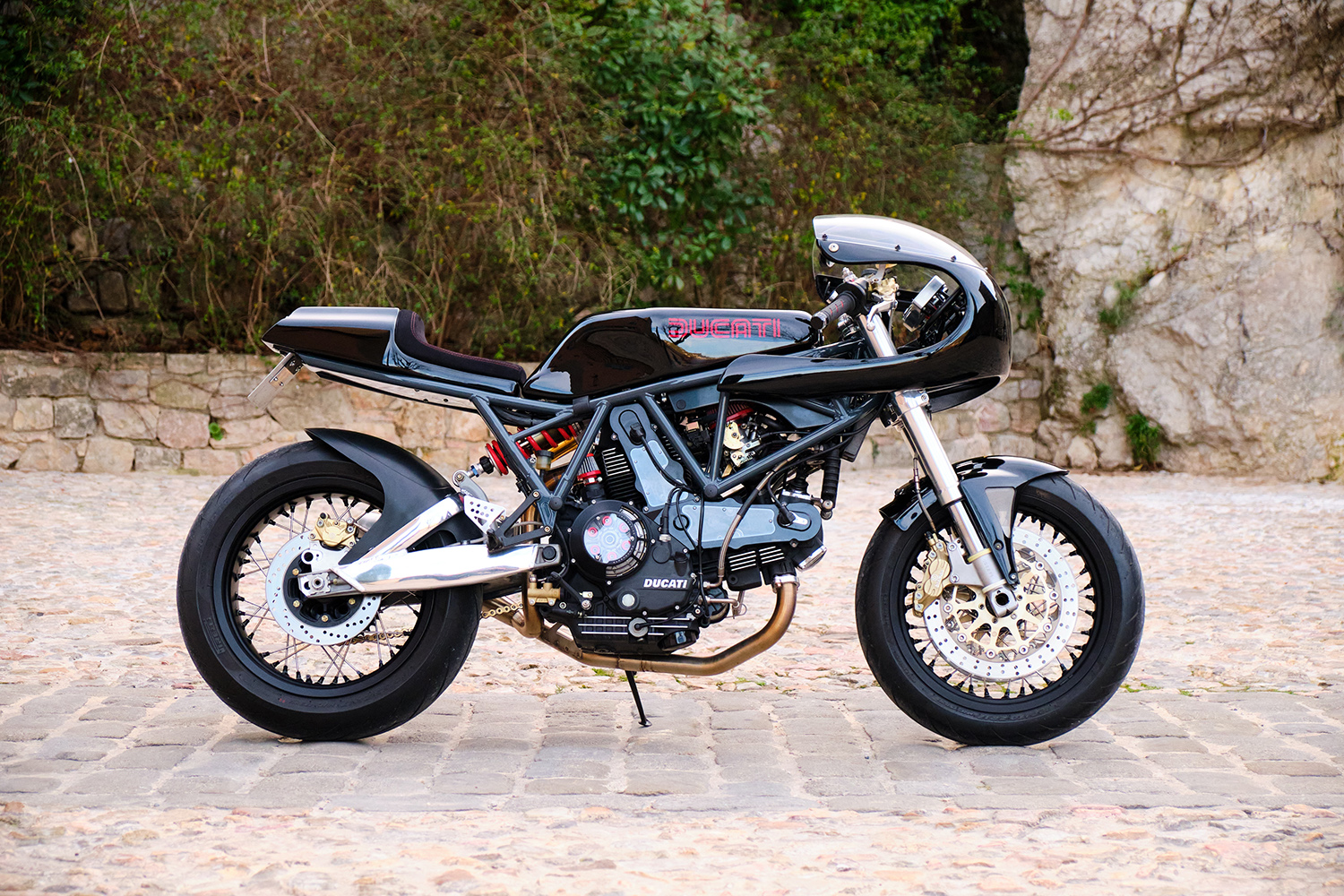 I’d like to introduce you to Rude Bikes and their TT2 Bol d’Or, only the second bike to emanate from their workshop in Seillans, in the South East of France. Using Ducati’s 1000 Supersport Dual Spark as a donor they have created an elegant and subtle chef-d’oeuvre, and from my time with the bike and its creators I learn that there’s a lot more to it than initially meets the eye.

Splinter Fangman and Guy Greville Morris sound like they could be a crime fighting duo but they are collaborators on a project that has been brewing for the best part of 15 years since having fortuitously met through mutual friends. Having commissioned the build of a CBX1000 cafe racer in Holland three years ago, Splinter so enjoyed the process he yearned to continue but not finding a suitable workshop closer to his new home in France able to undertake projects to his exacting standards, he and Guy finally consummate the partnership; “let’s start a garage, let’s make bikes!” So, that’s exactly what they did and this is their latest offspring. For Guy, his love for motorcycles and all aspects of mechanics is a hereditary disorder; his grandfather, an engineer who notably invented the Nyloc nut, built his first bike from scratch in 1917. As a 4 year old Guy would ride on the tank of his grandfather’s Triumph T100 and from that day on he was hooked. At the tender age of fourteen he bought a BSA 350 clubman which he hid in the hedge and snuck out as often as possible. Guy has forever tinkered with and rebuilt bikes, it’s fair to say that he is the absolute epitome of a dyed in the wool biker.

It almost goes almost without saying that the machine you’re looking at is inspired by the TT2, a favourite Ducati of Guy’s, who happily waxes lyrical about the sweet handling and lightweight nature of the original racebike, but this is more than a modern, road going iteration of a TT2. Having said that, the tank is modelled on it’s race counterpart, proving his mettle, Guy initially sculpts with foam and a four part mould is taken from that shape, likewise for the seat and tail unit, all are finished in fibreglass and the tank lined with resin.

Up front an old SS fairing is procured and subjected to a dose of liposuction; a 50 mill band is sliced from its middle to create a sleeker look, giving a more purposeful feel to it, akin to the Supermono. A tube is asymmetrically, hence the Bol d’Or name, countersunk into the fairing for the single headlight, and while we’re on the subject of lights; at the back end the brake lights beautifully blend in to a pair of pinstripes and are flush mounted to the tail thanks to a silver lined lightbox inside the tail unit, a twin filament LED and live edge plexi; it’s a beautiful detail.

In fact, the devil really is in the detail with this build, the front mudguard has two, mesh lined, triangular cut outs to aid brake cooling, an homage to the race 916. There’s a little heat shield for the ohlins shock reservoir, inboard of the front fairing are a pair very neat 2 inch curved mirrors, the dash is CNC’d billet aluminium with an analogue Smiths tacho, a head not to the “wobbly” tacho of the Vincent Black Shadow, the speedometer is Motogadet digital, a nice blend of old and new school.

The triple tree has been engraved with RB002, Rude Bikes number two, a reminder as you sit astride this black beauty that its something special, the bike itself sits on a pair of handmade Alpina spoked wheels. The left side is dominated by a sumptuous two into one reverse megaphone exhaust, obviously very reminiscent of the Conti you see on the Pantah. As the heat effects the stainless steel it tans, matching the brake callipers and chain, nothing is coincidental, no detail random. The whole bike is finished beautifully, a masterclass in seamless and understated elegance, there’s not a hair out of place or a detail that hasn’t been finessed.

Of course, before all the aesthetic fab work started, the engine is rebuilt and Cerakoted, the frame sandblasted and refinished, the back end of which is narrower and lighter, it’s also slightly flatter; the line from tank to seat is flawless and classical.

For the pair, form and function have to work in harmony, this isn’t an art bike, it has to work, handle and perform, this is  the driving force of the design, there’s no redundant visual flash. It’s cool because you can’t tell it’s cool, everything is discreet, it’s almost the antithesis of your regular all-guns-blazing custom bike. The tank is lower profile than the original but can carry the same volume of fuel, thanks to having relocated the battery and replacing the airbox with a pair of K&N cones. This bike is something that can be enjoyed as a practical, useable machine, maybe it’s what the factory would have done, had they been given the freedom to do so.

To ride, it’s predictably nimble, having shed thirty kilos and the throaty sound coming from that exhaust is how I imagine a sharp suit wearing, whisky gulping, cigar smoking cad from the 40’s might have spoken to his new belle, with a voice like molten glass.

Splinter and Guy have created something wonderful in this, it’s an every day custom that will provide the same reliability of a stock Ducati, make of that what you will but it won’t need special treatment and can of course be serviced by any Ducati workshop. Maybe this is the best of both words, a practical custom, a modern classic.

Of course, the team have started working on the MK2 version of this bike, which will have a couple of tweaks, primarily a side mounted airscoop to aid cooling of the vertical cylinder. Employing Ettore Bugatti’s adage “Great form usually delivers good function” I am sure they are destined for great things, good luck lads!