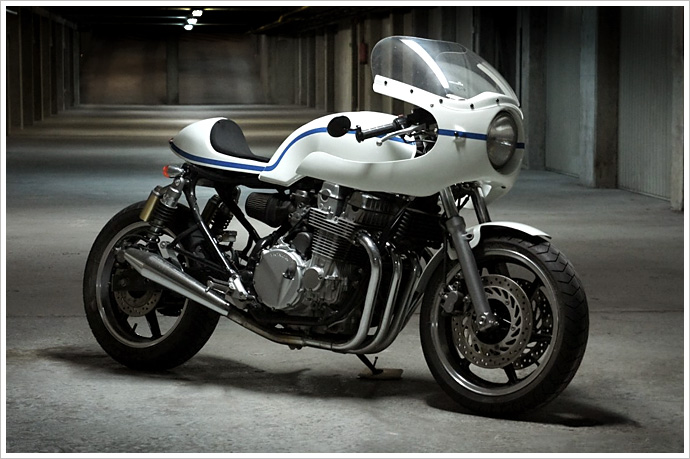 If you ever found yourself riding in France and the whim took you to see just how far you could go west-bound and down before you hit Spain, sooner or later you’d probably end up in Bayonne. Being the last real French city before travellers reach the border, it’s famous as a stop over on the route from Paris to Madrid. It’s also well-know for it’s chocolate, ham, and as being the oldest bull fighting city in France. But we think it’s probably time that something else was added to the list. Thanks to the city’s Ruleshaker Motorcycles, it seems to us that killing angry cows or eating cured swine just got a whole lot less interesting, due to a certain new Honda in town. The shop is run by Iban, who obviously loves his seventies retro motorsports. Being the purist that he is, the original Honda chassis remained roughly stock. The engine, on the other hand, benefited from a disappeared airbox, some rather large K&N filters, and a classic set of peashooters to handle the four-into-two pipes. The bike’s wiring has been fully culled to make sure any unnecessary weight was jettisoned. The original chunky instruments have been replaced with an elegant single-dial set-up, and aluminium has been used to replace the heavier, stock items where possible. Needless to say, the feature that really makes the bike stand out from her CB sisters is the elegant fairing. Part Dick Mann/Daytona ‘70, and part Mad Max, it somehow manages to be both classic and very contemporary at the same time. It’s beautifully executed sunken headlight and the thin blue line that wraps around it as a continuation of the tank and seat decal show the skilled touch of a deft hand. Also notice the blue-hue to the licence plate light. We love a bit of well thought out colour coordination, don’t you? Taken? We are. If you’d like to learn more on the Basque Bad Boys, then hit them up on their Facebook page, or pay a visit to their site. And before you say anything, there’s no ham on there. I already asked.