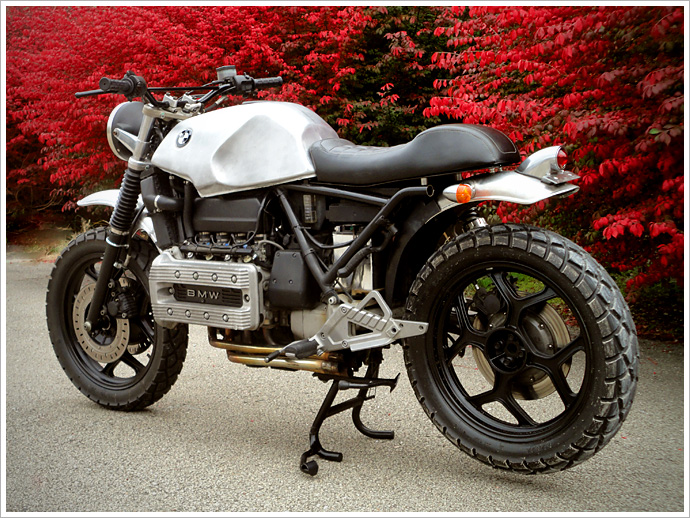 See that title up there? The one that starts with the name “Scott Halbleib”? There will two groups of people who read the line. The first, and probably by far the largest group, will be the readers who say, “who the hell is Scott Hal… Hal…” And then there will be those of you know who Scott is in the same way that you know that Dare Jennings is the guy behind Mambo and Deus Motorcycles, and that Ian Barry is the guy who owns Falcon Motorcycles. See, every bike that Scott has fashioned has been a jaw-to-the-floor, put me in a nice dress and call me Shirley world beater. In fact his first build, the Honda CB450 Bobber we featured in 2010 is one of my personal all-time favourites. Seriously. So when we heard from Doug Devine, owner and builder of the Yammie we posted last Wednesday that Scott had a new bike, we got our nice dresses on, picked our jaws up off the floor, and this is what we found… Here’s Scott. “This one came out of left field. An acquaintance left a message that he was getting rid of his bikes and wondered if I’d be interested in his BMW that had been sitting in a garage for 6 years. Sure. Then I got it home. What the hell was I going to do with this mint green mammoth? I had to get it running first, which meant stripping it down a bit to swap out the battery, new cables, clean injectors, filter and swap fluids. A little trial and error and it was running perfectly.” “I thought about putting it back together and selling as a restore of sorts. But the challenge of trying to do something with it was keeping me awake at night. Plus the f@#cking thing was eating up all the space in my garage, so everything came off. Then I wondered if I had made a mistake. It didn’t necessarily get any better looking. I spent a lot of weeks mocking things up with foam, hangers, cardboard, spare parts, etc. and this is the result – a tourer-enduro.” “The biggest challenge was creating a seat that fit the bulk of the bike. I spent some time carving foam until I had something I liked, then had my upholsterer, Mike Brewer stitch me up some 2 tone vinyl.” “It’s a beast. And looks the part. Best thing about it, is it’s still vintage somewhat, but bulletproof and capable of riding cross-country with an aftermarket windscreen. I’m still looking at some exhaust options and waiting on some expanding aluminum to form some side panels. Hopefully get some seat time in it, post on Ebay, then move on to the next one.”