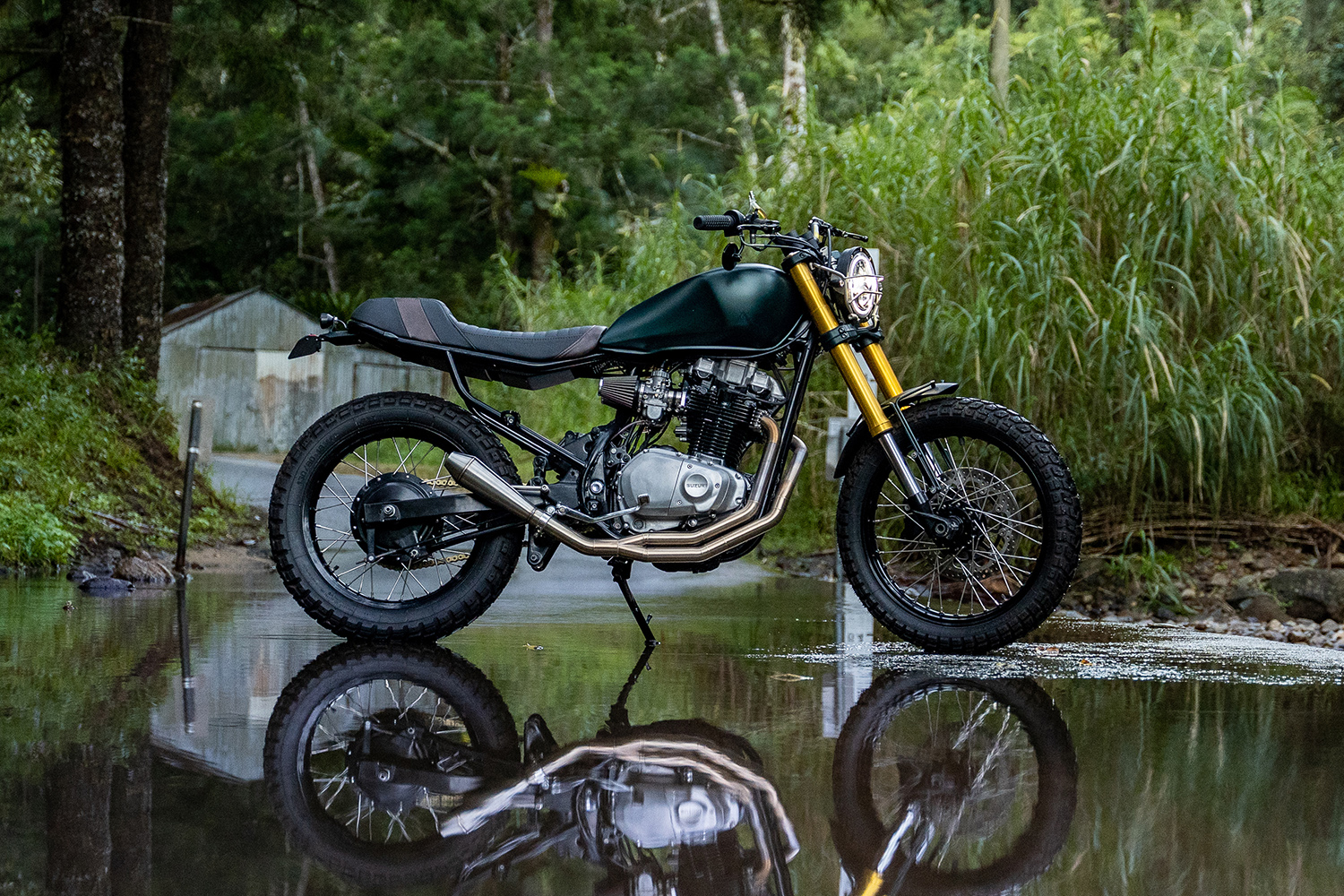 Less is more. That’s something we hear a lot when we talk about building custom bikes, especially anything built into a scrambler. That’s a difficult mantra to maintain when you’re working with the untraditional and stocky classic cruiser that is the 1983 Suzuki GR650, but with no surprise the team at Purpose Built Moto from Gold Coast in Australia accepted the challenge that resulted in the latest build to roll out of their garage.

Tom took sights on this donor bike after a customer, James, dumped the bike on his doorstep with dreams of turning it into a weekend wrangler. “The Suzuki GR650 came out as some sort of Pseudo cruiser with a 16” rear wheel, and a very relaxed ride position. It didn’t have much in the way of good looks. What it did have was a good frame, an early linkage mono-shock, a nice tank and a running motor. Everything else would be left up to us to make. So we got to work…”. If you want to see the level of work that went into this ground-up build, try Googling the stock model. You will be left in awe.

The Suzuki GR650 was left stored in a shed of the coastal town of Byron Bay, so rest-assured the first step for Purpose Built was to give it a complete clean to see exactly what they were dealing with. “The first thing it needed was a good scrub, then we tore it down, leaving only the rolling chassis and tank. Next we trimmed down the subframe, stripped the wheels, and measured up for a front end conversion.” The front-end was grafted from a 2018 BMW R310GS, taking the research and development that comes out of contemporary German-designed adventure and using it to breathe new life into this bygone bike. That, complemented with replacing the rear mono-shock, gives this GR the stance and capability that James was looking for – a custom Scrambler that he could throw his girlfriend on the back of and ride around town, or throw his leg over and hit some dirt roads out the back of Byron Bay.

To tie off the build’s shiny new legs, the front end was tastefully adorned with just the right amount of tech to remain true to the mantra. “The new front end was dressed with a set of Mid rise Pro-taper bars, Accossato Levers , Purpose Built Moto Switchgear and some Vans Style ODI Grips. The Lighting is a 7” Flashpoint Headlight with Black Hollow Tip Indicators used to mount it onto our custom made stainless steel cage. Using the Purpose Built Moto Fender kit, we fabbed up a floating front fender, with a good amount of clearance to sling mud around on one of those dirty Sunday adventures.”

With the new front and rear suspension ticked off the list, Tom set his sights to the wheels and tyres. “The 16” wheel on the rear was rebuilt with an 18” rear, retaining the 19” front. That gave us options when it came to off road tyres, ending up on a Hiedenau K60 Scout.” The subframe was kept longer to support a pillion, and the sleek frame was kept minimal with removable pillion pegs and a sleek looking seat for two. Tom shaped the fibreglass seat pan, running the electrics under the seat, and took aim on the tank. “The tank was slightly re-mounted so it wasn’t on such a lean back, and with that the silhouette of the bike was pretty much complete.”

It was now time to focus on the details. The Suzuki 650 twin received a top end rebuild to revitalise the near 40 year-old engine, among plugging up the archetypal oil leaks that come with classic bikes before the whole engine was cleaned, painted and detailed with some brush finish cases. Why stop there, right? Tom worked his way toward the air box, pausing at the carbs filled with off-smelling fuel and deciding without a shadow of a doubt to rip them out with the stock airbox and replace them with a set of Mikuni round slides with a set of DNA pod filters. With patient tuning, Tom added a few extra horses to this tame Japanese twin cruiser – but it still needed one last modification to transform the GR’s meek mumble into a resounding roar.

Like every good motorcycle builder, the Purpose Built Moto team are looking for new ways to challenge themselves and take their builds to the next level. For Tom, that comes in the form of experimenting with building custom exhausts. On his own admission, he had a fair bit of fun with this one. “Going for a 2-1 stainless steel header, that flows out one side of the frame under the right footpeg then up and out following the modified subframe line. The Torpedo muffler put just enough of a muzzle on this scrambler’s bark. The entire system has been tig welded, and brush finished to perfection.”

“Our GR650 weighed about 185kg before we got to slimming her down. That puts us at close to 170kg now… To finally get rid of the GR650’s laid back lifestyle, we measured out and lifted the rear suspension 25mm giving us better ground clearance for a more scrambler friendly geometry set up, and a bit more rear wheel travel.”

Tom and James landed on a deep metallic green for the main tank colour to bring a subtle bit of adventure into this build, with satin finish and some barely noticeable black detailing. The green carries from the fender mounts, triple clamp and onto the tank to add that little bit of detail to the entire build.

The finishing piece was the seat trim. To his own admission, Tom isn’t much of a fan of mixed colour combinations on leather. With black being the usual suspect, Tom figured with as many dark colours this Suzuki GR650 was carrying he could mix it up a little on the leather choice, throwing some vintage brown into the mix.

This GR650 Scrambler is an oddball and a stunner, that is a far cry from it’s 40 year-old self. Did you Google it? You could be seeing these two bikes side-by-side and you still wouldn’t know they were the same. As Tom says, the bike begs to be ridden, so let’s hope it doesn’t spend the next few years back in James’ Byron Bay shed again…