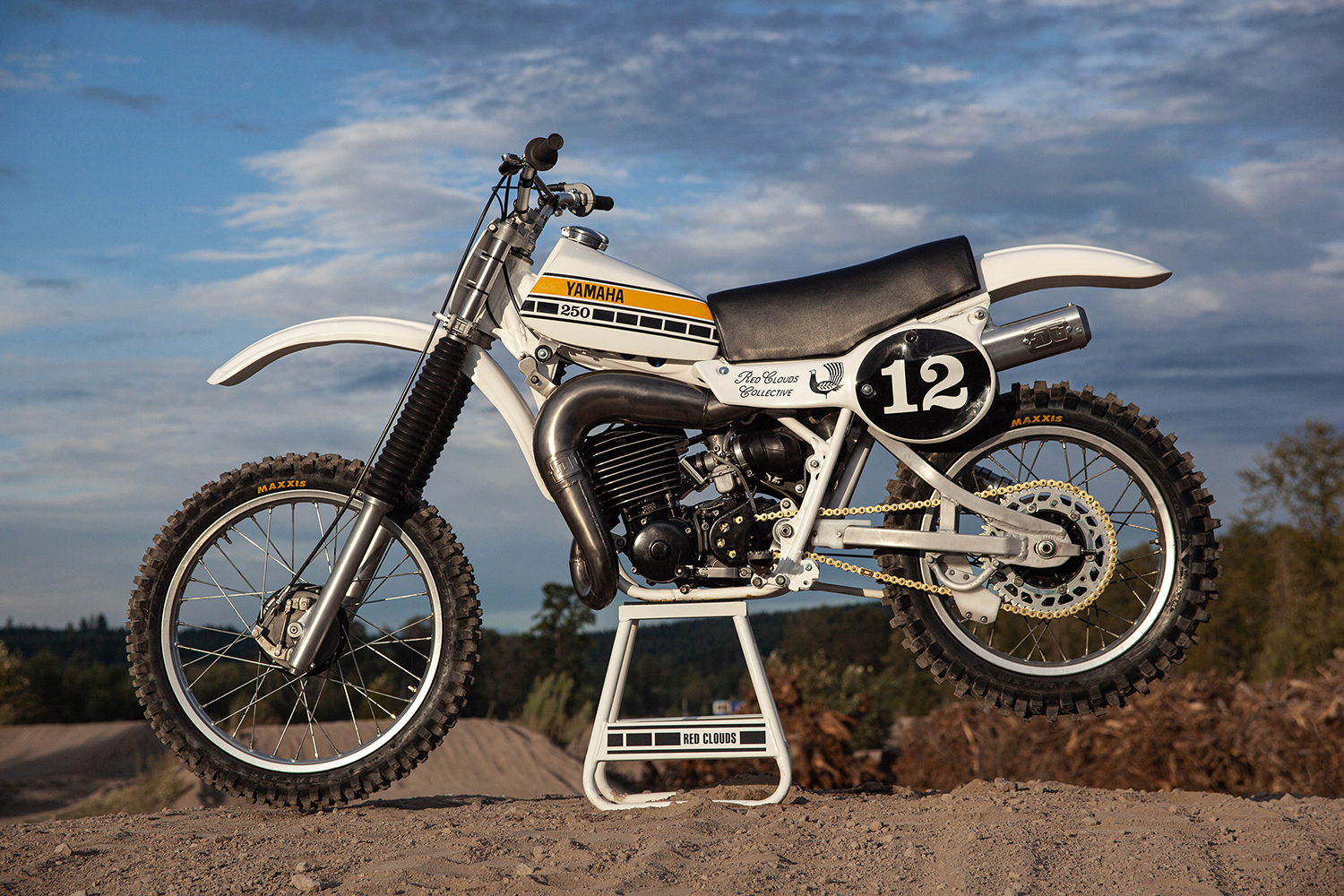 If you grow up near a speedway track it’s not long before curiosity will get the better of almost everyone in town at least once, drawn to the dust clouds, the sound of screaming engines and a crowd on the edge of their seats. But nothing can prepare you for the first time you take to the start line yourself, the sensory overload fills you with dread until the adrenaline of the first turn shoots through your veins and the addiction truly sets in. For brothers Seth and Casey Neefus of the Portland based Red Clouds Collective, a trip to High Desert MX had them hooked. Now they’ve reach vintage dirt track nirvana with their stunning 1979 Yamaha YZ250 that we’ve dubbed ‘Pure Massacre’.

The boys from the Pacific North West are more than just custom bike crazy, as Seth explains, “We make waxed canvas clothing, selvage denim pants and shirts and a variety of leather bags and wallets. Most of it is motorcycle and workwear inspired and everything is made in the USA. We just moved into a new Portland location which allows for us to manufacture all of our waxed canvas and leather products as well as it has enough space for us to set up a fabrication shop for welding, blast cabinets, etc.” So as much as they loved building bikes in their home garage the step up to a new facility is clearly providing outstanding results.

The story of the YZ starts with a trip to the High Desert MX where the boys took their own trail bikes for a little fun. “We did our practice laps and had huge smiles from ear to ear. The racing started and the people racing vintage bikes just made it look fun and the fact that they were on machines that were 30 or even 50 years old got us really inspired.” With great results on that first day, the Brothers decided they needed their own vintage machines so that they could race in the Pacific Northwest Vintage Motocross series. Seth found a YZ125 and when Casey’s search for a CR250 turned up a blank, they got a lead on the YZ250.

“The bike was located in Idaho, but the guy was willing to meet us halfway. So we met him in Pendleton, Oregon and gave the bike a quick test ride and I have never seen Casey smile that big and look that scared at the same time. It was a light and extremely powerful bike and we took it home with us back to Portland.” After familiarising themselves with the bike on the local track over the summer and into the fall, it was now time to give the bike the full build it deserved. Looking at photos of the old Factory Works machines they discovered there was a distinct look that was missing from their road going version.

But being a well used and abused dirt thrasher of more than 40 years in age, before they could even begin to pull it apart they had to give the bike the mother of all cleans. Not wanting to risk any mud dropping into the engine the brothers powered up the high pressure hose, hit it with general-purpose cleaner and degreaser and then took to every surface with a scotch brite pad. It doesn’t end there, however, next it was time to vapour blast just about every part of the motorcycle, with the frame and larger components given the sandblast treatment. Finally, the ’79 frame could be given a fresh coat of white powder and work could really begin.

Taking inspiration from the bikes of wildman Hurricane Bob Hannah, a member of the AMA Motorcycle Hall of Fame, the boys decided to ditch the plastic tank look for a metal item, and go their own way on colour, the hyper yellow of Yamaha begone! “We found a rusty and dented stainless steel tank on eBay that was for a different year YZ250, but we were able to make new mounting brackets to securely fasten the tank to the frame,” Seth tells us. But it was in shocking condition and countless hours were spent pulling dents, straightening the sides, and preparing it for paint.

Into the booth with the rest of the bodywork and the results speak for themselves, the clean and pure creamy white defies the angry nature of the beast. While the black and hint of yellow in the graphics package give the YZ a truly race ready look with a unique finish that will leave spectators in no doubt that this is the RCC machine. The lines of the seat get you all nostalgic for a time when padding actually existed on a dirt bike and trimmed up in black it fits in perfectly with the overall aesthetic. New MX bars are fitted up with all new controls and grips, with only the bare basics added to keep weight featherlight.

The rebuilt engine looks and runs a treat with all the work the boys have put into it. But it’s the all new DG chamber and silencer that gives it the million-dollar appearance and absolutely screams when the throttle is pinned to full noise. The suspension has been overhauled at each end, staying true to the vintage aesthetic, while a new set of Maxxis tires do their best to hang on in the corners, just like the rider smiling from ear to ear! So what was the biggest challenge of the build? “Honestly, the hardest part was waiting to get out and cover it in mud before we had a chance to shoot photos of it,” Seth laughs! But in chasing their dream of racing a magnificent vintage machine, the brothers of the Red Clouds Collective have built a motorcycle capable of recreating Hurricane Hannah’s elbow out, no prisoners taken style, it’s going to be a ‘Pure Massacre’ on the dirt tracks of Oregon.