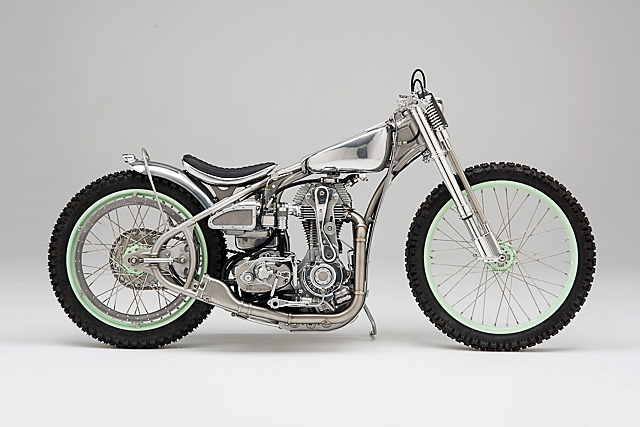 The saying “it’s in his blood” gets thrown around a lot when sons follow in their father’s footsteps. But Jeremy Cupp of LC Fabrications must have the blood of a thousand men, because to single-handedly create this masterpiece and do it from scratch takes skills surely not possible for one man to possess in a life time. But that is exactly what he has done in creating this Harley Davidson CAC factory speedway inspired machine from entirely handcrafted components and a drivetrain that is part Buell, part Ducati and with cog swapping courtesy of Triumph. Yes, really. Coming from a separated family, Jeremy had one father a welder and the other a machinist and from an early age he was building his own bikes.“Taking a pile of raw materials and turning it into something that can take you where you want to go – it doubled the spiritual act of riding a motorcycle and really got me hooked.”

The end result after more than a decade of honing his craft has culminated (for now) into this one-off machine the man himself calls Seven. The build began in LC Fabrications typical fashion “I started as always with an engine and wheels” the engine I’ll get to soon but the wheels define much of the way the frame and suspension is built on such a project. The front is a D.I.D 23inch, the unusual size once fitted to a short run of Honda XR’s, while the rear is a 21inch Harley item. With the hubs and rims finished in coral green together they give the tall, narrow look of the early speedway machines and the multi-purpose rubber only adds to the timeless feel. Typical of speedway racers there is no front brake but the rear is a beaut, a Buell like perimeter rotor using two separate Jaybrake calipers and two separate master cylinders, the footbrake is used for primary operation while the hand brake allows the bike to be held in place on any incline. Being the tremendous fabricator he is the rigid frame is of Jeremy’s own construction and is a masterclass of welding perfection and impeccable design. Studying the images of this loop style frame, lugged and crafted from .120 DOM (drawn over mandrel) steel the lines are simple and yet the quality leaves you asking “how does he do it”. This was the first bike to be built-in the new LC Fabrications shop and wanting an upholstered seat to sit, as if floating, above his new frame Jeremy decided the new shop needed a sewing machine. In the past he’s used heavily tooled leather but with the new piece of equipment he taught himself to sew and knocked out this stunning solo seat. Beneath it is another incredible creation, a hand fabricated oil tank that on the other side of the seat is a custom airbox for the single carb. The tank, fenders and the rest of the sheet metal is all polished aluminium of Jeremy’s making, but the story behind it is best told by the man himself. “At AMD 2012 Robin asked about my square tank design on Old Black (Another LC Fabrications build) I told him that I didn’t know how to shape sheet metal so square tanks were all that I could do. When the article was published it seemed (to me anyway) to be written entirely on the fact that I could shape metal. This gave me the motivation to learn, and not only learn but to do this one as polished, so obviously no filler was used. I would like to thank Jo Cooper for answering all of my questions through that learning curve” and clearly the results show Jeremy is one hell of a fast learner! Seven is a spectacular build, but the engine alone is worthy of a cover story and only studying it for hours on end will you truly appreciate just what a feat this is. Sticking with the theme of the old Harley CAC the engine had to be a vertical single, but buying an off the shelf reproduction J.A.P engine or similar is just not the way Jeremy works. He did however remember that a few years back Chris Barber had made his own engine, known as the Desmohog, it used a Harley bottom end with Axtell Barrels and Ducati 900ss heads to create an American V-Twin with Italian Desmo Heads. Jeremy has adapted that idea and simply worked his magic to create one of the most impressive none production engines you’re ever likely to see.

A combination of Buell Blast bottom end for the single cylinder, a Ducati cylinder head, a Triumph gearbox and a whole lot of Jeremy Cupp brilliance result in this masterpiece. “The entire cam-chest was modified to use a series of idler gears to drive the lower belt pulley, and the Ducati cylinder head had to be heavily modified to take its place on top of the factory Buell cylinder.” That Buell is 492cc of Air-Cooled American but to get it to stand up vertically and not have a forward lean Jeremy back-halfed the cases and then ingeniously mated up a pre unit Triumph gearbox that he modified to use a hydraulic clutch slave from a late-model Triumph. Not only is this the marrying of three manufactures components, a mix of old and new, the work Jeremy has done to produce a functioning engine of this kind that looks so good is remarkable. The exposed belt drive will have Ducatisti fawning and the single exhaust is testament to Jeremy’s lifelong pursuit of welding perfection. The suspension, like the rest of the build, is a one-off Cupp creation and is simply mind-blowing. Jeremy wanted the springer look and it’s easy to see why, it suits so well the overall theme of the bike, but he also wanted a front end that handled well. So he set about engineering and building a unique creation that he calls a hydro-springer. The rear legs are Showa 32mm inverted items that have the springs removed so that they operate exclusively as a dampening component of the front end. The load is carried by the twin spring forward legs with the design ensuring spring and shock work together as if one. All the linkages and other componentry to make this possible were not only made in-house but as well as being extremely functional look a million dollars. For a select lucky few Cupp has decided to make a limited run in stock HD narrowglide configuration, get in quick! The end result is a motorcycle that neither words nor pictures can truly do justice, but they give us enough insight to truly appreciate the unbelievable talents of Jeremy Cupp. For now LC Fabrications remains a one man operation producing one or two bikes a year. He has his own product line that is available around the world through a number of distributors and with the help of his wife and kids Jeremy packages up and ships off every single part that he has personally designed, manufactured and assembled. It’s fair to say that despite his fearsome talents he’s still got his feet on the ground and we can only wait with bated breath to see what this modern-day Renaissance man will produce next.