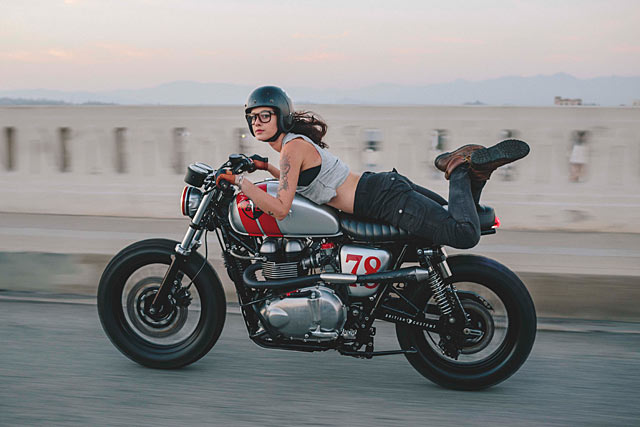 Time for a quick confession. Shaik Ridzwan was probably the first photographer featured on Pipeburn who really made us sit up and take notice. Yes, the fact that he also shot Max Hazan’s bikes can’t have hurt things – but in my mind Shaik was the one who opened our eyes to the fact that shooting bikes could be a whole lot more than wheeling it out on the driveway and telling the local kids to get out of the shot. Here’s a collection of his best ever photos, assembled by the man himself. Can you introduce yourself?
My name is Shaik Ridzwan. I’m originally from Kuala Lumpur, Malaysia. I moved to the U.S.  in the fall of 2000 and currently live in Los Angeles with my wife Elizabeth and son Micah. I’m an Industrial designer by profession, however I tend towards more photography and creative direction these days. In 2011 I began a creative studio called The Mighty Motor and have been doing it ever since. The studio revolves around story telling and documentary style content creation. As a kid I grew up surrounded by adventuresome role models and even greater story tellers. Photography and motorsports were a constant in my young life. Those two disciplines coupled with the art of telling a good story formed the basis of The Mighty Motor. Why shoot motorcycles?
When I began The Mighty Motor, photographing the bikes was a natural necessity of the documentation process. The interview needed more than just words to communicate the scene. The camera paired nicely with quick design sketches and was just a natural and logical step for me to form a complete experience for the viewers. All together these are the elements that I Iove. Nature, speed and design. Do you shoot any other subject matter?
I mix it up with some fashion, lifestyle, cars and sports. I love motion. What’s your go-to camera and lens?
First there’s my Canon 6D with a 35mm 1.4 L – the best work horse camera with wifi, paired with one of the best lenses Canon makes. I carry it everywhere and have used it for years. It’s such a joy to shoot. Second, I use a 5D on jobs.

Nikon FE2 with a 50mm 1.8 – this is my referee. I carry it with me on every shoot. This camera will tell me if I did a good job capturing the moment. It reminds me to first get the picture. Post production is nothing if you can’t first get a good photo. That is just how I was taught. I’ve always been inspired by combat photographers like Larry Burrows and Sir Don McCullin. This is also the same setup as my first camera when I was a kid. Lastly, my Mamiya 645 Pro TL with a Sekor 80mm 1.9 because… medium format Mamiya. This camera travels with me on jobs and only comes out when I have a little more time to set up the shot. The images that it captures are pure magic. When I manage to get it, that is. What’s the best and worst things about shooting motos?
The best thing is capturing people while pursuing their passion. Whether its documenting a custom build, shooting the intensity of friends ripping around the track or simple snapshots of a rider on the street, it’s all about representing that happiness. The worse is separating work and play. When I’m shooting I don’t ride. When I ride I don’t shoot. My opinion is, choose one and do it right, otherwise it leads to weak results. Experiencing the moment and capturing the moment has always been hard for me to separate. For me, I feel it’s best to put my full attention on one thing and feel it completely. I am still learning everyday. What’s you’re favourite bike from the past few years?
Very tough one. I photograph Max Hazan’s builds and we have become very close friends through the years so its hard not to include his creations as my favorites. Another close friend Mike Vienne builds some beautiful racers just a floor above Max’s studio. Have to give it to Shinya as well. He never stops creating. Year after year. Under the gun, If I had to pick a bike that really blows me away it would be the Suter MMX 500 (a 4 cylinder 2 stroke bike with 196 hp and 127kg) in the beautiful Rothsman Honda livery. It’s a mix of everything I love all in one package. It is a marriage between the golden years of 500 GP racing and sharp modern design innovation. It reminds me of when I was a kid watching Wayne Gardner race in Shah Alam circuit. I am sure Max would agree with this one.