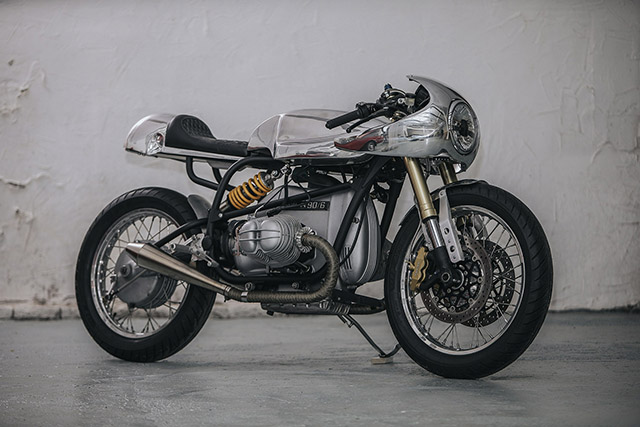 Life is filled with many simple joys and one of them is to observe a true master craftsman at work. The artisan is found all over the world, the watchmaker with his intricate tools in Switzerland to the Balinese woodcarver sitting on the floor performing his magic. While many of us repair and restore their works, they create true art from the most basic materials in a way that seems almost mystical. And so we find amongst the forest in the small hamlet of Olivebridge, New York, Nick Cologero shaping metal into masterpieces. The latest build to roll out of the Catskill Mountain Customs Inc. workshop is a BMW R90 cafe racer that’s simply sublime. 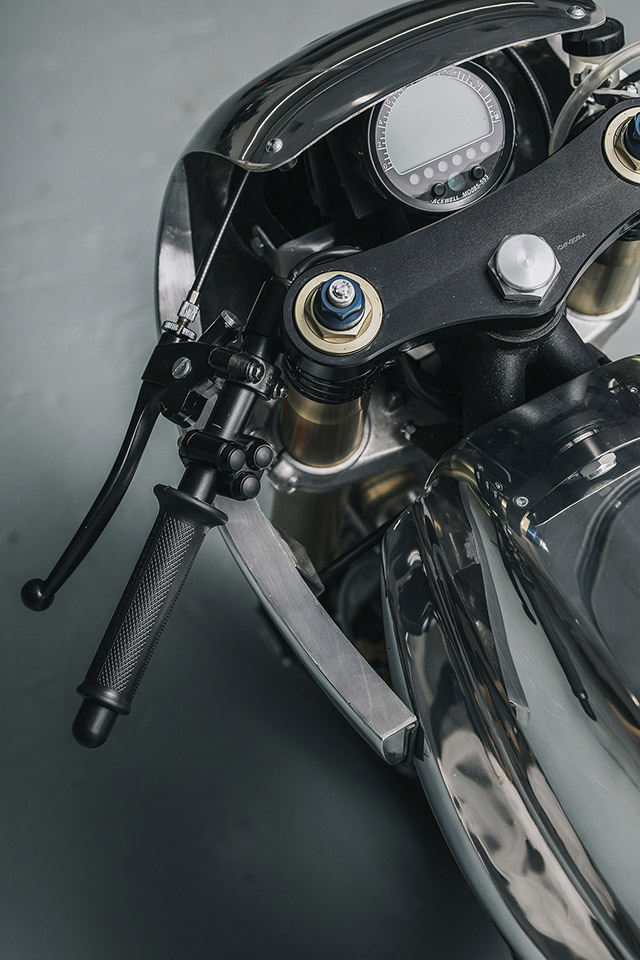 By day Nick is a firefighter, but you can’t escape your greatest talent and so his spare time is spent in the workshop, building bikes, but first and foremost he’s a metal shaper. “ In early 2016 I finished up a little CB350 scrambler and took it down to a local bike night where the owner of this BMW took notice. Over the next few years he kept tabs on my work until the timing was right to turn the BMW over to me. The owner told me about the history of the bike, belonging to a friend of his, and how he took it over in poor condition with the promise of resurrecting it into a cafe racer,” Nick tells us. 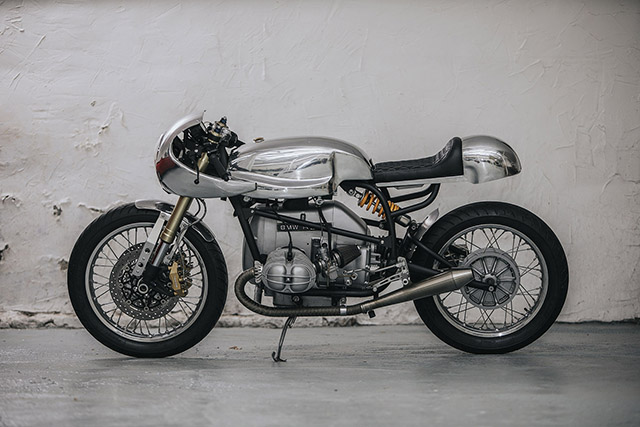 The client gave Nick almost complete creative control, but before he could ply his signature trade he’d first have to turn the crusty R into a respectable roller. Not one to do things half-hearted that meant a total overhaul of the BMW chassis and it begins at the rear with the stock subframe cut away and a new shorter and more shapely unit fabricated and welded in place. While the main chassis is smoothed out to perfection and to improve the rigidity of the decades old frame, removable braces are added before a textured satin powder coat was laid down. 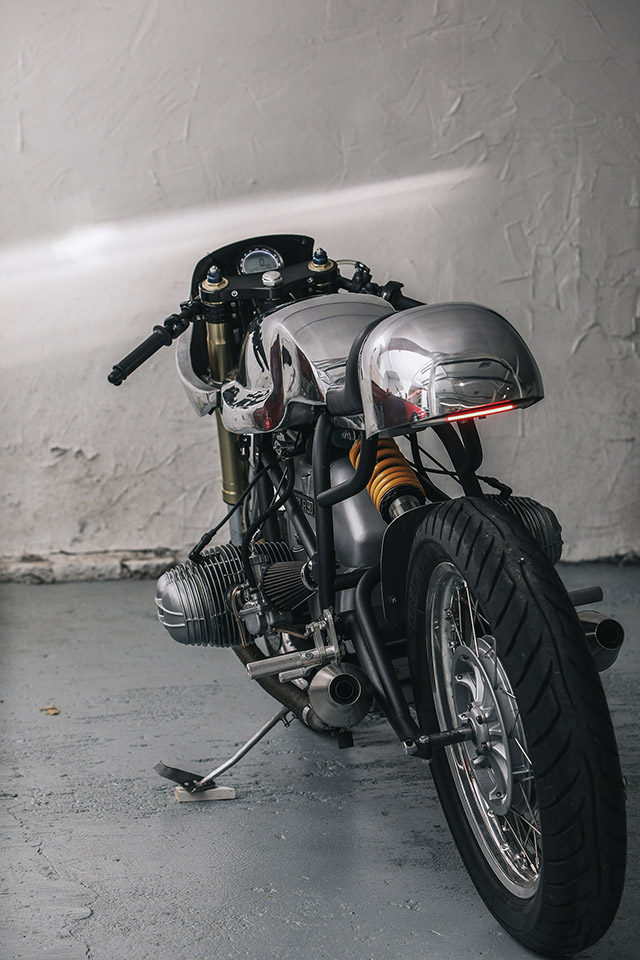 Next on the list was getting the suspension sorted and the plan was to turn the bike into a mono-shock rear. Frame matching tube is used to turn the swingarm into one that is capable of holding the Sachs shock in place taken from a Ducati. Upfront and a set of Suzuki GSXR 600 forks are held in place with a Cognito Moto steering stem and upper triple clamp. While also lending their considerable braking power, with a CM hub allowing the stock rim to be laced with Buchanan’s stainless spokes. A rebuilt rear hub and polished rim get the same treatment with both ends wrapped in Avon rubber. 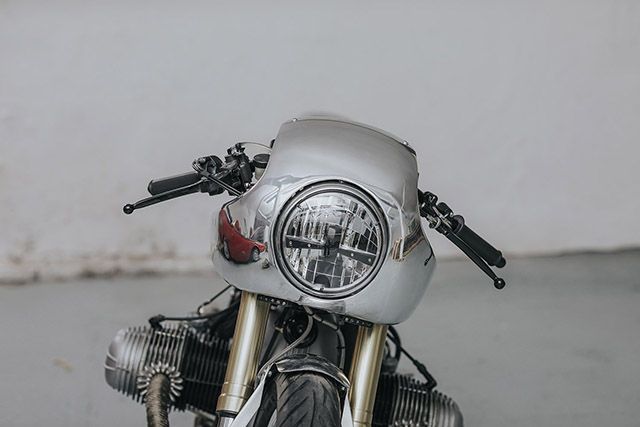 Now Nick really had something befitting of his metal shaping skills and the first part to get right was the fuel tank. “I had an idea for a tank loosely based on the Ducati Imola design, but with accentuated features. After getting the design worked out in foam I got to work hammering it out,” he explains. The beautiful result is easy for the eyes to see, with the details just as impressive and uninterrupted in raw metal like the weld for the bronze fuel filler cap. The cafe tail was the obvious complimenting feature, but its extra width gives a stunning feminine shape. 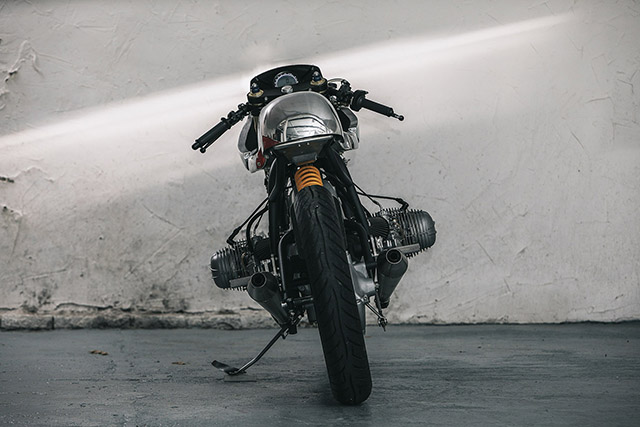 The front fairing wasn’t part of the original design, but it seemed a no brainer to finish off the hourglass figure with its sides running back along the tank. The Prodigy Performance Coatings black finish frame brilliantly contrast Nick’s polished work and “The diamond-stitched leather seat, shaped and upholstered in-house by my wife, pairs with the folding aluminum rearsets and billet aluminum clip-ons to put the rider in position, ready to tackle the curves of our local mountain roads.” 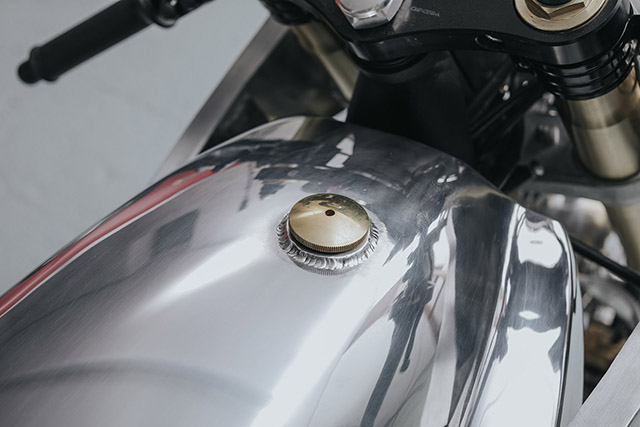 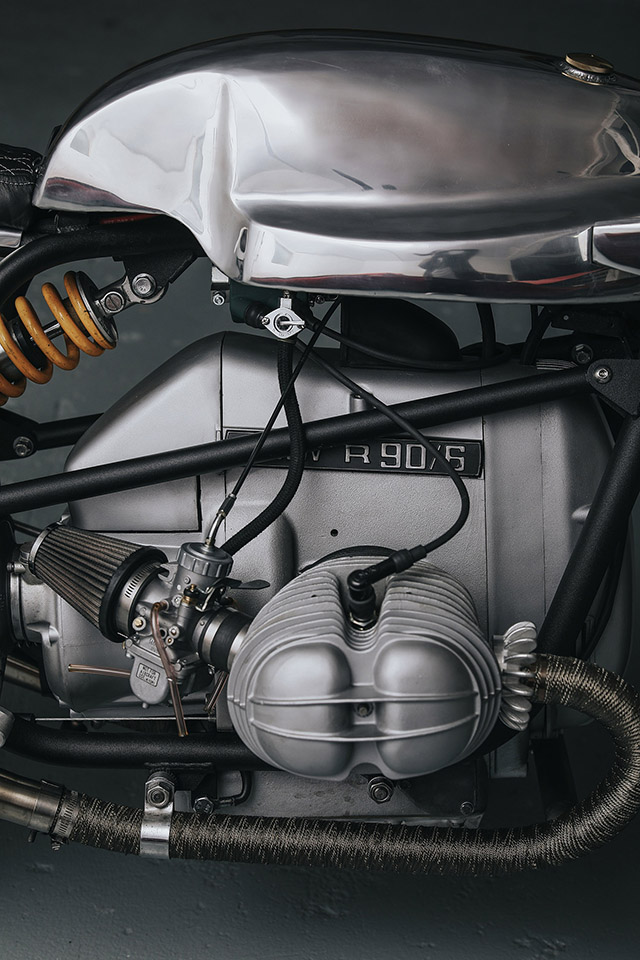 To keep everything neat a new harness has been built to wire up the bike and is based around a Motogadget m-unit. A tiny Shorai battery and LED lighting help to complete the electrical setup with billet aluminium switches. Everything mounted on the bars is high end and the Acewell Speedometer gives the rider all the information they could need. The artisan has completed another masterpiece that functions at a level that matches its glorious form and for Nick there is an extra little pleasure, “I am especially happy that this bike will be residing nearby, so I can pop over for the occasional rip!” 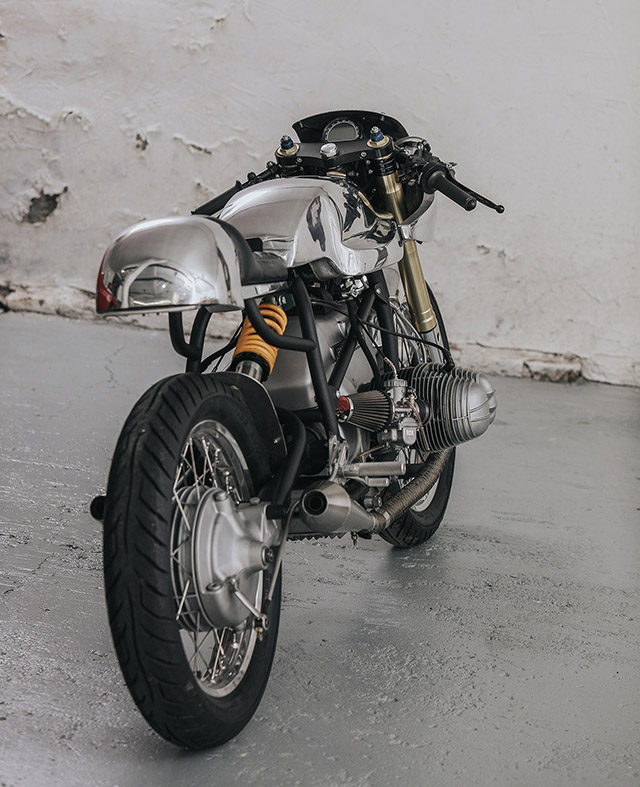 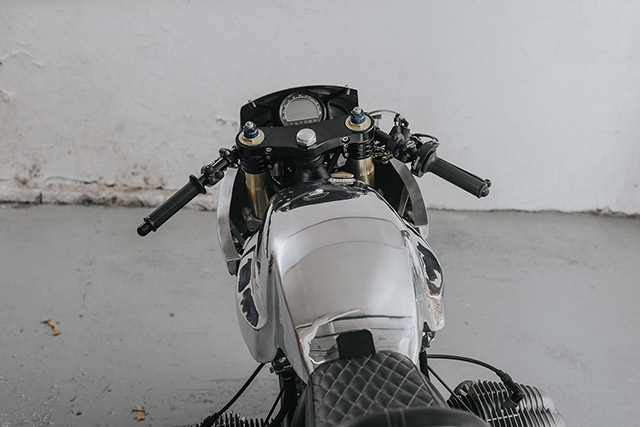 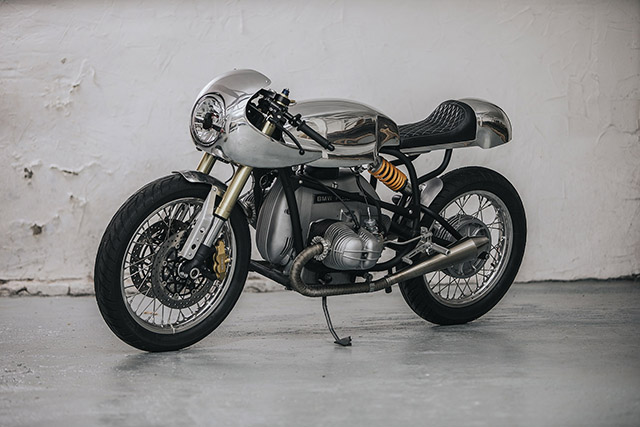 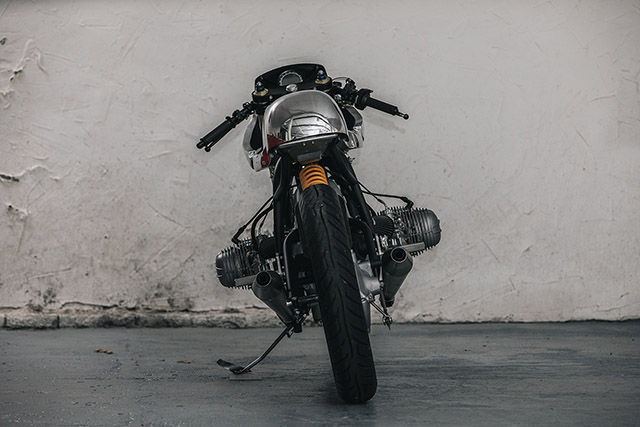