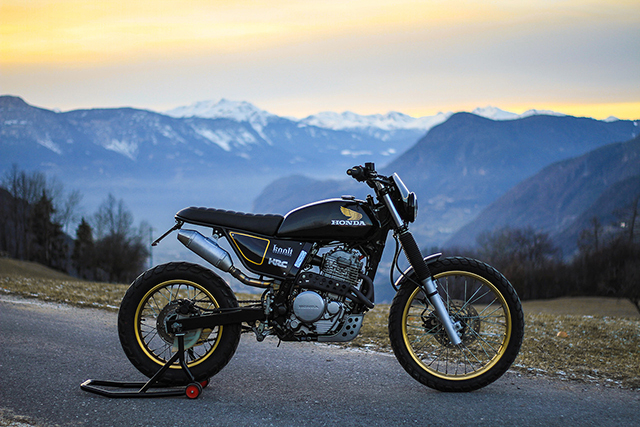 It wasn’t so long ago that walking into a motorcycle dealership with a handful of cash, large or small, was not only your ticket to fun and freedom but also a healthy dose of antisocial behaviour that put a smile on your dial. Whether that was sticking your new ride sideways into a corner, spinning the back tyre or popping a wheelie, it was all just a twist of the throttle away. Try that on most new bikes and a cornucopia of flashing lights on the dash will tell you, ‘computer says no’. So to get back to the simple joys of life on two wheels, Stefan Lantschner of Koolt Creations, loves nothing more than turning lightweight singles like this Honda Dominator into uninhibited pleasure machines. 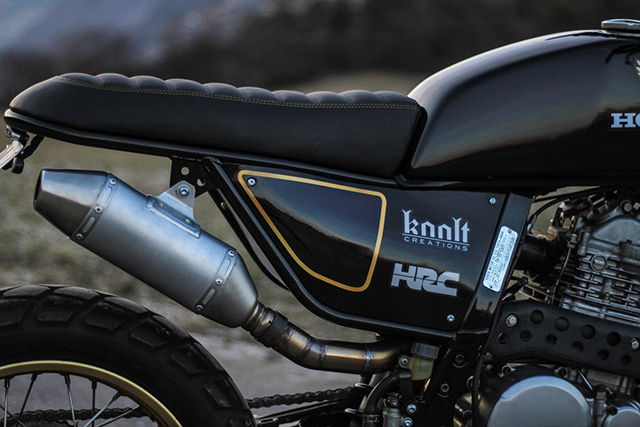 Stefan is an Italian who calls Barcelona home and when he’s not at his day job working as a videographer, he’s spinning the spanners turning the sweet simple bikes of thirty years ago into good looking thrill rides. But while he was working away on another project, a stunning Yamaha XT600, the Honda sat on the sidelines. “After I picked up the Domi from my friend in Verona I left it over a year in the garage… my friend Alberto said he wants the bike for next summer so I had to get started!”

At first, the idea was just to do a simple makeover, put a new seat on, change the gas tank and fit a cleaner headlight. But this was one of those projects that once it commenced and Stefan saw the potential, he kept stepping up the quality and level of modification to ensure nothing was left half done. This was all triggered by the first cut to the frame, initially small so as just to add a rear hoop, he returned the angle grinder to the metal and cut the whole subframe clean off! Then wanting to do a thorough job fabricating the new rear, the engine was removed and everything stripped off the frame. 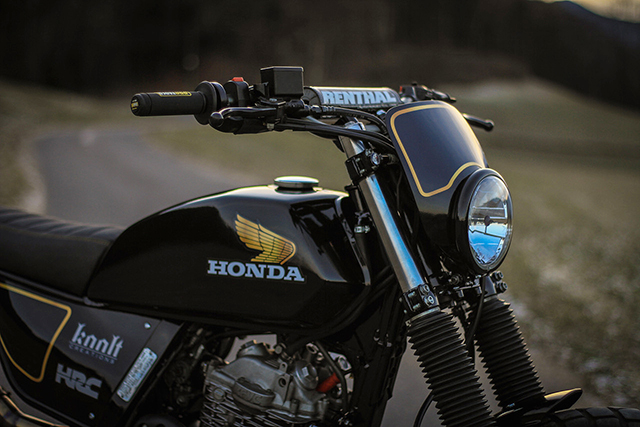 Being able to now flip the chassis upside down and in any direction allowed Stefan to lay the perfect welds on his new subframe and it also meant designing and fabricating the mounts for the Honda CG125 gas tank was that much easier. With the modifications done, the frame was first sent out to be sand blasted and then given a hard-wearing layer of black powder coat. With the frame back in his hands looking a treat, there was no way he could start piecing it together with manky nuts and bolts, so they were either refurbished or replaced.

Sitting perfectly on the newly rebuilt frame is a two-up leather seat with graphics matching gold stitching for an extra touch of class. But with the tank back on the bike and a traditional round headlight bolted up, it all looked a little unfinished for Stefan and left him nowhere to hide the wiring. So knowing he needed to make some more bodywork he asked his friend at Nik’s Motorcycle if he could have a go of his English Wheel, “I was pretty hyped about the result from the side panels and the front light panel for using it for the first time!” 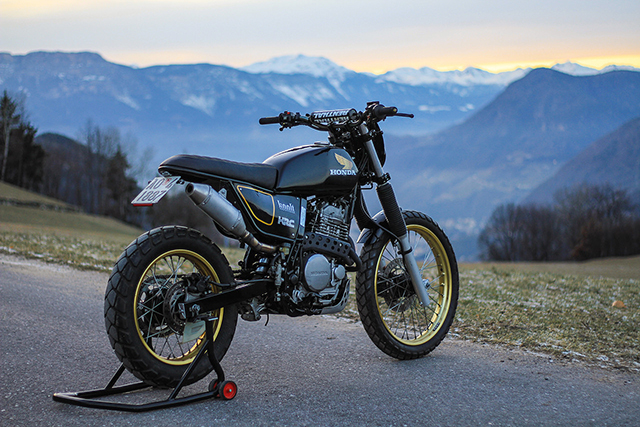 With the tins all out for paint, Stefan and his friend Salva got to work on the electrics, splitting the system in two, with the CDI hidden under the seat and the rest remaining in the factory location upfront. The headlight cowl allows for a much neater installation and a mix of Pro Taper and Renthal takes care of the controls, with new switchgear replacing the now junked factory parts. At the rear, a new number plate bracket supports an array of lights, with tiny LED indicators keeping things as tidy as the front end. 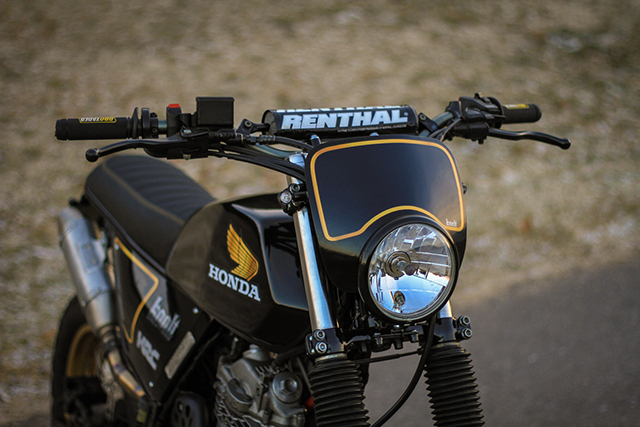 But the reason for picking the Dominator in the first place was always that thumping 644cc, 4 valve, single. With torque all through the rev range, it comes alive at 3000rpm allowing the rider to get silly for some controllable chaos and Stefan only wanted more. So having struggled to get a perfect tune on his last big single build, the Honda keeps the airbox to feed constant air to the rebuilt carby. While on the other side of the motor a CRF muffler was used for sight and sound, with Christopher Martensson fabricating the beautiful 2-1 collector pipe from the headers. 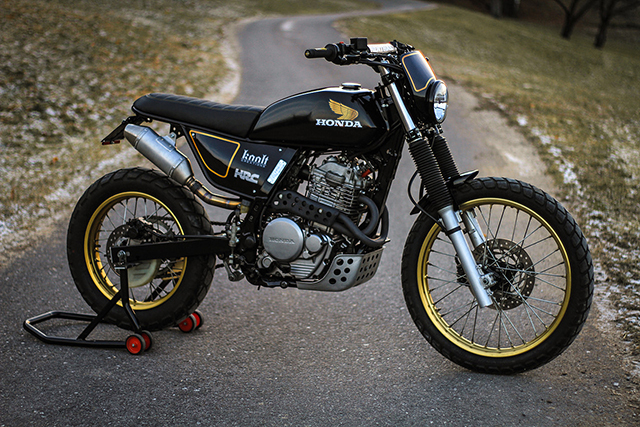 To add to the looks, Stefan designed and attached his own simple and clean graphics package. While the refurbished suspension and brakes, repainted triple trees and new rear spring makes sure the Dominator does everything just as it should! The alloy rims have been coated to match the trim colour and wrapped up in dual-sport rubber the Domi, like its factory father, is comfortable in almost any conditions. “In the end I am pretty happy with how this Scrambler for my friend Albi turned out and believe me this thing wheelies really well!” Stefan smiles. And with no computer to dictate the thrill factor only your skill and your ability to hold your nerve can get in the way of enjoying this magnificent machine to its full, fun-filled potential.