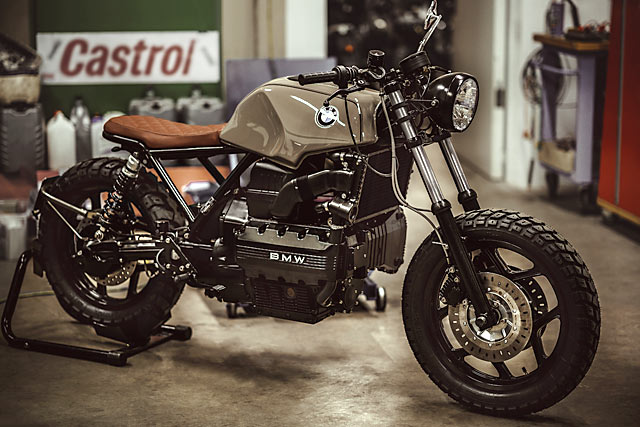 Ah, the K-series BMWs. What can we say that hasn’t already been said before? Their unique engines. Their incredible second-hand affordability. And then there’s all that get up and go! Even a very tired example of a K100 will deliver you 85hp and 80Nm of torques – and for little more cash than a boozy weekend away with friends. Of course, this isn’t exactly a revelation. The sheer number of them we now see gracing our pages is a testament to this. Hell, we’ve seen less virgins at a Minecraft show. But just when you think you’ve seen them all, along comes Austria’s NCT Motorcycles with something that piques our interests like no other Brick has done in a very long while. Say hallo to ‘Sir Ulrich’. Like most places, decent quality donor motorcycles for custom projects are getting rare in Austria. So NCT are driven to grab nearly every half decent bike they can get their hands on. As long as the engine is working and it’s not too ratty, the bike is snapped up, and quick. “We got the 1990 donor BMW from the forecourt of a little old farm in our area,” says NCT’s übermensch, David Widmann.

Then, like a big night on the town, the whole she-bang started with a first-class strip job. “We started try disassembling the whole bike,” says Dave. “After we gave the engine a complete overhaul, we removed it and painted it in a semigloss black.” And with the aforementioned brick now freed from its bent tube cage, Dave and the team started to revise the frame. “We handmade a new rear frame and then created a seat to fit on top. It was then covered with the light brown leather you see here.” After that, they sent the frame and the wheels ‘on a little journey’ which, judging by their badass black power coated finish, wasn’t as ominous as it sounds. The BMW’s brake system then got a new lease of life with parts from some company called ‘Brembo’. We’re guessing you may have heard of them before. But clearly the highlight of this stage of the build was the tank. “As you can see, it’s the centerpiece of the build,” says Dave. Manuel, their spray sensei, clearly did an incredible job on its very cool grey colour scheme. The engine then received a shiny new exhaust that was made in-house and crowned with a slip-on can from a top third-party supplier. After an internal struggle with the age-old ‘to fender or not to fender’ question, David settled in the latter’s camp. “In our view, the bike should only be ridden on sunny days. It’s just not an all-weather bike. This is one of the reasons why we didn’t put fenders on it.”

Speaking of which, let’s talk wheels. They are Heidenau K60s, and by all the reports out of the Austrian shop, they give the bike some really good on road ride-ability with the back-pocket option of a little loose dirt skylarking if the mood so takes you. “We renewed the whole electrical system by adding a brand new Motogadget m-unit and a fresh lithium battery. A nice bonus feature with the m-unit is the ability to install a keyless go and alarm system, which we did.” Then the old BMW bars got replaced by a new set from LSL. To this, Dave added a new Motogadget m-switch system and a smattering of other high quality components straight outta the brand’s drool-worthy catalogue.

“Then the old front light got replaced and upgraded with a new CNC-routed mount. The turn signals and the rear light were also replaced with new units and the speedometer is from Acewell. The pegs got another LSL upgrade, while the strut is from YSS and the license plate mounting was handmade out of stainless steel.” So what inspired the team to make the bike look as good as it does? “For this build it was the client who had all the great ideas for the bike, and we were happy to help him realise them,” says David. “He specifically mentioned the style, the colour of the seat and the colour of the tank.” So he gave NCT his ideas and they implemented them. Then, when they had any lightbulb moments that inspired them, they’d just get in touch with the German-based customer to gauge his reaction. Clearly the process worked, and it worked well. With about as much surprise as finding a pot belly at a Harley show, Dave says that the hardest part of building the bike was redoing that damn Bavarian wiring and getting the Motogadget goodies going. So naturally, David gave the job to an underling. “I’ve got to admit, it’s a real nightmare of a job, but he got there in the end. He really proved himself and I count myself lucky to have guys like him working with me.” “Of course, my favourite part is the tank,” David smiles. “The colour scheme is a very special one that we’re really proud of, and just makes the rest of the bike look amazing. It’s also plays an important role in creating the bike’s strict lines; it’s something that we have always really focused on with all our other builds.”

Clearly, he ain’t kidding. Tanks like the BMW K100’s, designed to mate with now non-existent plastic panels, are total bastards to get looking right. But as you can see here, it’s all come together rather nicely. Impressed? You better bloody believe it. And we’re more than a little excited what these awesome Austrians come up with next.