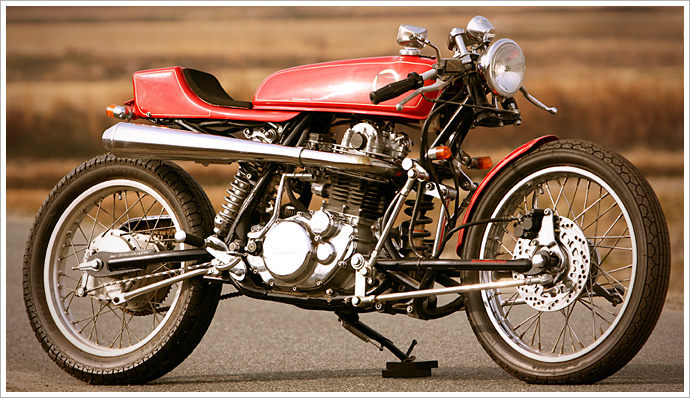 All we know is not very much at all. We spotted this bike on Silodrome a few days ago, and they are as perplexed as us. The only source of info we’ve found is off of a Japanese SR400 fansite called The SR Times and as anyone who’s ever tried to translate Japanese to English using Google Translate will know, the technology isn’t quite there just yet. Not by a bloody country mile. Still, we’re going to give it a bash anyways. Almost every part of the bike is bespoke. The tank is off of a Honda Dream 50. The (s)exhaust is also bespoke, but the internals are from an XS650. The more attentive of you will have by now noticed the hub-centre front steering. It appears to be a bimota unit that has been adapted to fit the SR. “Masterstroke” is the word that come to my mind – and I don’t say that lightly.

In an amazing work of complementary contrast, the rest of the bike has some beautifully understated and very traditional cafe features including the bars, instruments, fibreglass and exhaust. But don’t be fooled, the rear swingarm and suspension is almost as far out there as the front. Almost, but not quite. The rest of the translation is pretty much incomprehensible clap trap. Or as it says on the site, “full bleed beautifully compact body of the SR a strong impact, as the machine cool finish. Although it is often focused on the height of originality to go, what to sense, the true value of the Skull motorcycle he actually exists.”

I think there’s something in that for all of us…

PS. Hide your boobs with style. Check out our range of bespoke tees in the Pipeburn store.