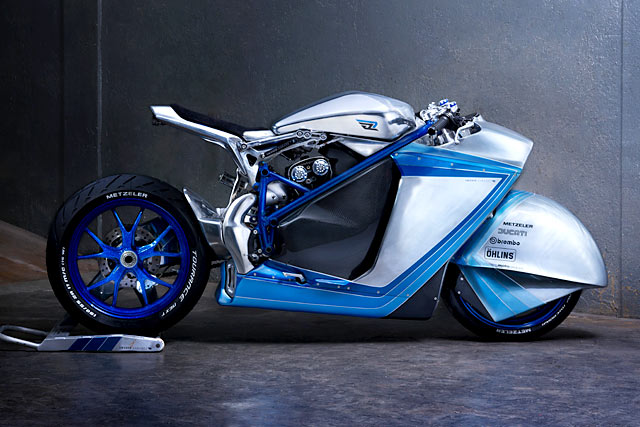 Validation is the feedback from others that you have been seen, heard, recognised and appreciated. But it first requires that you were right in your approach and successful in your endeavour. Killing two birds with one stone is this outrageously incredible machine by Indonesia’s Smoked Garage. Clearly, they were wondering if they could build a world-class custom bike and if a one man scooter shop in paradise could become an international success. The answer is a resounding yes to both, and this 2015 Ducati Street Fighter 848 built in Bali is a Neo-Racer the likes of which has never been seen before. A number of years ago I was interviewing Dennis McCarthy, the man behind the majority of the custom cars seen in the Fast and the Furious franchise. I asked him why he’d never pushed to include a radical custom bike. Given the enormous popularity of wild Sportsbikes at the time in the US and the emergence of the custom culture it seemed an obvious fit. Not to Mr McCarthy, who took the attitude that bike builders just weren’t up to pulling off a machine truly capable of standing out on the big screen.

But from his humble beginnings as a one man shop to internationally acclaimed head honcho of the Smoked Garage empire, Nicko Eigert has created a ride that would be right at home with Brian or Dom aboard. Known as the ‘SG-848X’, Nicko reveals the rationale behind the bike. “We always wanted to build something outside of the box. We were building a lot of cafe racers and we wanted to build something that really explained our history with the drag strip, racing, quality and our passion for bikes. Also, we wanted to experiment with some unusual materials that we felt were suited to this build.”

The bike that would be the canvas was chosen by head of Smoked Garage Australia, Shane, when he turned up at the Bali HQ on the stock Ducati and told the boys to try it out. Immediately the crew of more than fifteen men and women fell in love and the shop had a new project of their own that would enable them to display their full breadth of talent. To assist with the look, they reached out to Nico Design from Semarang to come up with a 2D drawing of the overall bike and many of its additional parts. Then it was time to create a scale 3D model of the entire bike, with the foam mouldings to be used as reference and templates for each and every part of the finished bike. This was the basis of the truly unique, hand beaten aluminium bodywork. The process took seven men, working 12 hour days, a full month to complete. The finished panels were bolted up and the bike was ridden for two weeks to ensure a perfect fit with no issues. The front guard is reminiscent of those fitted to a land speed bike, while the side fairings seem to create a liquid metal exoskeleton protecting the SG-848X from any incoming attack. The carbon fibre paneling helps with the futuristic feel and allowed Smoked Garage to highlight their ability to work with materials both old and new. But Nicko was still looking for a way to go above and beyond, and the idea came as they were creating the seat and tank pieces. First the airbox was covered in a polished alloy skin, with a relief for the radiator filler, before a new outer tank was fabricated to mount over the top. Likewise the seat comprises a lower and upper section that is supported by CNC machined billet aluminium. Then came the true genius, the hinged and gas-strut-supported opening mechanism that allows the tank full of fuel and the upper seat section to rise above the rest of the bike like Lazarus. On first inspection, I’d wrongly assumed it was the fuel tank skin and not the full tank, but look very closely and you realise that the fuel lines and associated plumbing have been so well engineered, they too levitate above the Ducati frame.

With everything functioning as it should, it was over to the paint department to complete the look. “To polish everything, we needed to sand down all the imperfections and then buff it to a mirror shine. Painting the polished aluminium was also super hard because the paint didn’t want to stick, so we had to brush all the parts again,” details Nicko, clearly proud of his team. The combination of raw polished alloy, carbon fibre and those brilliantly chosen six shades of blue is truly amazing.

As with every Smoked Garage build, they may look wild but they’re street driven, ridden hard and often raced. To get the handling right, an incredible upper triple tree has been machined that improves stiffness, allows for the fitment of new clip-ons and does away with the factory risers. Out back, the factory Sachs shock has been given the flick in favour of an Ohlins unit with polished linkages and a white painted spring. While the liquid cooled 849cc Ducati L-Twin shows off billet cam wheel covers and spits flames out of the side exit exhaust that neatly pokes out from the bodywork’s right side.

[superquote]“The liquid cooled L-Twin shows off billet cam wheel covers and spits flames out of the side exit exhaust.”[/superquote] The front rim is offset by the exposed rear thanks to the meticulously polished, single-sided swingarm. It perfectly displays the super aggressive, forward-heavy proportions of the entire machine. The lightweight factory alloys needed nothing but a little more of that lolly blue and are wrapped front and rear in Metzeler’s finest. To make it a functional machine, the bike was given a total re-wire with a Motogadget M-unit as the foundation. This allows for only the bare necessities and sends power to the futuristic LED lights front and rear.

Up on the bars, more Motogadget magic was rolled out with the Berlin-based company providing the grips, switches, indicators and a full Motoscope Pro digital dash. “In total, this racer took us nine months from start to finish…” Nicko trails off as if to emphasise just how taxing the entire process was. It was never a build designed to capture the taste buds of traditionalists, but rather as an all-out assault on the senses to show just how far Smoked Garage has come, and also how much more they have yet to do.