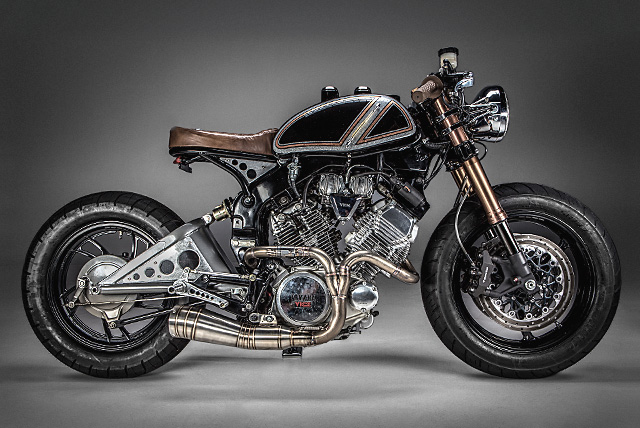 There’s nothing better than getting an open brief from a client – especially when the brief is a challenge to do something different. So when a good customer, Dan Smith, came into MotoRelic with a completely stock ‘83 Virago XV500 and said “what can you do with this?”, Sean from MotoRelic’s mind immediately went into overdrive with the endless possibilities. Obviously the challenge was accepted. “Dan had only a few requests from me,” says Sean. “He wanted me to fabricate a small floating style seat and install the ‘05 GSX-R 1000 front end he scored off of Craigslist. With these two requests taken into account, Sean designed what has been given the name ‘Snubnosed Revolver’ – and never has a name fitted a bike so perfectly. After removing tons of unwanted mass from the bike, Sean got it down to its fighting weight. The slim and trim chassis was now the perfect platform for the build. He then started by adding the GSX-R front end. “The front end went on with ease thanks to the bearing conversion kits from All Balls Racing,” he says. “Once the front was on I measured for the tires. They are obviously oversized to add to the mad max/bulldog look. The only issue I had with clearance was with the coils in their stock location. When I moved the forks to the lowest point of travel the tire would get too close to them. So I moved the coils to the outside of the bracket and that allowed for all the clearance needed.” Now that the bike had the right stance MotoRelic got to work on the requested seat design. “Bending the hoop was tough because it what larger than the dies that I currently have, but with some patience and luck it all lined up well”, he says. Sean shaped the seat from re-bonded foam and once he was happy with the shape he sent it off to Wes at Counter Balance Cycles. Wes sewed up the beautiful distressed leather seat that compliments the overall colors of the bike. The seat pan also hides the Shoria 210cca battery and the fuse block. Then they moved onto the tank. The Virago is known for having a very hard to deal with frame design when it comes to using a different tank. “I love making stuff work where it normally wouldn’t” says Sean. “So I chose a CL350 tank for this. It just had the stubby look and shape I needed. With this model Virago, the air filter is mounted in the top of the frame under the stock gas tank. After cutting the CL tank in half and mocking it up to the frame, I saw an opportunity to go a little crazy.” And so, in a moment of genius, Sean decided to have the Velocity stacks run through the tank to the air filter. Adding 2 inches to the width of the tank made it possible to add tubes through the tank straight down to the air filter. Topped of with polished aluminum tips.

[superquote]“So, in a moment of genius, Sean decided to have the Velocity stacks run through the tank to the air filter.”[/superquote] MotoRelic added a rain guard to the now perforated air box lid to keep the elements out of the filter. The gas cap is an aircraft style that works well. Craig from Homeward Bound Motorcycles worked his paint magic on this tank. Tons of flake was added to the silver and the copper leaf sheeting is just icing on the cake to pull all of the colors together. There was around 10 coats of clear to achieve the silky smooth finish. The stock Virago swingarm is normally a thin and weak looking piece. So Sean made it look tougher by filling in the space between the upper and lower arms. This also strengthened the arm tremendously and allowed him to add the aluminum trim to match the seat and the Joker Machine rear sets. After the swingarm was filled in, Sean had to figure out where the exhaust was going to go. “I enlarged the hole in the frame and that allowed the rear pipe to curve around right where I needed it. With a box of stainless bends I got to work on the headers. Snaking them around to the side, I was able to keep the pipe the same length and have it nice and tight against the engine. The muffler is an ebay item that Dan. We both thought it would work perfectly so he hit the “buy it now” button. When it arrived we were not disappointed. The sound from it makes you question if this little bike is indeed a 500.” The gauge cluster is an Acewell – an item that give you all the info you need. The headlight is actually the stock unit held up by Speedmotoco brackets. Biltwell offered grips that matched the seat perfectly. As you throw your leg over the bike and grab the bars you instantly feel the compact shape and feather light weight of the bike. Finally, and most importantly, we asked Sean from MotoRelic how the bike rides: “You can’t help but smile. As you set off into the twisties you realize the large tires are not an issue as the bikes steering is very light and quick. Approaching the first corner you squeeze on the front brakes, finding out that a little pressure goes a long way with the huge GSXR calipers. Roaring down the road you can almost feel that the bike is happy in its new skin. It was a joy to build and an absolute blast to ride.”