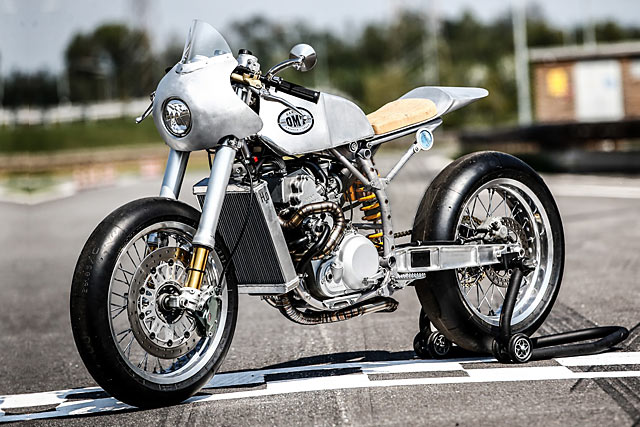 The Northern Italians are nothing if not industrious. With a veritable army of famous brands to their name, there’s nary a person on the planet that wouldn’t have heard of them. But while names life Ferrari and Ducati steal the limelight, there’s also plenty of smaller companies that you may not have heard of. One such operation is Milan’s Vertemati. Started in 1993 by brothers Alvaro and Guido, they quickly gained mythical status in Motocross circles. OMT’s Marco Troiano, who raced the bikes in the ‘99 Italian Supermoto Championships, decided to pay tribute to the brand with a Vertemati custom bike he calls ‘Super Light’. OMT Garage is located in a large slick showroom, garage and cafe set-up in the suburbs a few kilometres north-west of Central Milan. Selling new, used and custom bikes along with gear and spares, the space has apparently become quite the congregation point for Milan’s more moto-minded. If you’re ever in the area, chances are Marco and brother Mario will be more than happy to talk torque over a cup of fresh espresso.

Clearly Marco’s relationship with the Vertemati brand is a whole lot more than skin-deep. “I have fond memories of competing for the Vertemati brand in the late 90’s. I still have a whole collection of their bikes and engines, and I wanted to build my own special one. It would include the 100% made in Italy engine and the rest of the work and equipment would be all-Italian, too.” Of course. The bike has been a feature on the Italian custom bike scene for a good while now, but it was largely rebuilt in 2017. “The original bike was a Vertemati 530 Supermoto, a bike that I competed on in the 90s.”

Modifications to the frame have rendered it stronger and lighter than the factory original. The front suspension was lower around 7cm and with the addition of a new and larger top triple clamp, the bike’s front end now matches the new frame for strength. And while Marco has tried to stay true to the Italian Tricolore, the rear suspension was made by some Swedish blow-ins called Ohlins. The rear swinger was CNC’d from a fresh piece of aluminium, and then shod with 17″ aluminium tubeless wheels, front and rear.

But the handmade festival doesn’t stop there. The gas tank is a bespoke aluminium unit made in-house and designed to hold around 6 litres of fuel. Similarly, the fairing and tail section are all scratch-built, the latter containing a slickly-integrated stop light. All this metal-y goodness was then contrasted with a cork seat. Note to self; cork seats look molto cool. Following suit with the rest of the bike, the power plant in this one is a special unit with a full 570cc displacement. As with all Vertemati bikes, they are very well put together but require an owner that isn’t afraid to make what he can’t buy. Especially in 2017. And as it just so happens, Marco is just that kind of guy. Proving the point, he’s also made up the masterfully welded stainless exhaust you can see on the bike. It snakes its way down under the engine, where the fumes are expelled from a unique and very beautiful box muffler.

The addition of a new Keihin FCR-41 carb, along with many and various undisclosed engine mods, now give the Vertemati a very healthy 68hp of grunt. Coming from a 92kg racer, that’s a damn healthy power-to-weight ratio. When asked what it’s like to ride, Marco reports that it’s, “Wonderfully lightweight and very handy.” And the hardest part? “This would have to be the chassis and swingarm,” says Marco. “They were both made by hand and for all the reasons you can imagine, everything was checked, rechecked and then checked again.” A task like that could be tedious. Then you remember the racer you’re fawning over is one of the most beautiful pieces of engineering we’ve seen in a long time, and suddenly things don’t seem so bad after all.