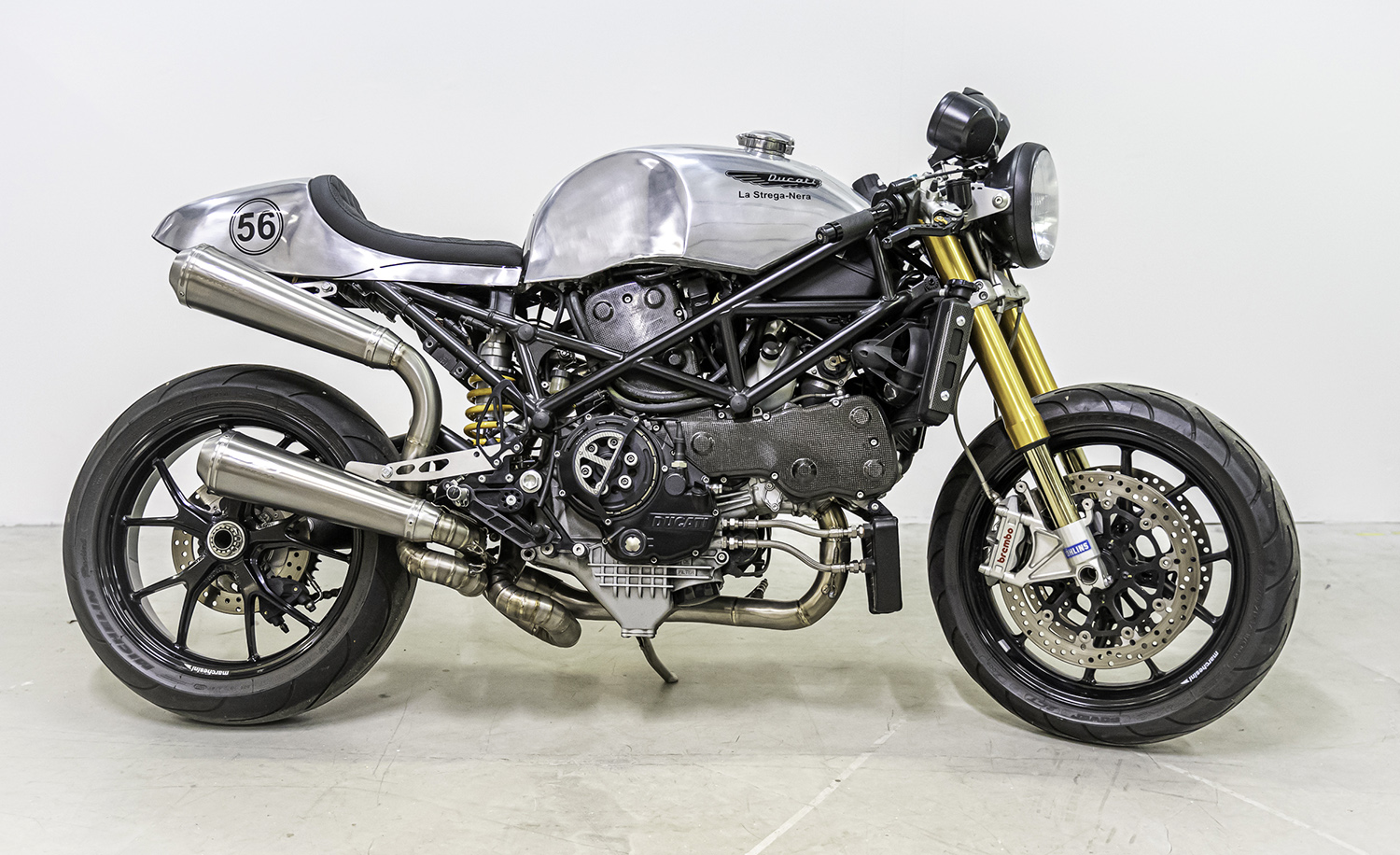 Assembled in a garage are five Italian motorcycle fanatics with a diverse range of artistic and mechanical skills. They’re wearing black t-shirts and jeans, been handed the keys to a motorcycle and left to their own devices. You wouldn’t expect a result any different or any less brilliant than the stunning Ducati Monster S4RS café racer that sits before you. Based in Turin, the team at Metalbike Garage are more than just a business, they’re a team, and their single focus is to build incredible custom motorcycles fuelled by an unbridled passion for two-wheels. So, they took one of the Bologna factory’s best creations and turned her into a creature they call ‘The Black Witch’.

One of the fab five is Giuseppe Rizzo and having fielded a call from a client tells us how they happened upon the drool-worthy Duc, “The bike is owned by a Swiss customer of ours. The bike was delivered to us immaculate as if it had just come out of the dealership.” That’s right, someone owned a mint condition Ducati Monster S4RS, the one with all the World Superbike fruit from the three-time championship-winning 999, and was happy to have it torn apart. We’re in!

After admiring the bike for a while, the crew got down to business and the first task was to have Federico the designer drew up what he envisioned and print it out so that everybody was on the same page. The idea was to combine all the best elements of the existing bikes mechanical package, with the raw looks of the ’60s era cafe racers and customs. So with tools in hand, the bike was attacked removing all of the factory plastics, the tank cover, seat and just about every component that gave the motorcycle a modern appearance.

“One of the biggest difficulties faced was hiding the wiring of the electrical system and the battery,” Giuseppe explains. A modern machine with a high-end fuel-injected engine has a large loom, ECU and plenty of components to deal with and the decision was made to centralise every last piece of it and hide it all under the tank. With this done and all the checks made to ensure the bike still operated as it should, the visual transformation could begin. Which started by attacking the expensive trellis frame with a grinder and shortening the rear end.

Then it was time for the laborious task of hammering, rolling, shaping and welding the handmade tank and tailpiece. The large airbox underneath and the perimeter nature of the frame make it even more of a challenge, but the hand-finished pieces come out looking a treat and transform the Ducati back in time with a Norton’esque look from the ’60s. A Monza cap and leather tank strap are the perfect additions to keep the theme flowing. With the smooth hand-polished rear receiving a diamond stitched Ad Hoc seat for the pilot.

Subtle black graphics have been added to contrast with the raw alloy and join a host of factory black carbon fibre pieces to keep the colour scheme simple and stylish. With all the plastics removed the single headlight held tight to the forks looks right at home and the round Magneti Marelli clocks provide exceptional functionality without requiring a change to anything older. With flat bars fitted from the factory, the risers are blanked off and a set of clip-ons take over the controls; you couldn’t have anything else on a cafe bike.

Suspended from the trellis frame is the famous Testastretta engine from the 999 that won world titles in ’03, ’04 and ’06 with three different riders. To fit under the smaller Monster tank the throttle bodies are 4mm smaller and rob the engine of a few HP. So, to get them back and some more, the boys opted to go top shelf on the exhaust with a full titanium system that snakes rearward beautifully before the aural symphony of the thumping L-Twin is unleashed out of stunning reverse cone mufflers.

The rest of the supporting cast is as good as it gets, the aluminium single-sided swingarm is controlled by an Ohlins shock. While a full set of 43mm Ohlins forks takes care of business up front with radially mounted Brembo brakes taking care of stopping. The gorgeous lightweight Marchesini wheels are wrapped up in Michelin tyres and finishing the build off is a half cover for the exposed dry clutch. Because what says Black Witch more than a bike that can chew your hand off while it’s standing still and packs 145hp, sub-175kg weight and timeless good looks; it’s simply the Metalbike Garage way.