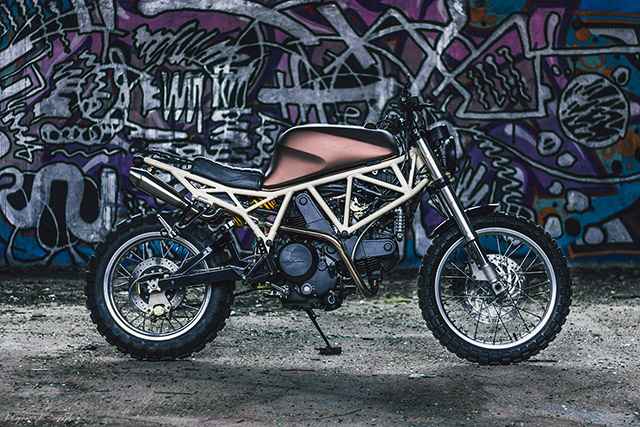 Though the Monster is a fairly close second, the 750/900 SS platform has become Ducati’s most commonly customized model in recent years. While its bodywork is admittedly on the dated side, once stripped from the SS, what you’re left with is a strapping L-Twin engine, the Bologna firm’s signature tubular trellis frame, and, with a little creativity; gobs of potential for customization. 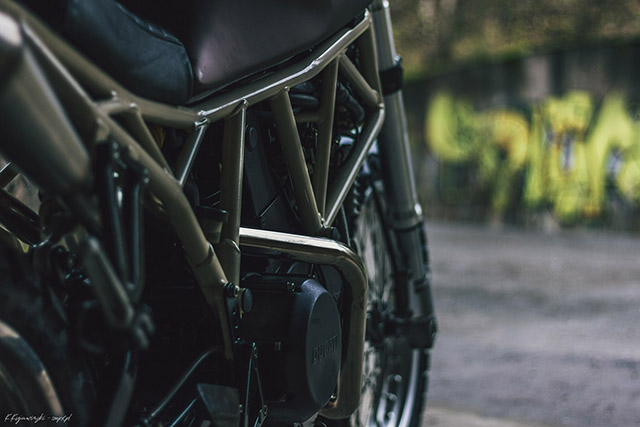 Northern Poland’s Adrian Lilla, the force behind bespoke bike outfit, LL Motorcycles has only been running the shop for the last three-or-so-years, though in that short time, he’d developed a distinct desire to scramble the classic three-quarter-liter Duck. So, when a potential customer came knocking, inquiring about having a 750SS given the LL scrambler treatment, Adrian knew it was one project that was simply meant to be.

“I’d purchased a nice fuel-injected 750SS donor a while back and then spent a few months riding it in order to hone in on what needed to be changed for a scrambler build. So, by the time the client commissioned the project I was able to hit the ground running,” Adrian tells us. 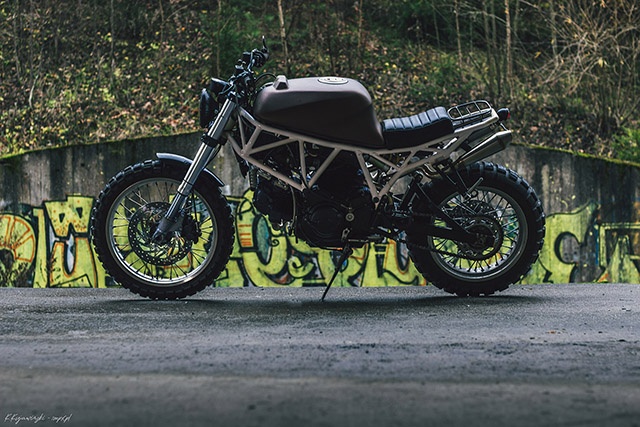 The SS was brought up on the bench where Adrian proceeded to pull the entire thing apart. He knew right out of the gate that the stock seat and subframe simply weren’t going to be up to snuff for what he and the customer had in mind, so a new structure was designed and fabricated with a shorter hoop being grafted into place. Sitting a couple of inches lower than the stock unit is a custom flat, square saddle with ribbed stitching that now runs halfway back up the new subframe, with the remainder of the bespoke framework occupied by a custom luggage rack. 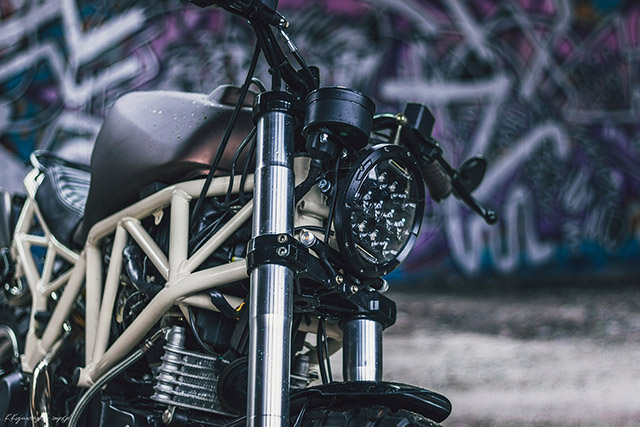 Adrian also opted to leave the pillion pegs on the bike. While it’s primarily a monoposto mount, there’s a passenger seat that can be tacked onto the rear rack for proper two-up travel. The mounts from the passenger pegs also provide a little additional security for the build’s full custom exhaust system; a pair of stainless steel headers that follow the lines of the stock items before continuing up, under the seat and then finally terminating in a pair of under-seat-mounted reverse cone mufflers. 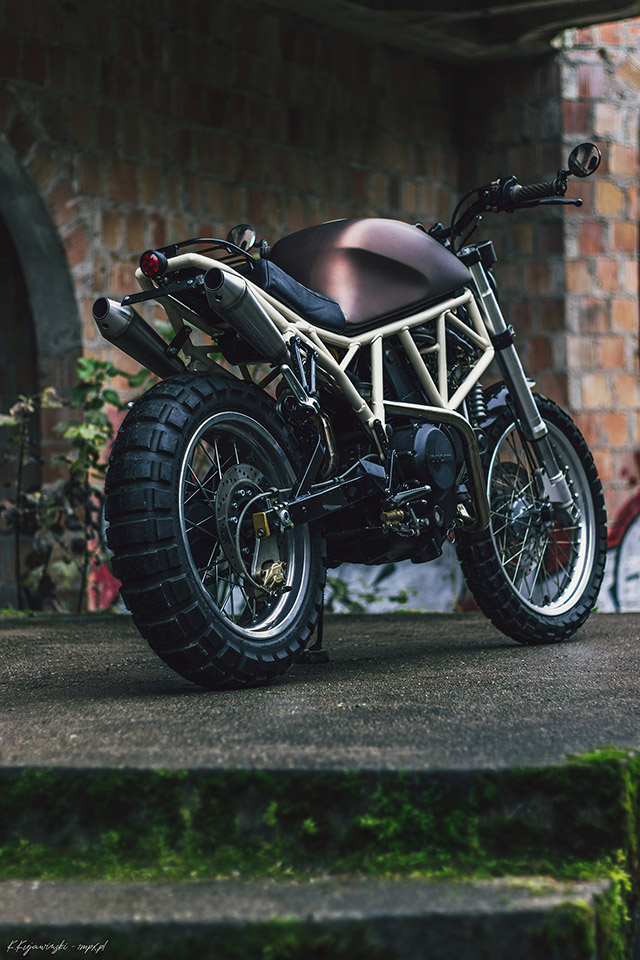 “The new system absolutely screams, though you can also use some dB killers I made for it so your neighbors can still like you,” Adrian half-jokes. “I raised the front end just slightly for better clearance, too.”

On top of the lowered seat, LL also laced the Duck up with a higher set of upswept bars, more conducive to off-roading and commuting duties alike. Like the saddle, the foot controls — which are aftermarket units, painted and suspended via custom bracketry — also sit noticeably lower than the original pieces. 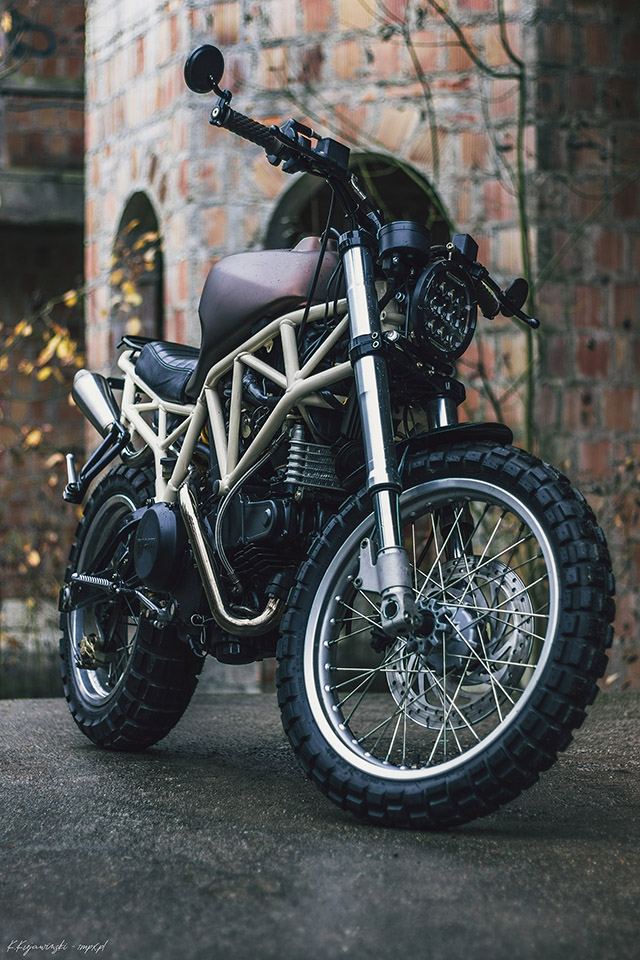 Adrian also knew if the SS were to have genuine dirt-going prowess, the factory wheels would need replacing. So, the stocker’s hoops went in the bin, and in their place, Adrian sourced a new set of spoked wheels — a wide 17” rear, and a 19” item out front.

Wanting to offer the benefits of contemporary lighting while simultaneously retaining a classic, round-headlight-scrambler aesthetic, Adrian decided to chuck out the stock lighting, and replaced it with modern pieces that maintain the profile of old-school items; a shallow, circular 10-LED headlight and a small, red, round taillight lit via LEDs. There’re also micro LED indicators front and aft, and a small electronics tray now hides beneath the new saddle and subframe, housing the battery, lion’s share of the electronics, and keeping the area inside the chassis relatively clutter-free. 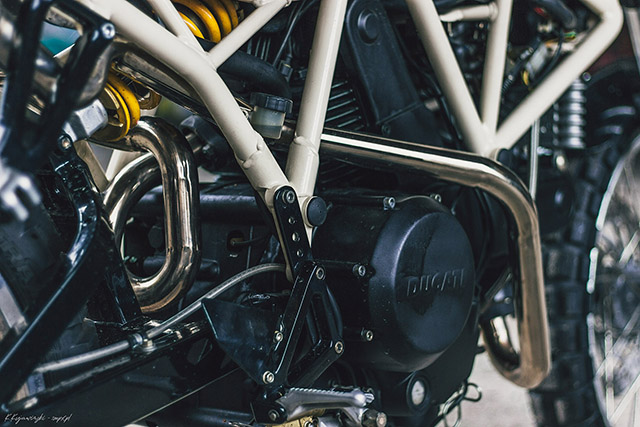 While it may look like the stock cell, the tank is actually off of one of the carb’d SS models, though it still fits the frame flawlessly. After getting everything linked up, Adrian pulled the tank off the bike to have it prepped and painted, opting to go with a rich, matte brown hue that changes dramatically depending on lighting conditions. A custom front fender was also fabbed up and then fixed just above the 19-inch front. 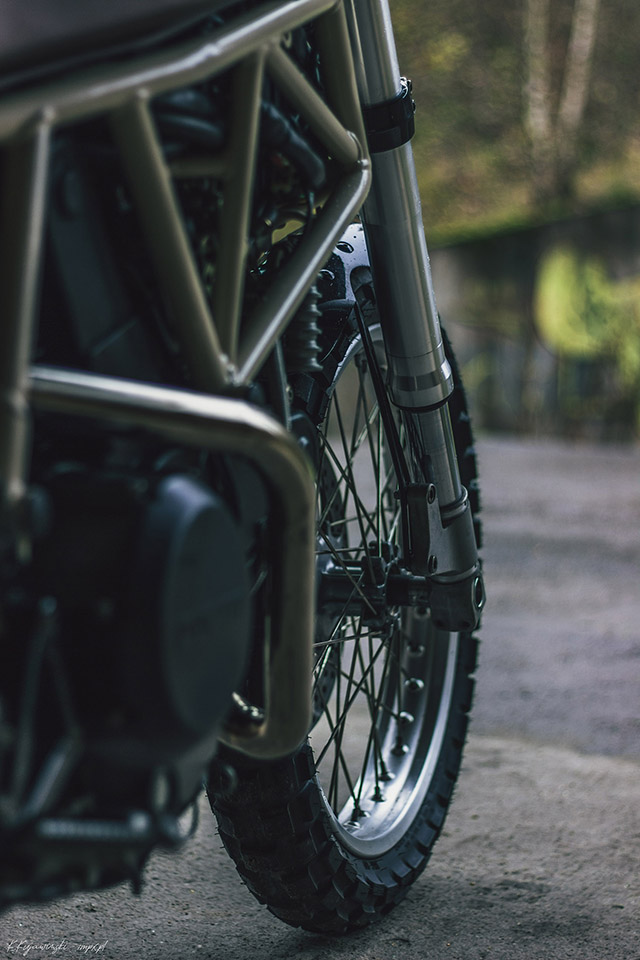 The main chassis and subframe were also powder-coated in ecru, while the swing-arm, fender, luggage rack, passenger peg mounts, rear-sets and hangers, and timing belt covers were all treated to a coat of black as well. The polished stainless exhaust, paired with the USD forks, brakes, and wheels, all add a dash of silver to the mix to liven things up, as well. Other finishing touches include an aftermarket gas-cap, new grips, bar-end mirrors, and of course, the obligatory set of knobby, off-road tires. 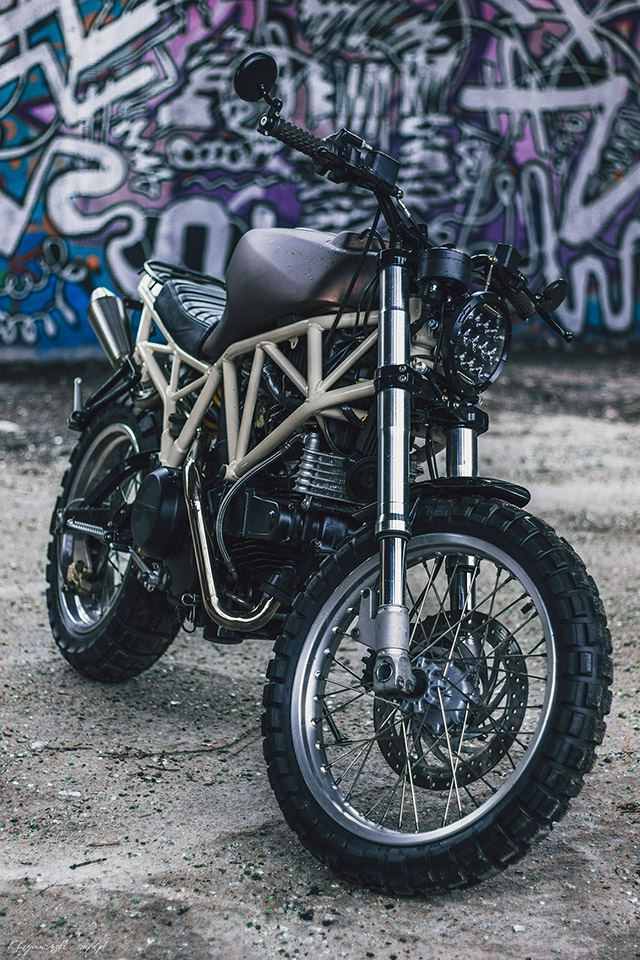 Adrian says the end result is an absolute pleasure to pilot, having lost a considerable amount of weight over the course of the build. “It really is fun to ride, super light on its feet, and a total blast on city streets and gravel roads,” relays a proud Adrian.

This stellar 750 SS appears to be one of those cases where the most challenging aspect of the project for the builder, is just having to hand the completed work over to the client. 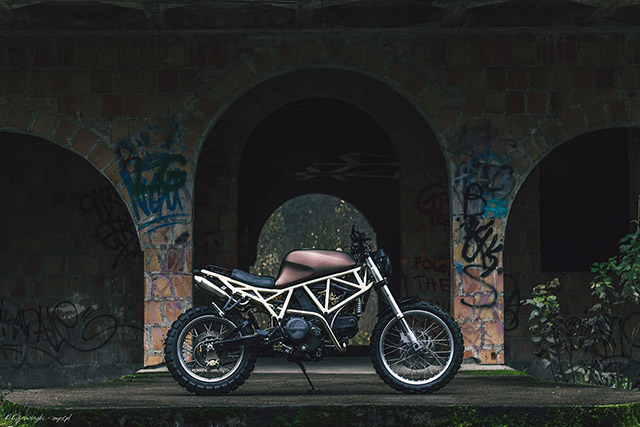