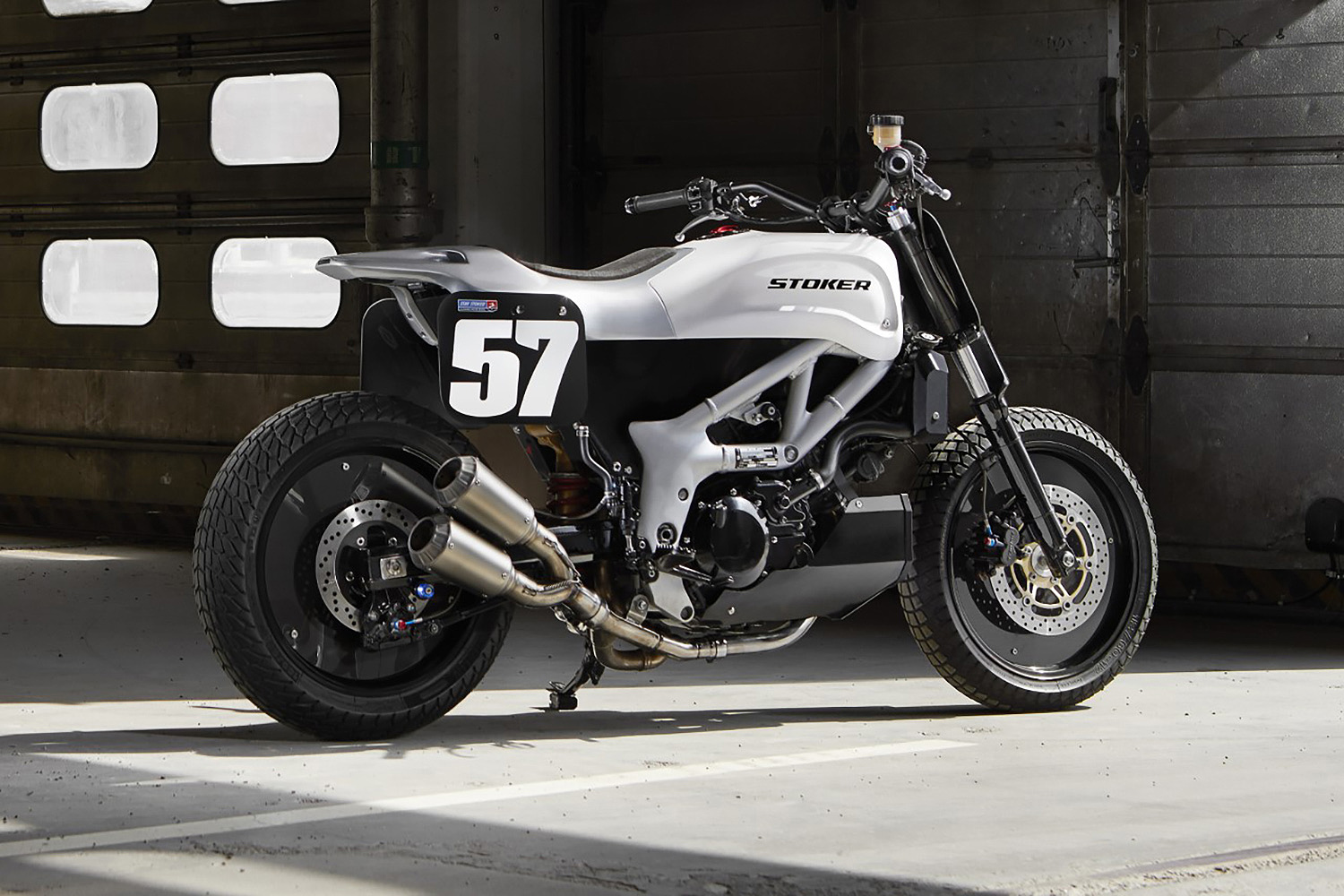 Since two-wheeled machines had engines slapped inside their frame, some of the most humble bikes have been built into the most incredible custom creations. Take the humble Suzuki SV650, it might have taught thousands how to ride as a no-nonsense learner legal motorcycle, but it has also be turned into crazy street fighters, cool cafes and thundered around the Mountain Course at the Isle of Man TT. A big fan of the bike, Finland’s Antti Eloheimo got to thinking, he had never seen one built into a really good street tracker. So, he stepped inside his Stoker Motorcycles workshop and came out with the best Suzuki SV650 we’ve ever seen, which also takes a hell of a swing at the top tier street trackers too.

“I’ve always liked the beefy trellis frame but haven’t seen well-executed street trackers from this very popular bike that people have modified to all kind of uses from road racing to dirt – due to its great engine and handling. I build this for myself as a daily ride, to slide around here and there,” Antti tells us. So, starting with a first-generation, 2000 model, he got straight down to business pulling the bike apart and ditching a whole bunch of parts that he knew he wouldn’t need. Not only did he have firm ideas on where he was heading with the looks of the bike, it had to be lighter, even with all the new additions.

“The hardest thing in the design was to get the curve from the top of the tank to the tail to be as shallow as possible without raising the seat height too much,” he explains about planning out that incredible one-piece body. To begin with, the stock tank had to be modified so it would fit, cut and shaped so it’s both lower in overall height and narrower in its widest section. The body itself is made from an epoxy composite with stunning lines, the curves that flow rearward neatly offset by the flat bottom that runs parallel to the ground.

But it’s not just about form, the function built-in is brilliant too with 3D printed vents in the front guiding cool air to feed the engine. At the rear, ducts allow for the heat from the rear cylinder to escape, a common issue not considered on V-Twin engines but one that Antti was all over. The clean look continues with aluminium side covers that cross the gap between body and frame and wrap around the previously exposed rear. “I also wanted to have everything fully street legal so even the incline of the registration plate is carefully designed under the tail.” another slice of genius, with the belly pan also blacked out aluminium with a 3D printed grille.

A pair of number boards helps continue the tracker vibe, with a third made for the front that features an offset LED light to shine the path forward. Then it was time to pull out the paint gun and lay down the gloss white and black colour scheme that is contrasted with the slick silver at the rear. The graphics were laid over the top and the seat attached. “The saddle looks hard but is quite comfortable to sit on,” Antti smiles. Now he could get into the functionality of the machine and with 17in wheels to work with, instead of more traditional tracker 19s, he made a set of covers to give them more meat.

These are then wrapped up in Michelin Supermoto Rain tyres that offer incredible levels of grip, even on the slippery Finnish roads. The entire bike is dropped around 5cm front and rear and that starts with the stock forks that have been pulled down and rebuilt with new internals and a set of preload adjusters. With the popularity of the SV, rear shock swaps are a well-known path and one of the best conversions is to slot in an adjustable shock from a Kawasaki ZX10R, which is exactly what has been done. Then to give the brakes some more bite a set of braided lines are fitted, and fork protectors finish out the task.

The engine hasn’t been forgotten either, the humble 645cc, DOHC, V-Twin with liquid cooling is a solid performer that can rev surprisingly hard. It now pulls air via a modified box, while the front radiator covers have been replaced with 3D printed items, that along with the rest of the engine has been all blacked out. But really bringing things to life is the custom 2 into 1 exhaust system that merges into a link pipe before screaming out of twin GP style mufflers. To make the most of the power, Antti shortened up the gearing to pull the now 160kg machine and then made his own quick action throttle that sits inside the stock surround.

All of which is perched on the new Neken flat-track bars that sweep back closer to the rider thanks to pull back risers. On the end of those bars is a set of Motogadget turn signals and the same company also supplied the speedo. Mounted on the sideboards and almost impossible to see until they’re illuminated are the rear indicators, while the smallest road-legal taillight was chosen for the job. Then to finish out the build, a set of custom pegs and carbon fibre heel guards were fitted and the once humble SV650 has been totally transformed. It is an incredible build from top to bottom, but perhaps most impressively is that this is Antti’s daily ride for when he’s not snowboarding, mountain biking or travelling to surf, no wonder he called his business Stoker.