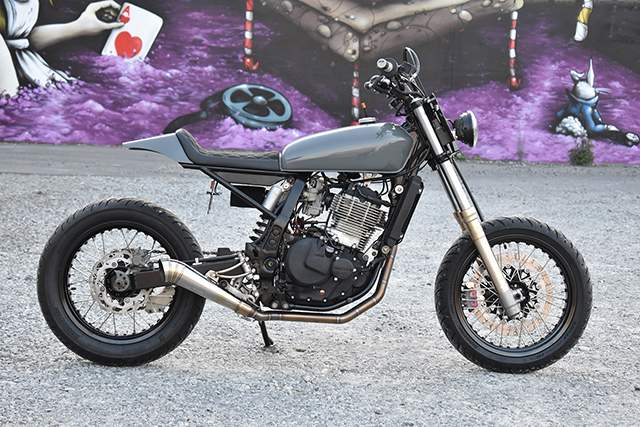 Just after midday on the 22nd of February, the streets of Christchurch New Zealand started shaking violently. This wasn’t the first time they had experience an earthquake – the city is built on a seismic fault line. Not only did the quake kill 185 people but it also left the roads in a terrible way. So when Christchurch local, Chris Penniall from Seven Motorcycles was looking for a new project, he opted for a street tracker style bike that would be able to handle the odd pothole in style. Last year, when he noticed a really cheap Suzuki DR650 come up for sale he thought it would be the perfect post-earthquake donor bike. 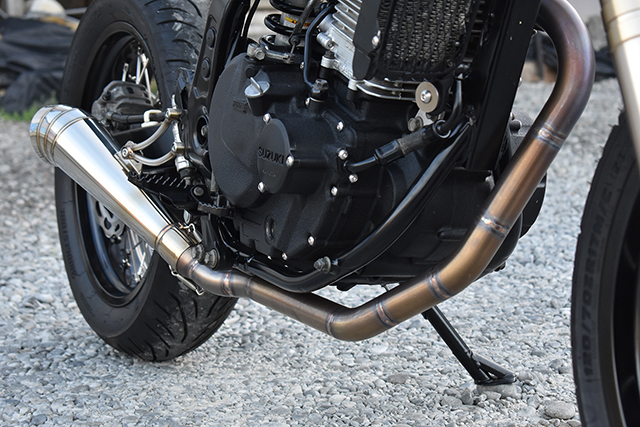 It turned out there was a reason the DR650 was cheap – it was in terrible condition and had been butchered to an inch of its life. “Someone had cut the back of the subframe off behind the seat and stripped the tank to bare metal and painted the wheels black,” Chris tells us. “It was like they were trying to build a post-apocalyptic Classified Moto style bike but with about 5% of the finesse. It didn’t bother me as those bits were all going to get binned or modified anyway.” 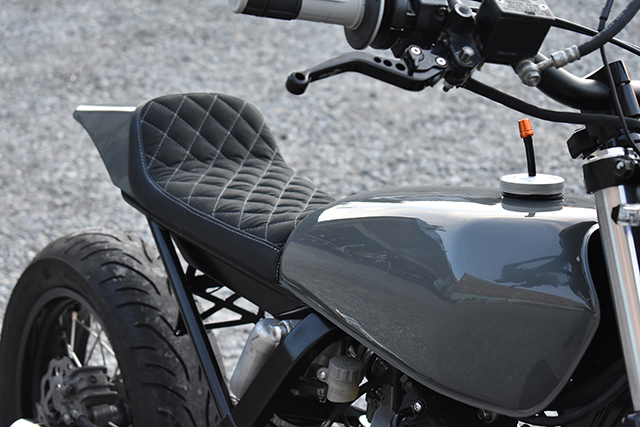 For the first time, Chris started the build by drawing a design in CAD. “It really helped to visualise the proportions first time,” he tells us. “Then the tail section, front number plate, licence plate mount, seat pan and electrical tray were laser cut in aluminium from the drawings. Every bracket or mount I could, I also had laser cut to keep the accuracy up and the time spent fabricating down.” 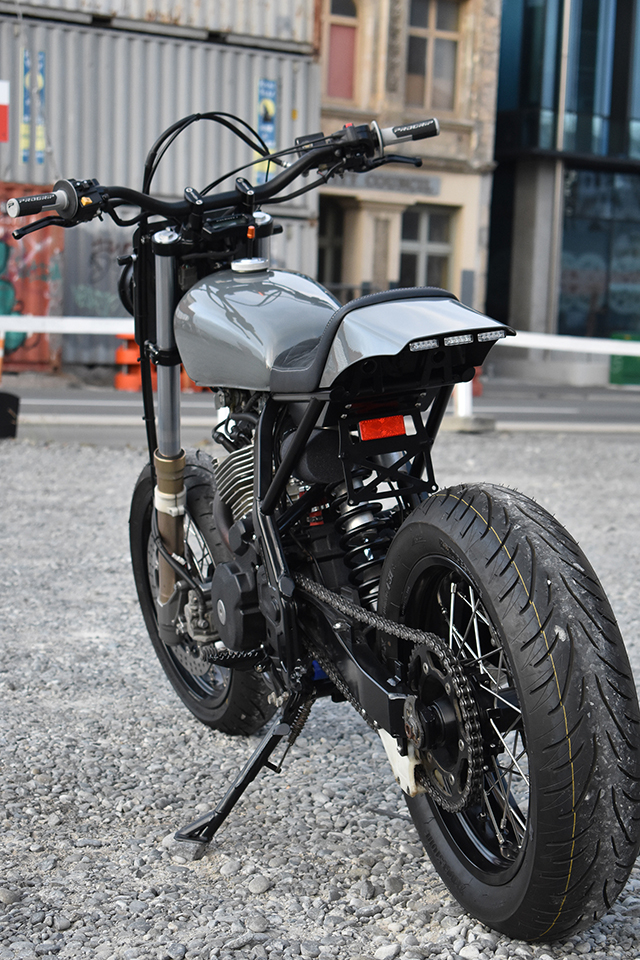 Like many builds, the biggest job Chris encountered while building the DR was the wiring. “Almost every wire needed to be shortened or lengthened or re-purposed. Fitting everything in the electrical tray under the seat was like trying to pack 10 pounds of crap in a 5 pound bag” he recalls. The bike is now running an Antigravity lithium ion battery and the key ignition is no more, replaced with a hidden RFID sensor under the tank. 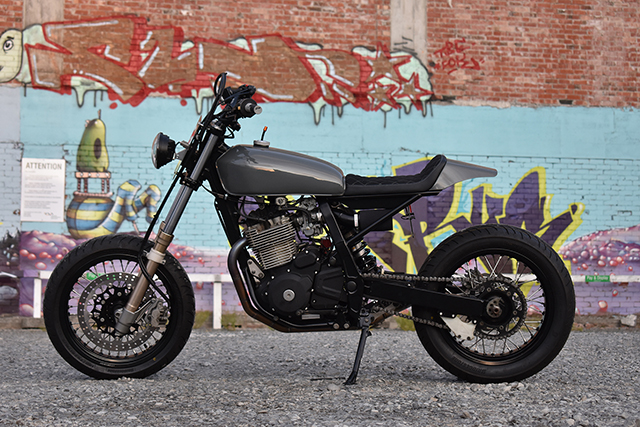 A small Trail Tech Endurance II takes care of speed indication, mounted on a laser cut bracket along with small LEDs for full beam, neutral and indicators. Also tucked in behind the front number plate is a box where all the up front electricity happens. Everything that wasn’t a necessary factory plug has been converted to Deutsch style connectors. The headlight mount and plug has been designed to be removed in a minute “in case you wanted to enter race mode – which is also offset to the side to allow space for a race number. “I was going to put numbers and decals on the bike but once it was all together it looked so clean I decided not to.” 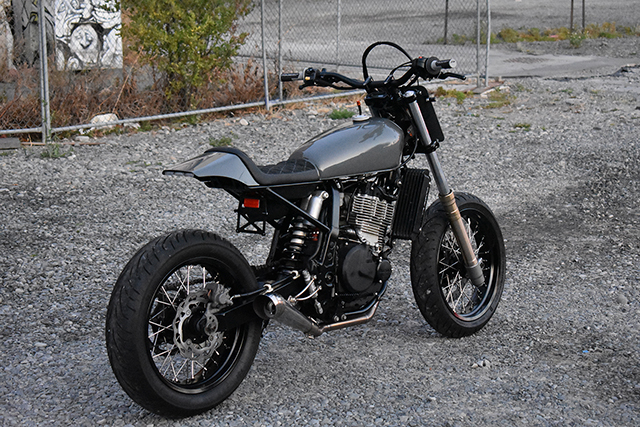 In the engine department the bike is running a Unifilter foam pod filter and a TM40 flat slide pumper carb. “One of my favourite parts of the build is the exhaust.  That is where working on a big single is a pleasure compared to multi cylinders with the ever decreasing degrees of freedom as you try and merge several pipes together. 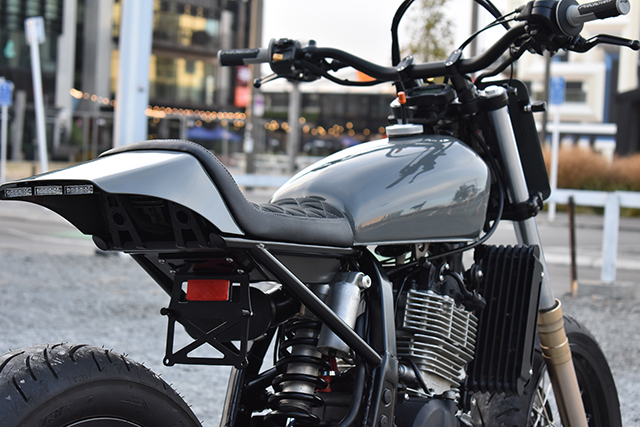 As for the suspension, Chris left them basically stock except for performing the factory lowering option of 40mm. That in combination with the motard wheels lowered the bike to a point he was happy with.  For the shoes on the motard wheels, Chris choose some sensible Bridgestone T31s for decent longevity. 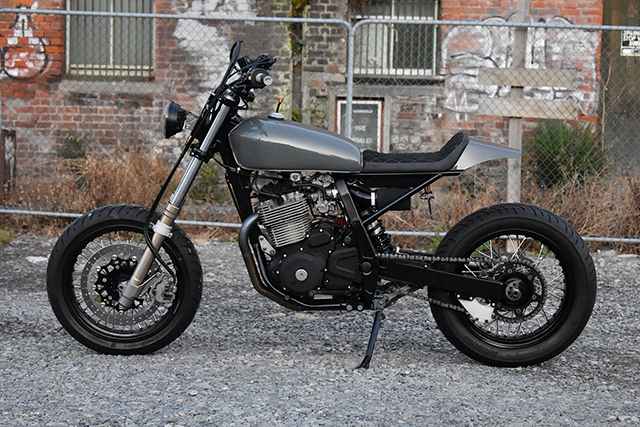 To finish the bike off, Chris wanted a subtle urban assault vehicle vibe. Therefore the frame and swingarm was powdercoated in satin black and the engine in black wrinkle paint. The beautiful slender Honda CG125 tank and other bodywork was painted in Destroyer Grey – used on Chargers and Challengers. 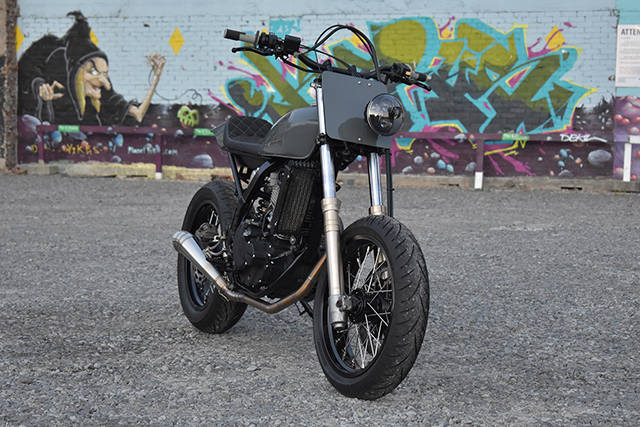 In the end, the build took Chris almost a year to complete, while juggling a full time job as a Chemical Engineer and a wife and two kids. Even though the roads across Christchurch have mostly been repaired, this DR650 tracker can now be found tearing up the streets and turning many heads along the way. 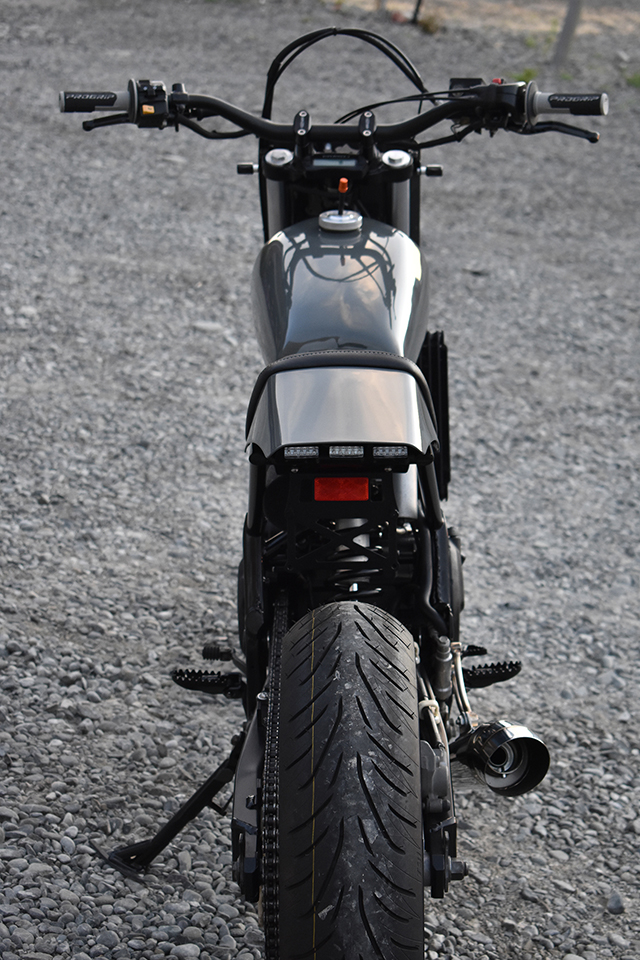 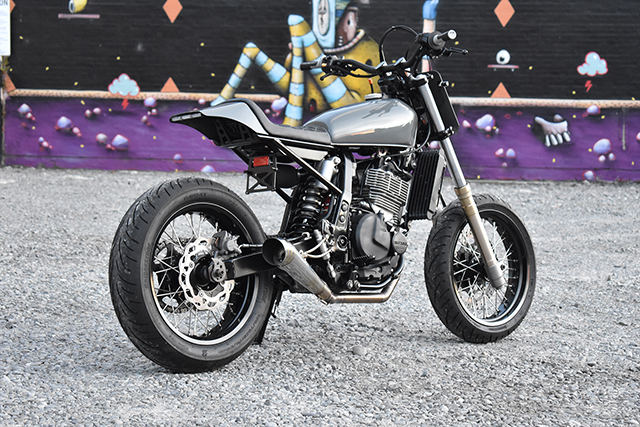