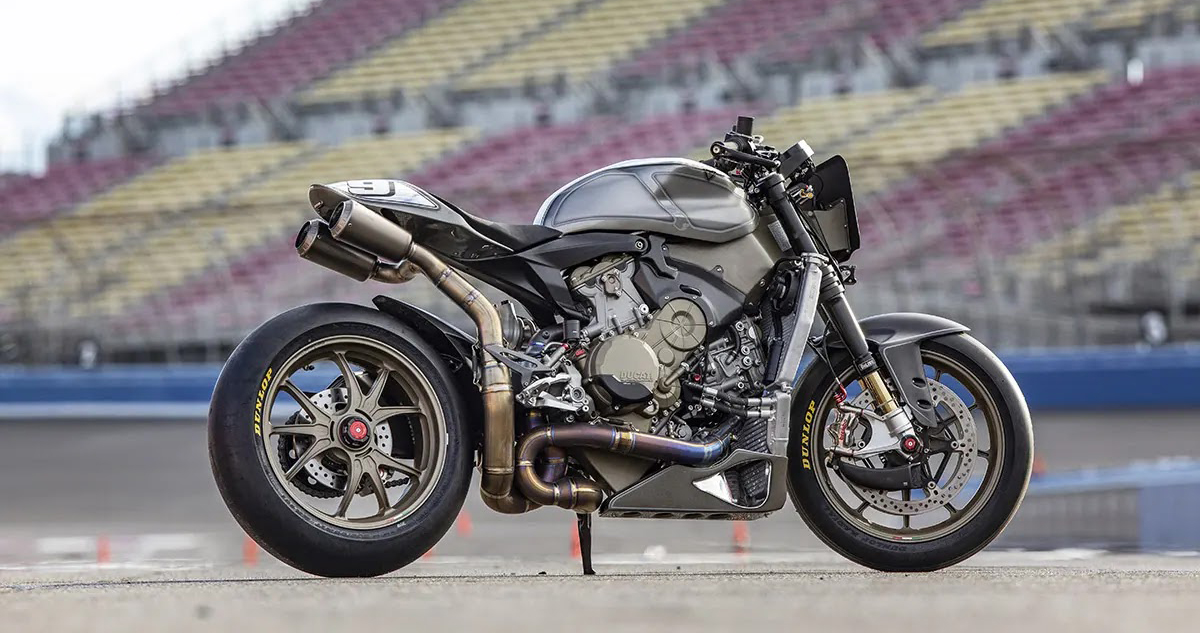 When Ducati first released the 1199 Superleggera in 2014, it was unlike anything else that had ever come before it. Based on the Italian manufacturer’s already impressive Panigale R, the Superleggera featured a magnesium monocoque frame (and wheels), carbon subframe, and a further massaged, higher-revving, 200hp version of the homologation special’s decidedly-potent 1,198cc L-Twin — all cloaked in carbon fiber Panigale bodywork.

With a $65,000 sticker price and a total production output of only 500 units worldwide, calling the 1199 SL “exclusive” would be a serious understatement, yet despite its elite pedigree and the immense rarity of the model, the 342lb superbike has become the latest machine to go under the grinder at Southern California workshop of Roland Sands Design.

Christened, “The Super,” the goal of the hugely ambitious build was to marry modern cutting-edge superbike performance with the aesthetics of competition machines from half-a-century-ago, back when racers piloted their bikes well into the triple digits without the protection of a full fairing and windscreen (or the benefit of modern electronic rider aids). Furthermore, Sands aimed to strip back the bike in order to uncover and highlight the feat of technology and engineering that is the Superleggera’s Superquadro engine.

The Superleggera’s full-fairing and waspish tail section were binned in order to create a blank canvas that Sands used to bring his 1970s and ‘80s racebike-inspired vision to life. Made from hand-worked aluminum, the build’s new tail maintains the general sleek, round shape of traditional cafe tails, though boasts a more streamlined, modern, lower-profile silhouette, finished off with a tiny lip/rear spoiler at the very back. Sands also managed to build the new tail section atop the Superleggera’s stock carbon fiber subframe, allowing the bespoke elements to seamlessly flow into the factory-finished parts of the motorcycle.

Rather than building a bespoke tank from scratch, the Socal shop instead opted to rework the existing cell — the aluminum race tank also found on the R-spec models — shaving it down and completely altering the bottom of the vessel and giving the front a smooth-rounded edge that sits cleanly on the bike’s trick magnesium frame.

The front fairing’s been replaced by a 1980s AMA Superbike-style square number plate — also made from carbon fiber — with rounded edges and a central opening that funnels air into a custom intake. The final piece of bodywork is the belly-pan: a brawny and aggressive-looking item with a flat, hole-punched bottom and a pronounced NACA duct that wonderfully caps off the bottom of the build, cleaning up the silhouette and further framing the crown jewel of the build: its tire-shredding 200hp L-Twin.

The running gear on The Super is untouched, which is frankly unsurprising considering the 1199 Superleggera left the factory with some of the finest components that money can buy: Öhlins FL916 forks with CNC’d billet aluminum lowers, the Swedish outfit’s TTX36 mono-shock, and Brembo’s billet M50 Monoblocs which are paired with a race-spec MCS 19-21 master cylinder and kept at ideal temp via a set of CNC Racing’s carbon fiber brake cooling ducts.

With the engine already thoroughly hot-rodded at the factory in Bologna in the form of titanium con-rods, titanium intake and exhaust valves, two-ring race pistons, and a precision, tungsten-counterbalanced crankshaft, amongst a slew of other internal tweaks, Sands’ Southern California team opted to leave the 200hp and 99ft-lbs of torque (186hp and 90ft-lbs at the wheel) power plant largely unchanged.

The L-Twin does, however, now benefit from a massive Febur factory race-spec radiator and matching oil-cooler, ensuring proper cooling even on the hottest of laps. The 1199 SL’s titanium Akrapovic exhaust has been extensively modified, as well, transforming the system into a dual-pipe under-tail, WSBK-style setup, similar to the cans found on the Final Edition Panigale or the later 1299 Superleggera, albeit mounted higher up, hugging the bottom of the build’s aluminum tail section.

One hugely difficult aspect of the build that Sands anticipated going into the project, was how the team would go about cleaning up the bevy of unsightly wires and sensors involved with the SL’s cutting edge suite of electronic rider aids (wheelie control, engine braking control, traction control, ABS, etc) — fairly crucial pieces of equipment considering the donor’s off-the-charts power. Sands’ wanting to leave the engine on full-display, also meant finding some clever solutions in this realm.

The modified R-spec tank manages to accommodate a portion of the build’s electronics and wiring, while its new front intake now discreetly houses the Duc’s gyroscope sensor and GPS module. The belly-pan also hides a Lithium-ion battery, rectifier, and a few other miscellaneous bits.

Despite the Superleggera’s track-ready setup, the RSD gang has largely revised the cockpit, with the machine now helmed via single-piece carbon high bars set in custom risers atop a custom top triple. The TFT display also sports all carbon housing, and the original fluid canisters have been jettisoned in favor of carbon fiber reservoirs from CNC Racing. The custom carbon bars are also fitted with top-shelf machined billet GP-style switch-gear, and a set of folding Brembo levers, peculiarly fortified behind a pair of what appear to be Indian Motorcycle-branded lever guards (from what we imagine may be leftover from one of Sands’ many Super Hooligan endeavors).

The original aluminum pieces nestled in-between the Superquadro engine and its sand-cast magnesium frame have also been replaced with custom carbon parts, and the heel guards, kick-stand, front and rear fenders, swing-arm cover, front sprocket cover. rear brake reservoir and the cover of the SL’s titanium Ohlins mono-shock spring are all made from the lightweight weave as well. There are also additional machined billet items from CNC Racing such as the super-light Panigale’s engine covers, quick-release gas cap, and front and aft axle sliders. Headlight duties now go to a four-LED light-bar that hangs in a custom bracket from the bottom triple, while the tail/brake-light consists of a race-style mini-LED strip in the back of the new tail.

With everything else squared away, The Super was wheeled off to Santa Barbara’s AIRTRIX, where it was treated to a bespoke chrome, candy grey, and bone white livery with hand-laid pinstriping throughout and race numbers on the front plate and tail — aiming to blend traditional race livery styles with that of classic American hot rod and chopper aesthetics.

Considering the Superleggera was tipping the scales at 390lbs fully wet with its tank topped off, we’re confident in saying the shedding of the full set of bodywork and the plethora of aluminum bits being swapped out for carbon items has almost certainly resulted in at least 10-15lbs of added lightness, and we can for damn sure say it would be too light to meet the minimum weight requirement for WSBK competition.

We’d also reckon RSD’s transformation of the Ducati not only results in a top speed in the ballpark of 200mph, but also brought its already lightning-fast 0-60mph time down to well under 2.5 seconds (probably around 2.1 – 2.3), making it on par, or faster, than the fastest hypercars on the planet like the Koenigsegg Jesko, Bugatti Chiron Super Sport, Aston Martin Valkyrie, or SSC Tuatara — and that’s after factoring in the decreased drag coefficient from the lack of bodywork. The Super is also, without a shadow of a doubt, the most high-performance one-off build we’ve ever featured, and easily the quickest around a racetrack.

Though they’re completely different genres of builds, RSD’s The Super shares a lot of the same general build ethos as Sands’ Super Hooligan tracker bikes, with an overall stripped-down nature that’s still heavily performance-focused. And, while normally we might be a bit apprehensive when it comes to chopping up a rare model of this pedigree, the incredibly-unique nature of a streetfighter of this level of performance and the top-notch design and execution on display have us more than happy to look past that aspect — plus it’s not like they cut up a ‘90s-era Supermono or something.