While it’s not his first custom two-wheeler, Jake Shellito’s entire bike building career had been leading up to this candy red Yamaha project. The result of a mild fascination and curiosity that later became a near-obsession, this two-stroke build can be traced back to Jake’s first-ever build — more specifically; an RD tank.

“I first learned about Yamaha’s RD line after I bought a ’75 RD250 gas tank with an awesome paint scheme at a salvage yard. While researching that paint scheme, I started learning about the RD350 — or ‘Giant Killer’ — and I just had to have one. And about a year later in 2015, I found one,” explains the Colorado-based builder. 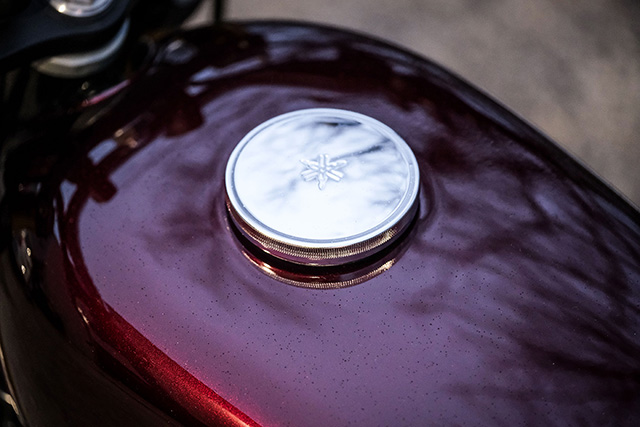 By this point, Jake had long ago finished his virgin build, and had moved on to other projects that he’d also since completed, all the while collecting parts for the RD build that he hoped would eventually come to fruition. Even after picking up the 350 oil-burner — a 1974 example — the component stockpiling continued. By 2018, he now had the donor and the lion’s share of the desired parts needed, though he’d still require one last ounce of motivation to push him over the edge before fully committing. 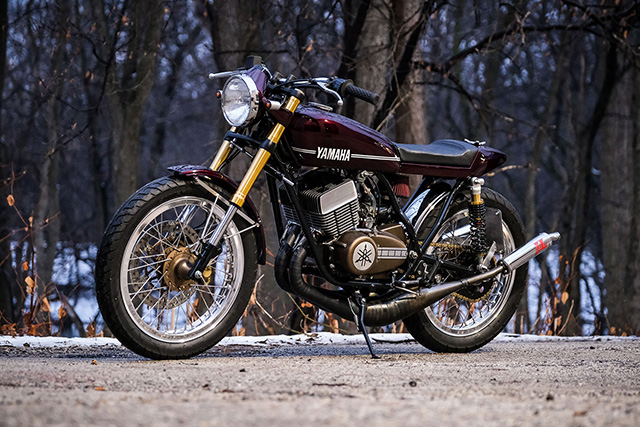 “In the fall of that year I’d just ordered some JL expansion chambers, just more puzzle pieces, and around that same time Old Bike Barn opened submissions for the 2019 Greasy Dozen, which looks for small two-man shops or garage builders with stalled or dormant projects. I literally sent a photo of a roller with empty cases, expansion chambers, and the tank, and a month later I was selected,” recollects Shellito. 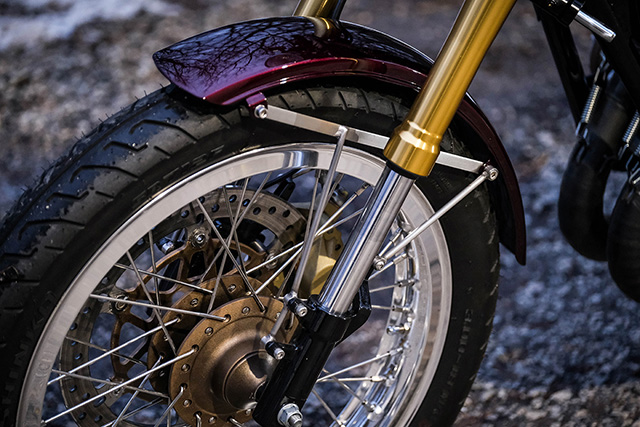 And just like that, Jake had a hard deadline. And though the project already had some of the work done and many of the parts had been sourced, there was still a very long road ahead, and relatively little time, with the event only five-months out.

“Five months isn’t a lot of time when you have a full-tine job, a wife, and two kids that are involved in lots of activities. Honestly, if I hadn’t been selected, there’s a really good chance that this bike would still be unfinished,” admits Jake. 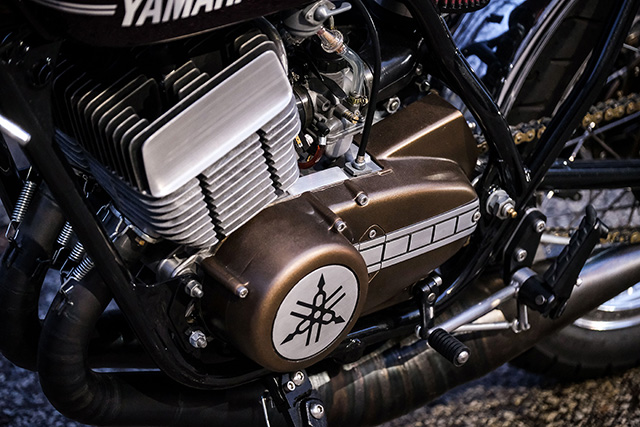 Before even receiving the invite, he already had a solid vision for the project. “My intention for the build was to put a modern spin on a vintage two-stroke bike,” reveals Shellito.

Jake had already started pulling apart the two-stroke parallel twin shortly after it came into his possession, so with the clock officially ticking, he set about getting the rolling chassis in order, starting with the front-end. 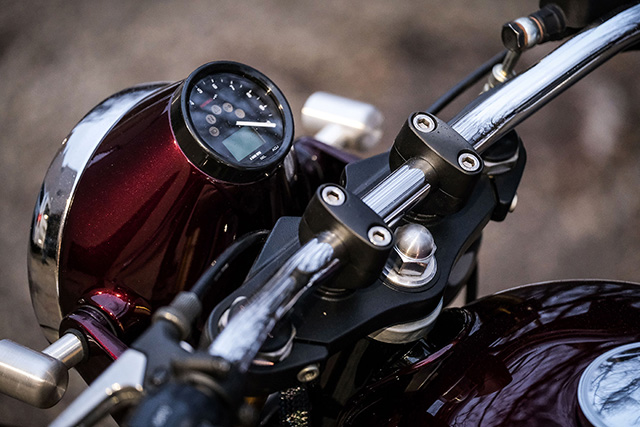 “I also had an idea of using USD forks off of a Honda Grom as I felt the small diameter of the fork tubes would fit the size of the RD quite well. This was a bit of a gamble whether it would work and it required that I remove the Grom’s steering stem, machine the RD steering stem, and re-weld into the Grom lower,” explains Jake. “Axel spacers were turned on my lathe to accept the RD Front wheel as well, and in back there’s a new set of 13” adjustable shocks from YSS that’ve been dabbed with a little gold to tie into the front-end.” 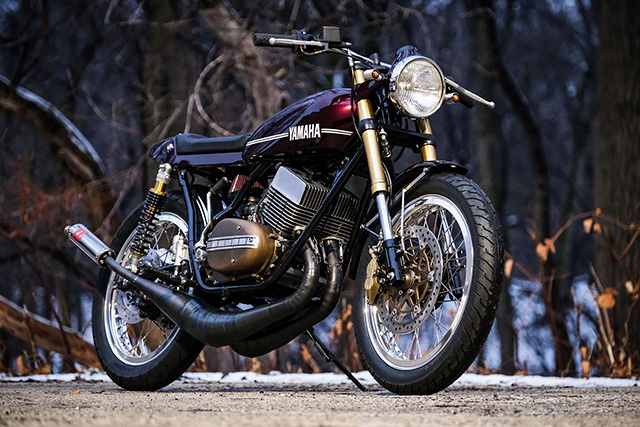 Mounted to the swing-arm is a splash guard that’s made from the original front fender, albeit re-purposed and modified. The front fender is an item borrowed off an unknown dirt bike circa 1970s, now held in new custom mounts and stainless struts. Not wanting to stray too far from the period Yamaha two-stroke family, Jake opted to go with a tank off of a 1970 R5. “I like that it has a bit more shape on the front and a twist-off cap sporting Yamaha’s Tuning Fork logo,” relays Jake. 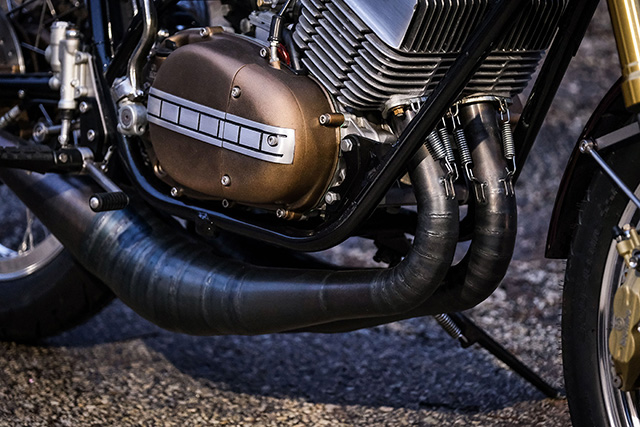 The original handlebars have been replaced with a chrome item wrapped in black rubber grips — both courtesy of Biltwell. The stock headlight bucket has also been modified in order to accommodate a small round Koso gauge — an analog tach, digital speedo combo — sunken into the very top of the headlight bucket. The headlight’s also been made to accept an LED unit, and its aluminum mounts have been shaved down in order to bring the bucket in closer to the forks, affording it a sleeker, more low-profile silhouette. Jake also custom-built the turn signals, and the brake/taillight which doubles as the rear indicators. 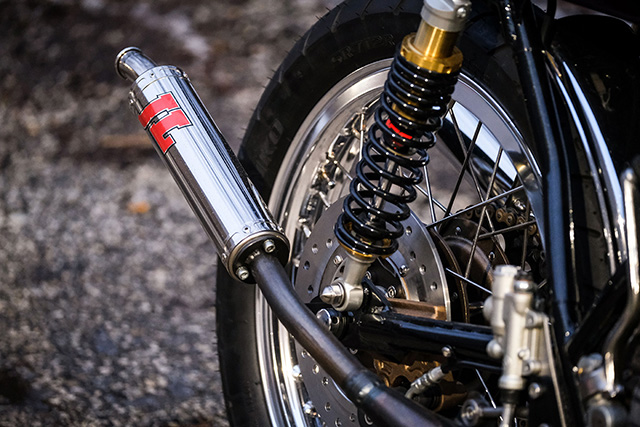 “I really like the look of a clean, open frame so the stock oil tank had to go. To make this work, I figured I could make one and stash it in the tail section. So I picked up a used english wheel and started shaping. I had made a wood buck so I knew the shape I was after. I made a dimple die to recess the oil sight glass, welded in a bung, and topped it off with a Mooneyes spinner oil cap (thanks LowBrow for the hook up). I finished off the tail section by shaping the foam, and upholstering the seat,” explains Jake. 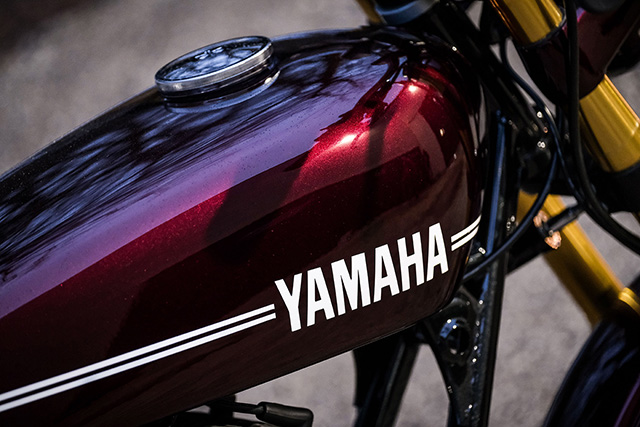 For the wheels he went with a set of shouldered 18” aluminum Excel hoops, powder-coated and laced with stainless spokes, European-market-only RD400 disc brake hubs front and back, and Brembo calipers and master cylinders. A Yamaha rear disc also had to be machined and drilled in order to properly fit.

Wanting to complete the new rider’s controls setup, Jake hopped online and started hunting for a pair of rear-sets, though after not being able to find anything that struck his fancy, he opted to instead make his own. “Starting with some stainless rod and some raw aluminum, I built my own set which also includes integrated mounts for the JL Exhaust,” says Ben. 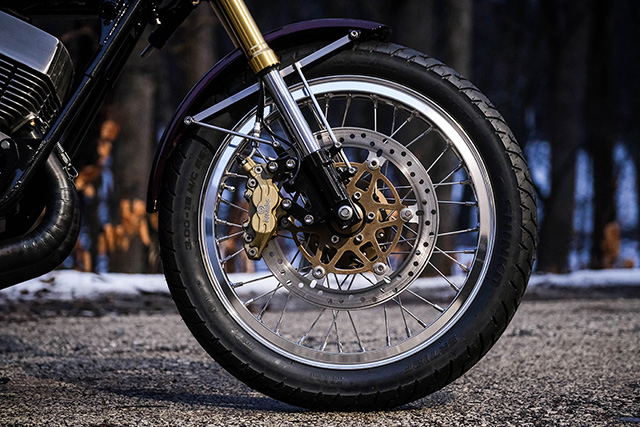 By this time Ben returned to the engine with even grander ambitions. “I rebuilt the crank with all new bearings, rods, and trued it. Installed new clutch, springs, and cable (thanks to Old Bike Barn), along with a PowerDynamo Ignition and charging system. Also added a set of ProX pistons and installed carbon fiber V Force 3 reeds and cages. Machined the side covers to add a retro speed block look, and finished off by powder coating them a bronze color that matches the chain and hubs,” states Jake. 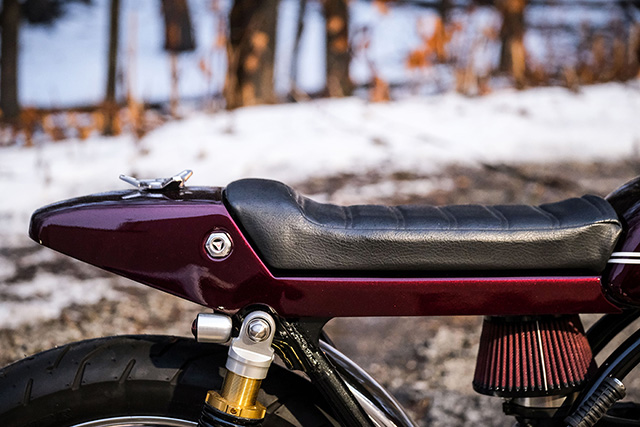 Despite all the custom metalwork, Jake says the most challenging decision he made over the course of the build centers around the choice of livery. In the beginning, he was keen on a royal blue scheme, but in the end decided to go the more-retro route, staying more in line with the original factory hue, albeit while employing a more modern PPG candy color for the tins with painted graphics, while the frame’s been adorned in a coat of deep carbon black metallic. “Honestly, I’m still kinda on the fence about the color choice,” admits an overly-self-cricital Jake. “I jokingly call it ‘The Raisin’ because in direct sun light its got a nice ruby red glow, but take it out of the sun it turns a deep purple kinda color like a raisin. My wife likes to call it ‘The Mistress’ (for obvious reasons), but usually it’s just referred to as the ‘RD’.”

With everything else completed, Jake spent the night before leaving for Ohio getting the last details in order. When it finally came time to fire the thing up for the first time, it was no dice. After repeatedly trying to no avail and with work the next morning rapidly approaching, Jake called it a night. 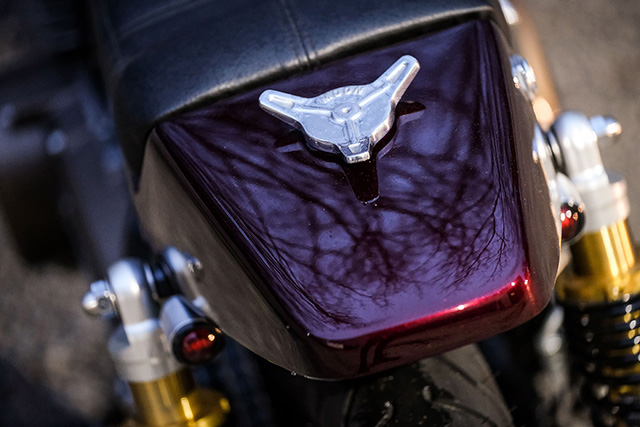 “The next morning at work I’m telling a friend how it wouldn’t start. I pulled up a picture of the carbs to show him and realized I’d installed the floats upside-down. When I got home I flipped them and it fired up within a few kicks. So, I took a quick lap around the block before I loaded it into the trailer to make the 20 some hour drive,” recalls the husband, father, and builder. 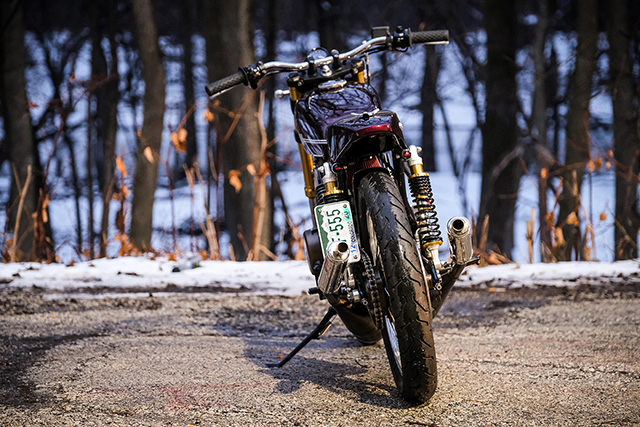 In the end, Jake’s story of the build that almost never was had a happy ending. The “RD” made it to the show, in running shape and in one piece where it was oggled by legions of fans and enthusiasts. And, arguably even more importantly, the builder successfully achieved his goal of delivering on a modernized two-stroker.

“There’s a ton of custom work on this bike, but at the same time — aside from the inverted forks — it looks like it could have come from the factory this way. I just really like a lot of subtle details but like the vintage look too.”

The bike was the runner up in the Custom Classic class in the US Championship in the J&P Cycles Ultimate Builder Custom Bike Show at the Progressive International Motorcycle Shows. 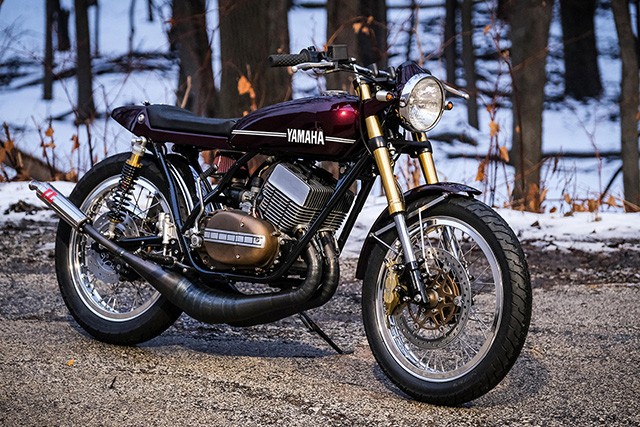