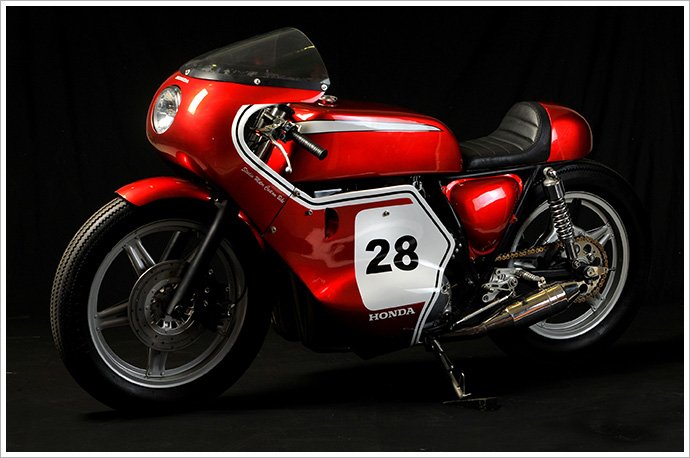 I went for my first ride in a tuk tuk this week. Do you think I was in Singapore? Nope. Laos? Not even close. Thailand? No siree… I was actually in a workshop on the outskirts of Sydney. I got the idea of it though, garishly decorated and loud, a simple means to get around. Hailing from the same part of the world, comes a bike that is the healthy opposite to the idea of a tuk tuk. Well thought out aesthetics, the note of 736cc of Honda quad cylinder power, and a race fairing beat out of galvanised plate come together to show (once again) the talents of Donny Ariyanto at Studio Motor. If only as much thought went into tuk tuk design as went into this. After spotting a replica of ‘Bugsy’ Mann’s famous CB750 racebike at the mall, an inspired Nugroho O.S commissioned Studio Motors to build him a bike modelled on the 1970 Daytona 200 winner. Starting with a bike that looked sad, but with an almost original condition engine, Donny and his team got to work. In true Studio Motor style, 1.2mm thick galvanised plate was used to form the fairing, gas tank, fender and tail. And because racebikes, even replica ones, aren’t complete without rearsets, a pair was sourced from Nui projects. The factory front end has been ditched, in it’s place a Suzuki Bandit 400 pair of forks. The Bandit’s Nissin master cylinder and caliper have been retained to add to the stopping power of the front end, to bring it more up to date. 19 inch wheels are fitted front and rear, with Donny convincing Nugroho to keep the Comstar rims, to keep the bike looking as period correct as possible. The bike is rather visually pleasing, Komet Studio applying a Spies Hecker based candy red with varnish. The wetlook effect finish is exactly what Donny was aiming for with the paint. The powertrain got a freshen up too, the engine block covered with a mix of powdercoating and polishing offsetting each other. The exhaust is entirely custom, put together by Asky Custom Muffler to bring out the beautiful note of the Honda 4. Donny and Studio Motor have really come into their element, using all their resources, on top of their own abilities to produce this machine. The paint, the lines, the skinny tires all work together to produce a replica of a replica – which is something amazing in itself. And in a part of the world that produces something as aesthetically and aurally displeasing as the tuk tuk (they do put a smile on your face though), it’s good to know there are guys like Donny around to show us some true automotive beauty.