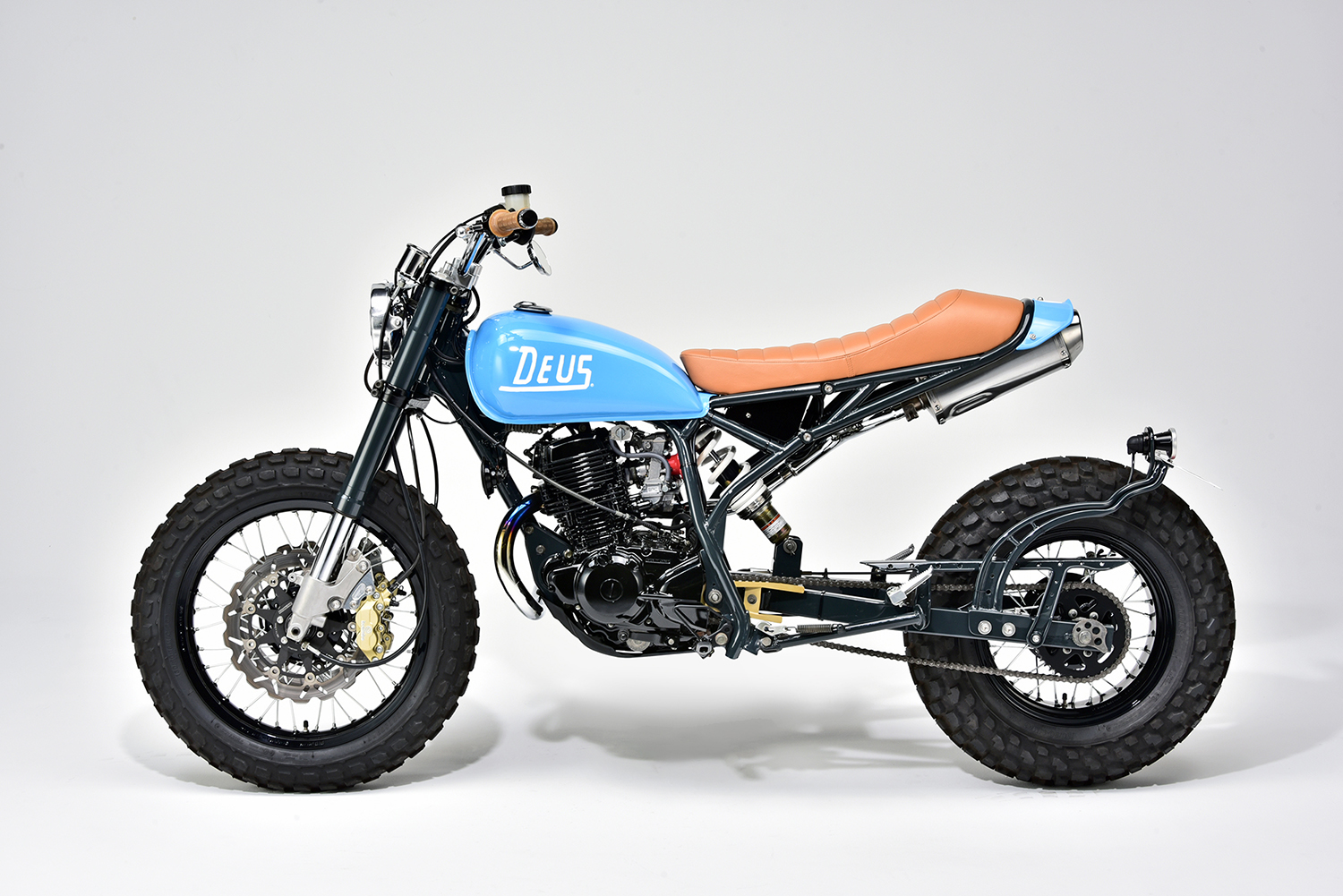 The proliferation of blogs and social media has connected the global bike-building world like never before. Styles and build types that were once unique to their specific areas of origin can now be found on just about every corner of the planet. Despite the now Omni-connected nature of the modern customs scene, one genre of build that’s largely failed to catch on outside of its native locale is the Japanese Suka-Tune style.

Suka-Tune bikes can best be described as spartan street scramblers with an intentionally rough, almost brat-like influence and an overall minimalistic visual theme. The term Suka-Tune actually comes from the word “Sukeru” — Japanese for “see-through.” Knobby tires, swept-back bars, an exposed engine and framework, and a lightly stretched swing-arm are all additional hallmark traits for classic Suka-Tune projects.

With his personal build style largely having been shaped by his upbringing on the island, Deus Ex Machina Japan’s lead wrench, Tomoyuki Soeda possesses a major proclivity and soft spot for traditional Suka-Tuners. So, two-years-ago, when Deus Japan received a commission that requested a two-up-friendly dual-sport build, but otherwise gave the shop complete creative control over the project, Soeda took the opportunity to return to the Suka-Tune genre.

With the Suka-Tune theme locked in, a turn-of-the-millennium era Yamaha TW225 was the obvious choice for the project’s donor, with the 223cc Trail Way being something of the archetypal Suka-Tune platform. Once the donor was acquired and put up on the bench, Soeda set about stripping down the bike, removing the front and rear suspension and the Yamaha’s bodywork in their entirety and lopping off the stock subframe.

Out front, the conventional set of telescopic forks were replaced with an inverted unit off of a late-model sportbike. Now slotted in custom triples, the new USD front end also retains its dual disc brake setup with top-shelf Brembo calipers and petal-style rotors. In the rear, an aftermarket mono-shock is now linked to a swing-arm that’s been lengthened by several inches before having a bespoke tubular construction wraparound license plate and taillight holder and a custom chain guard both bolted into place.

Still wearing its factory skid plate, the air-cooled SOHC thumper’s been painted with a coat of gloss black before having its cooling fins polished down to the bare metal. From there, the stock respiratory bits were jettisoned to make room for a race-spec Keihin carb fed through a red velocity stack. The complete stock exhaust system was also binned in favor of a full custom unit with a burnt and blued chromed header feeding into a LeoVince X3 muffler that now ejects spent fumes from beneath the seat.

The frame was completely de-tabbed before being gifted a single-piece subframe that’s mated to the main chassis via two pairs of Allen-keyed bolts. Resting atop the kicked-up framework is a split-and-ribbed light brown leather saddle that rests perfectly in the new frame hoop before being capped off with a sliver of a rear tail cowl that shrouds the end-cap of the under-tail muffler.

Where the TW’s original 7.0L plastic tank once sat now lies a refurbished vintage fuel cell plucked off of a 1970s era donor and then modified to agree with the lines of the Yamaha’s frame rails. Just behind the point where the new seat and tank meet is a small electronics tray with custom triangular metal side covers that keep the build’s battery and other unsightly electrical bits hidden from view.

In place of the Trail Way’s factory wheels, Deus’s Japan location has laced the Suka-Tuner up with a set of black DID DirtStar rims with bare metal spokes and on/off-road-appropriate knobby Bridgestone rubber. As per the customer’s few requests, the pillion-ready custom saddle has been paired with a toothed set of passenger pegs set on bespoke brackets at the front of the stretched swing-arm.

Even with the TW225 already boasting a fairly clean cockpit, Soeda has managed to tidy things up even more with a totally revised rider’s quarters. Though the stock handlebars appear to remain in play, they’ve been bestowed with bar-end LED indicators from Motogadget, a tiny analog speedometer resting ahead of the bars in a custom housing, a single circular mirror, a quick-turn throttle, and light brown rubber grips to match the new seat.

The dated-looking, square headlight unit that the donor left the factory with has been replaced with a Stadium brand circular item with a yellow lens that’s held in a one-off chromed housing. Brake and taillight duties go to an old-school red circular light that’s offset to the left of the build’s wraparound license-plate bracket.

The build’s paint job appears rather uncomplicated, though there’s more going on than first meets the eye. The tank and tail cowl now sport a glossy, almost powder blue, decorated with white Deus shop logos on the tank and a symmetrical white accent shape on the tail cowl. The engine, triple tree, bash-guard, license plate bracket, and rims have all been cloaked in matte and gloss coats of black, and while it may appear the build’s fork uppers, swing-arm, chassis, and subframe have been adorned in the same hue, they’ve in fact been hit with a dark, almost grayish-blue.

While we weren’t given an exact weight figure, we can confidently report that Soeda and the gang have undoubtedly managed to add some extra lightness to the TW’s already svelte sub-280lb (or 127kg) curb weight. The free-breathing intake and exhaust systems have also likely added some extra oomph to the donor’s original 17.5 horsepower output.

Whether or not it jives with your personal taste, there’s no denying that Soeda has absolutely nailed the Suka-Tune aesthetic. And though it was intended as something of a custom two-wheeled homage to a bygone build type, with this project marking the second TW225-based Suka-Tuner that Deus Japan has unveiled in the last few months alone, we wouldn’t be at all surprised to see a resurgence in the genre, both on and off the island of Japan.