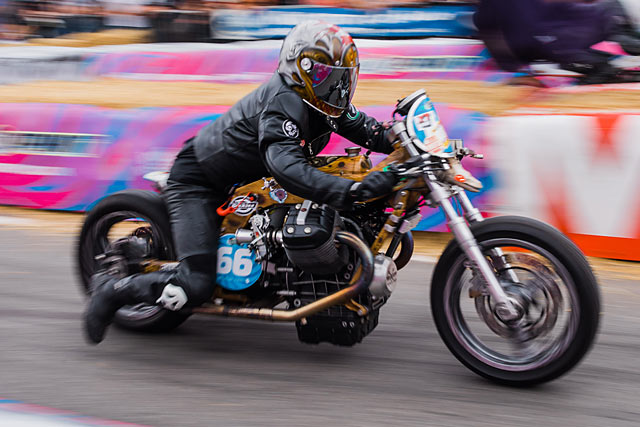 The Glemseck 101 event in Germany’s Leonberg describes itself as a motorcycle ‘happening’. Now while that may conjure up images of naked, badly painted hippies dancing to experimental synthesiser music, the last 10 years have proven it to be a lot more interesting than the moniker may suggest. Hell, it’s probably running neck and neck with Wheels & Waves to be the best motorcycle show in the whole world. So what could they do to up their game even more? How about having the Sultans of Sprint come over for a little nitrous-fueled playtime?

Of course, this isn’t something new. The Sultans have been partying at Glemseck for quite a few years now. And being the third race in the event’s season, it can prove to be quite a tough one for the bikes. With plenty of stresses and strains already placed on their lithe little frames and handmade mechanicals, it’s often third time lucky for those pesky racing gremlins. 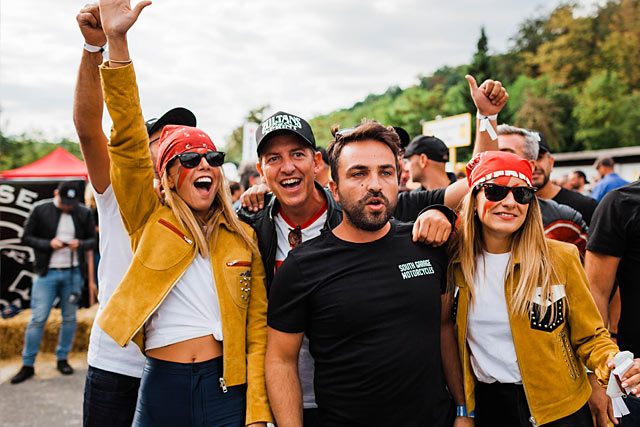 But with the heat of Spa now a distant, sweaty memory, it was the event’s stupendous crowds that proved to be the biggest challenge. But crowds were no match for the BMW’s offerings, which killed it with their incredible efforts and professionalism. And they were just one of the event’s myriad of loud, two-wheeled highlights.

In the Factory Class, another victory for the Triumph Motorcycles X Mellow Motorcycles team on their Thruxton R meant plenty of high fives for rider Arne Tode despite some technical difficulties on the Friday. Now with fairly strong lead on the leaderboard, it will take a pretty decent effort to snatch victory from their jaws. Needless to say, Arne’s Moto 2 experience probably accounts for much of their success here – as does his efforts winning the party monster bonus points. Corners? Sobriety? Who needs them! 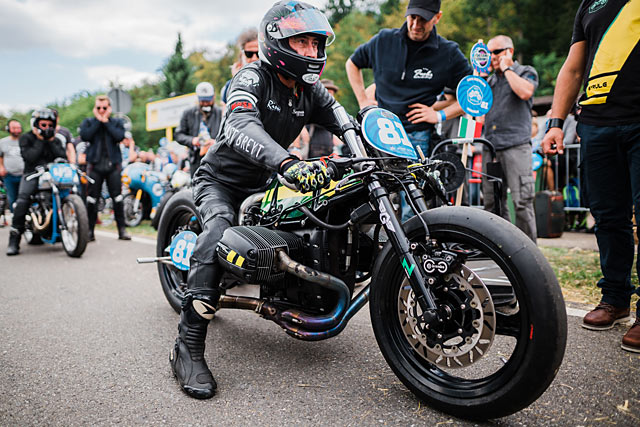 Second place in the division was secured by Jens Kuck on the Yamaha Motor Europe XSR700 bike tuned by Workhorse Speed Shop. This handed some very useful points to the Belgium team. And in third place was the Indian FTR 1200 bike, back on form after missing the Spa round due to some urgent repairs. Apparently what she lacked in overall speed she more than made up for in blue smoke and wheel spins.

Bronze was taken by Rolf Reick and his Krautmotors with their transforming Little Go Beep BMW R nineT. Also heavily involved in organising a big Glemseck race on the same weekend, the man is clearly one of the most experienced sprint racers the Sultans has. 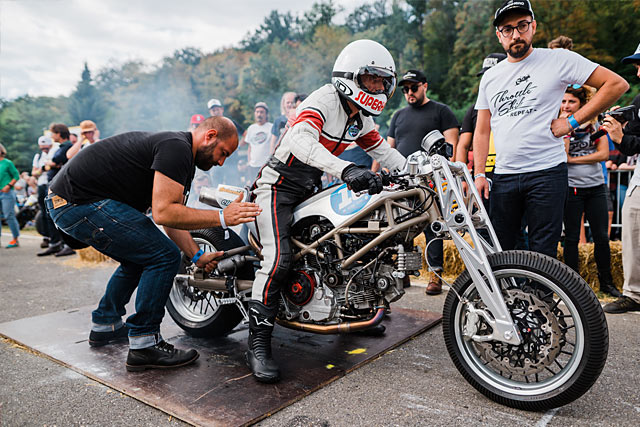 And what of the Freak Class, I hear the freaks yelling? Daniele Ghiselli did a great job at the handlebars of the Superhero Ducati built by South Garage Motorcycles in Milan. Fearless of the fastest teams, Daniele was running very bloody fast for this round and deserved the 1st place trophy. Despite issues with his nitrous oxide system, Phil Ludwig managed to finish in a well deserved second place on his 4 valve 900cc BMW via Team Krafstoffschmiede. Third place was nabbed by rookie rider Yong Kimon on the mighty Yamaha Skinny Beast from Team Schlachtwerk.

As a special guest entry, Royal Enfield raced in the Freak Class with their beautiful Lock Stock prototype, using the company’s brand new 650cc twin cylinder engine. Also equipped with a full custom Harris frame and highly tuned engine by S&S, the bike ridden by legendary Aussie Paul ‘Youngy’ Young had to race against one of the Sultan’s strongest teams, FCR Original with their super quick Triumph Crazy Bonnie. After an incredibly close race, a minor shifter problem robbed him of victory against the mighty French team. Clearly the Royal Enfield engine is strong enough to handle a permanent spot in the Sultans of Sprint Factory Class. C’mon Team Enfield! What’s keeping you?

Overall, the races were said to be super tight right across the board. Most riders had to battle quite hard on the drag strip to take home the metal. Unfortunately (and despite the massive support of the other teams) a few bikes were not able to make it to the start line. Team Radical Guzzi crunched the NOSferaTURBO just before the event, while a broken valve scuppered Team Moonraker while warming up the engine a few hours before the race and the St Brooklyn Team had some pesky ignition problems that couldn’t be resolved before things got underway. [superquote]“The two vinyl DJs – Jens and Jörn – apparently went off like a bottle of nitrous in a bonfire.”[/superquote]

And while the Sultans parties are now the stuff of legends in the scene, the attendees reported that this particular bash was above and beyond. As always, extra points were earned through the “Party Monster Bonus” scheme – this time the team mascots were asked to dance with their respective riders on a podium to kick the party off. And if the sight of the Cookie Monster gyrating in a über sexy fashion for the pleasure of the crowd doesn’t do it for you, we don’t know what will. More than a few survivors of the night’s festivities asked us to make special mention of the two vinyl DJs – Jens and Jörn – who apparently went off like a bottle of nitrous in a bonfire. Nice one, boys! 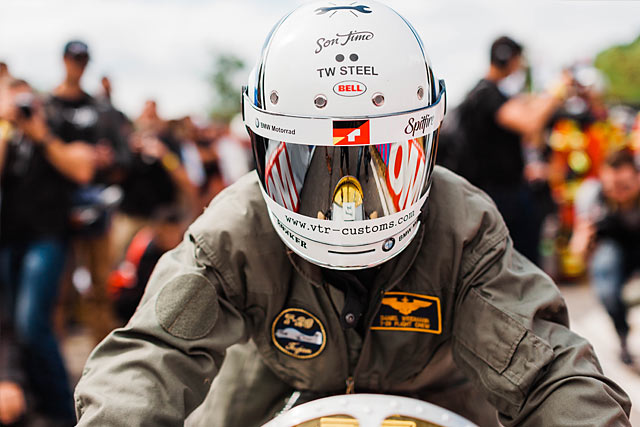 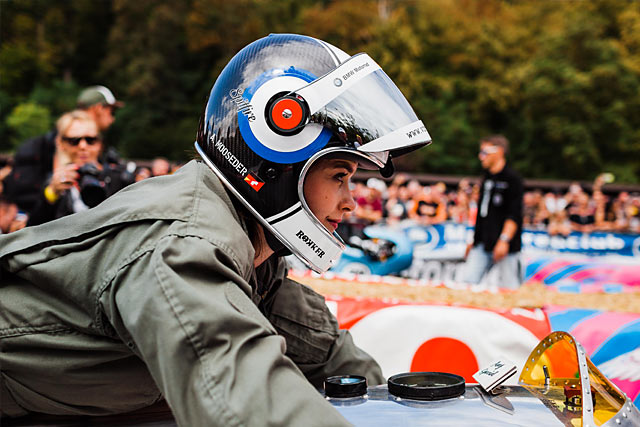 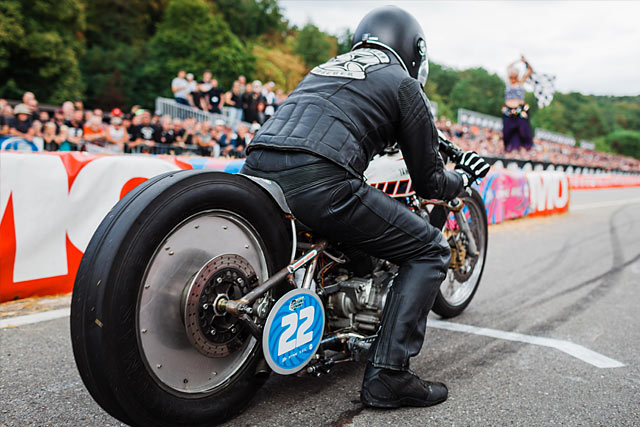