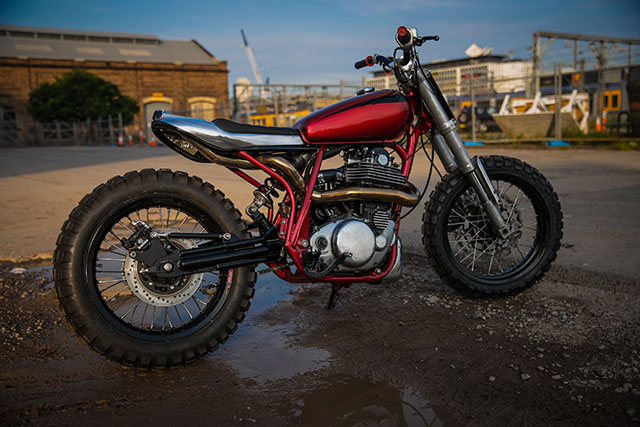 The dust has settled for another year on the third Machine Show based in Braidwood, NSW, Australia. The show features a Bike Build competition every year, where dedicated motorcycle builders build unique pre-1989 bikes specifically for the show. This year they had 36 entries of all different styles and marques – from choppers to café racers and everything in between. One of the stand-out builds was this Supercharged SR400 tracker by Keeley Pritchard. As soon as we saw the 1986 SR400, we knew a lot of blood, sweat and tears had gone into the bike, but didn’t realise how young the builder was. Keeley is a 22-year-old motorbike mechanic from Sydney’s Northern Beaches who works for a garage called Surfside Motorcycles. In the lead up to the show, when everyone had gone home and his boss had turned off the lights, he turned them back on and worked well into the night bringing his creation to life. 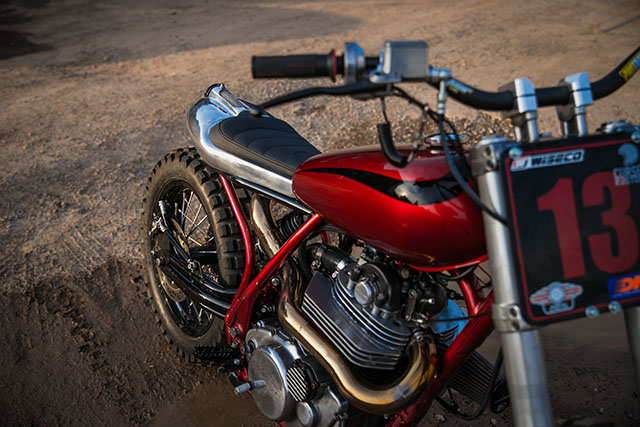 When Keeley was thinking about entering the 2019 Machine Show Build Comp, he came up with the idea to turn his ratty 1986 SR400 chopper into a dirt tracker. “I wanted it to be a stunning, clean and simplistic hand-built dirt bike,” Keeley says. “I had 10 months to complete the bike to perfection before the show.” 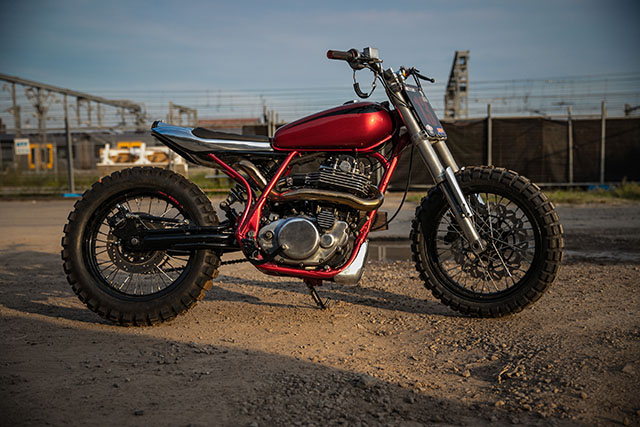 So Keeley got to work. “The first feature that I thought of was customising the motor with big fin heads, so I extended each fin individually by 2 inches,” he says. “I spent hours cutting out pieces of aluminium plate, pre-heating the head to prevent cracking and finally TIG welding the two pieces together.” When it came to replacing the front end, he wanted the bike to handle like it was on steroids. Luckily, he had the perfect bike to steal some parts from: a messed up Ducati monster that had melted electricals. “I used the Ducati’s suspension and brakes, but also converted the dual shock suspension into mono shock.” He also found some RMZ 17” Motard wheels and a 320mm disc brake to increase the much-needed stopping power. As for the engine, Keeley really wanted to push the boundaries on this SR400. “I wanted it to spin the back wheel in every gear.” So he did what any sensible person would do in his situation: he mounted an Aisin AMR300 supercharger – but not without a few challenges. 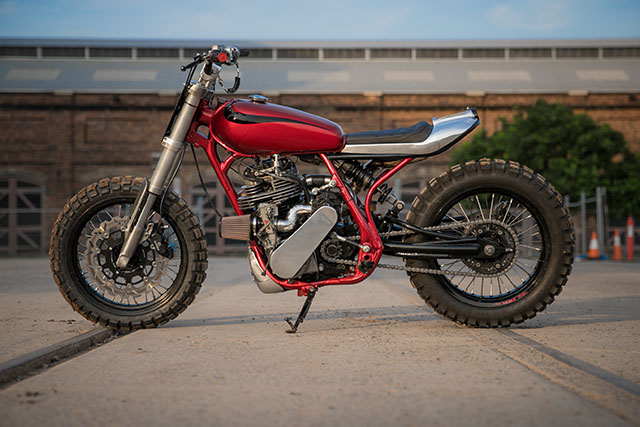 To start with, he put pen to paper to figure out the drive ratios of the crank and the supercharger pulley, then rebuilt the motor to lower the compression ratio. Unfortunately, this didn’t work out so well. The supercharger blew up one week before the show. “After putting a shout out on social media, the bike community came together and I was rescued by Gold Coast legends Pop Bang Classics and Purpose Built Moto – Pop Bang Classics gave me his supercharger to borrow, and Purpose Built Moto delivered it to me when he flew down to Sydney.” You gotta love the bike community. 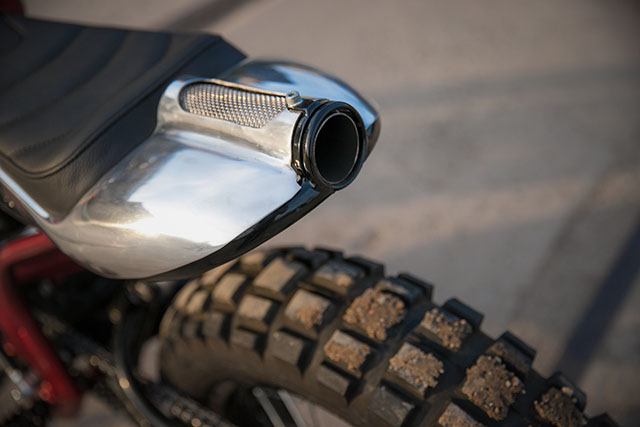 The rear end is a work of art. The exhaust was the focal point for the body work which was made by the wizards at 666 Fabrication, and Keeley built the beautiful rear body to fit around it, with all the covers continuing the same lines. All the mounting bolts are hidden, and he went to great lengths to keep it as clean as possible. “My favourite part of the bike was the most tedious to create, as I spent countless hours building and polishing the aluminium body work.” 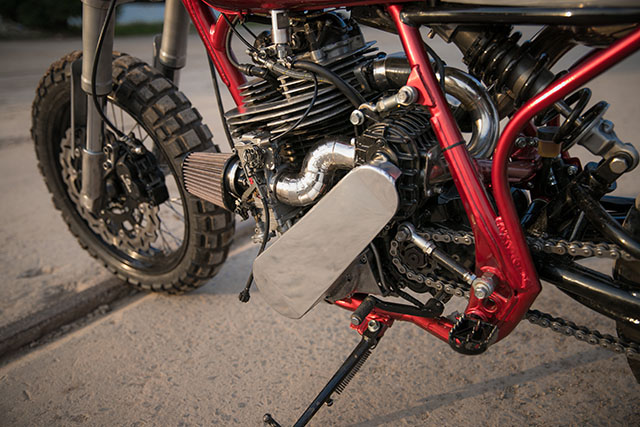 The tank and frame were sent off to Cursed Customs to get a nice new coat of DNA paints split blood candy, which just works perfectly with the polished aluminium. While the custom seat was upholstered by the appropriately named Bad Arse Trim Company. Even the air filter was custom, with DNA Filters doing a special collab with Keeley’s name sitting proudly on it. 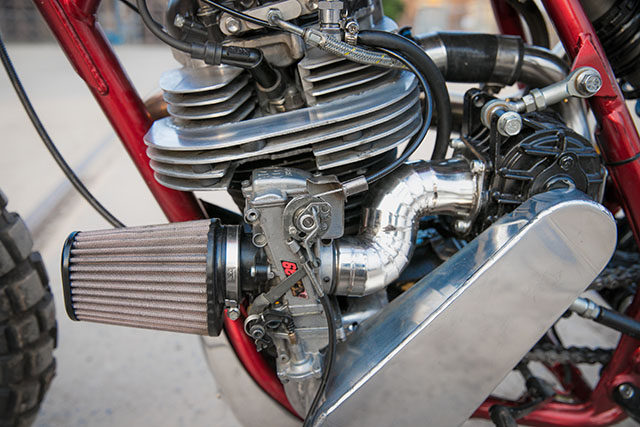 Keeley spent too many hours to count over the 10-month build period, but all the hard work paid off in the end. His supercharged SR400 dirt tracker ended up taking out first place in the Machine Show Build Comp – and luckily his boss loves the bike. He can work late any time he wants. 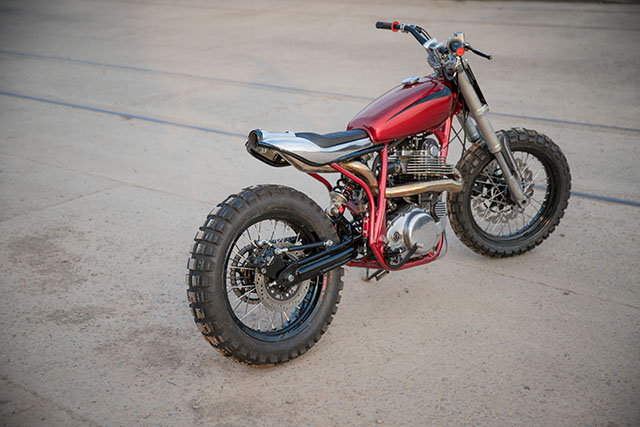 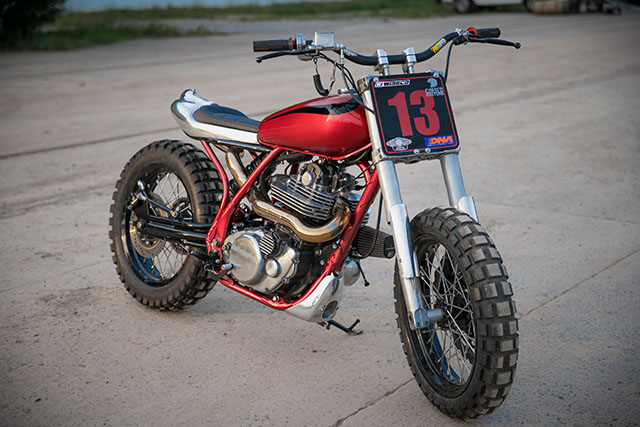 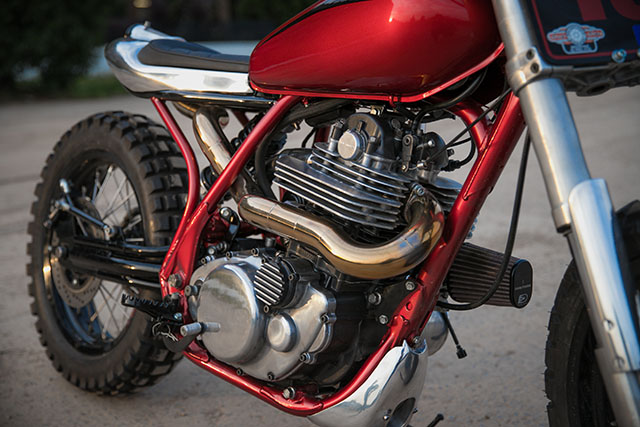 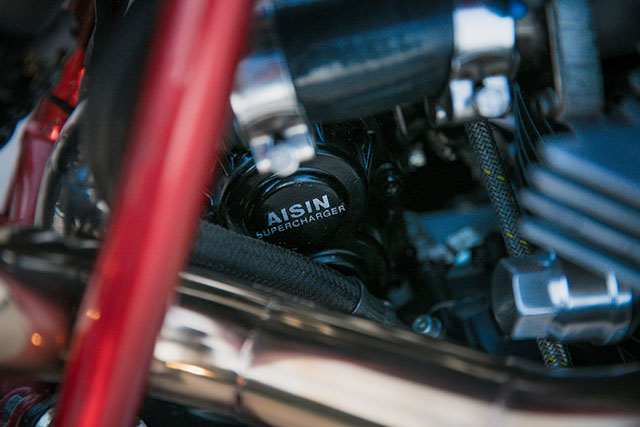 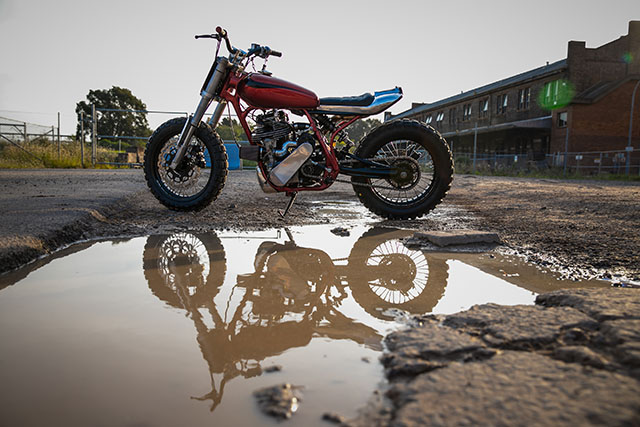 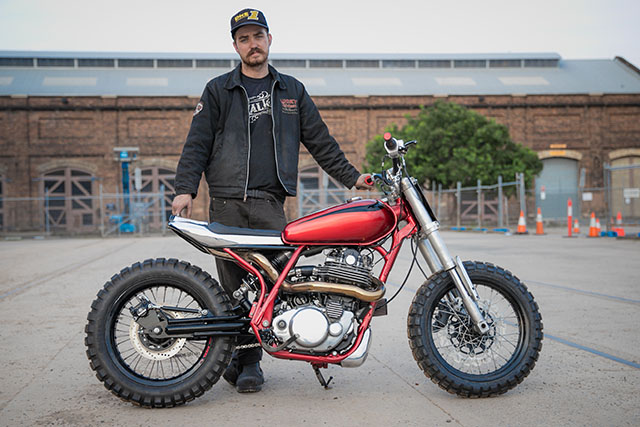