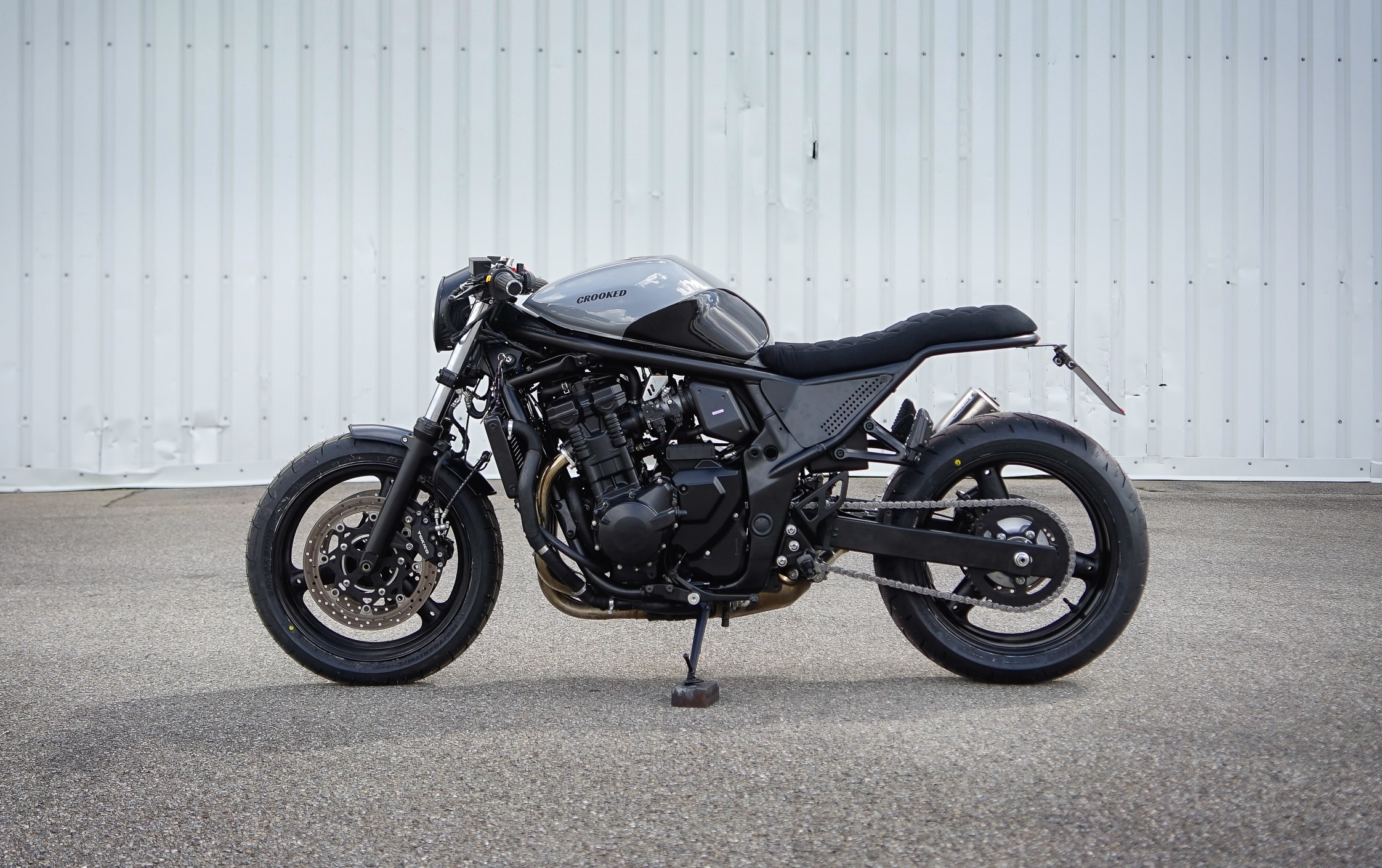 A custom bike building business can have all the tools in the world, the best technicians and decades of experience, but when the customer wants you to focus their build on their current bike, you’re at the mercy of their chosen machine. Some clients will turn up with a BMW R or Honda CB and it’s smooth sailing, others want their Kawasaki ZZR turned into something cool and the headaches soon turn to migraines. Thankfully for the crew at Crooked Motorcycles in the stunning city of Memmingen, Germany, it was the ever-versatile Suzuki Bandit that rolled through the door; allowing them to work their magic to produce a modern cafe racer for tons of two-up fun.

So will any Bandit do? While it’s true that just about any Bandit from any year or capacity will make a good donor, the owner selected the 2007 model and reaps a few extra rewards. The chassis was stiffened for the then new model, the suspension was revised and a longer swingarm fitted, all adding up to better handling. The new liquid-cooled engine also added 56cc extra capacity, fuel injection and with the hp up a touch, the big improvement is the low down torque and freer revving engine. Plus there is ABS, so if you’re looking for one for your own project the 07-12 model might just be worth those few extra dollars.

Now on with the show and as Crooked’s Dominikus tells us, the customer “ordered a modern looking cafe racer with the option to ride it with a second person.” Just about everything else was open for the workshop to choose, just so long as they stuck to the budget. The first area to be addressed, after the stock plastics and seat were removed, was to do something about that god awful factory subframe. With it integrated into the frame a new design was drawn up, the old one cut off, and then it was time to bend some tube. The Crooked version is much nicer, allowing the rider to sit down into the bike, with a neat hooped rear with just enough room retained for the passenger.

With the standard rear plastics incorporating the original side covers, a new set was bent from sheet, drilled and fitted. Before they and the new chassis work received a coat of frame matching paint to tie everything together. A new seat base was next on the fabrication list, with an enclosed electrical box acting as an inner fender then built to house a new lithium battery. To ensure it had the durability to match its location the box, swingarm and a host of other parts were then sent out for black powder coat.

This gave the crew time to focus on the bike’s looks and the standard front headlight and big dual instrument cluster were tossed aside. New mounts were then fabricated to sit a Koso LED headlight much closer to the forks and it’s topped with a custom fabricated aluminium cowl for a sleek look. The stock tank is not a bad looking piece and with it panel beaten back to factory condition, it was coated in the ever popular VW Group Nardo Grey with Black accents and the company logo. A new seat was shaped from foam to provide a comfortable and practical ride before being covered in Alcantara.

Wanting a clean look, the factory bars and risers are gone and in their place are a set of ABM clip-ons that give the look but are set at a sensible height and angled flat for comfortable riding that won’t break your wrists. The extra room gave the guys an idea, so the top triple clamp was machined to accept a Motogadget Motoscope speedo and a second slot machined for a set of idiot lights. To match the ultra-clean look, Motogadget grips and m-Blaze disc indicators complete the bars. Lighting at the rear is a clever mix of frenched in brake light, number plate holder, and turn signals.

It’s clear that the team wanted to maintain absolute practicality with each of their custom touches and that extends to the engine too. The cases have been redone so that the black finish is picture perfect and the airbox retained for smooth fuelling. But to give the bike a little extra pep, the big factory muffler is gone and a Speed Pro Cobra end can ensures that the passenger is treated to the full four-cylinder soundtrack. Little touches keep the bike looking new with stainless clamps and new pipes on the engine and a practical touch in the form of a trimmed down metal front fender that is finished in black.

Literally wrapping up the build is a brand new set of Bridgestone Battlax tyres, an all too overlooked component of any build, good rubber, the one thing truly between you and the blacktop. With that, the boys from the old Roman city of Memmingen were ready to hand the bike over to one very happy fellow German. Crooked Motorcycles can build a crazy custom with the best of them, but in the ever versatile Bandit they delivered a bike that looks a million times better than the factory 2007 version ever did, while retaining all of the good stuff that the Suzuki engineers spent all that time developing.