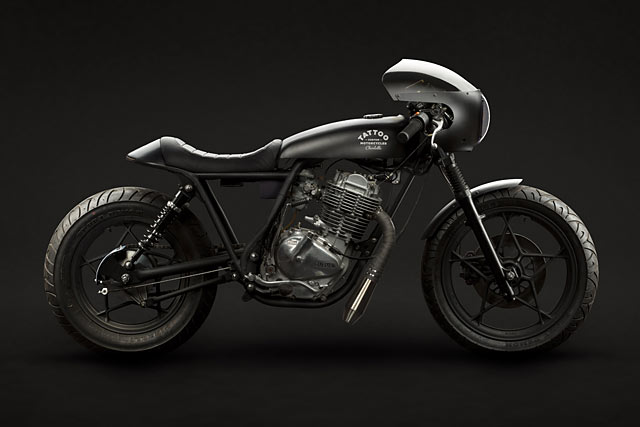 North Carolina’s Tattoo Custom Motorcycles have many strings to their bow. Out the front of their shop they’re an advertising company, working with a wide range of clientele. But their fearless leader, Rudy Banny, also has a healthily unhealthy passion for motorcycles. And somehow he’s worked that into the business, building amazing custom bikes out of the back of the company. Bikes like this, a tidy little Suzuki GN400 cafe racer dubbed the ‘Vampire Slayer’. At the beginning of the project the team at Tattoo Projects were looking for a venerable Yamaha SR500, trawling the ads on Craigslist for a local example to cut down. Then they stumbled across the GN400 – the oft-forgotten competitor for the Yamaha that was only in production for a few years. But, scrolling through the classifieds, the Suzuki GN caught their eye. ‘It was already a pseudo-custom build,’ Rudy says. ‘It was a real homemade scrambler. It maintained the street bike vibe but had enormous suspension travel and ground clearance. The seat was custom but just as huge and horsey as the original. One of the photos had it all loaded up with camping gear. And it looked pretty cool that way, but I had other plans’.

[superquote]“It was a real homemade scrambler. It maintained the street bike vibe but had enormous suspension travel and ground clearance.”[/superquote]

Those other plans drew inspiration from one of the most famous custom builds of all time – Deus Ex Machina’s ‘Grievous Angel’ cafe racer. If you think you haven’t seen it, trust me, you have. It’s the gloss black mag wheel SR with a little bikini fairing and slimline tank. It’s got to be one of the most famous bikes to be wheeled out in the last ten years. So with this image in mind the Tattoo Custom Motorcycles team stripped the GN down to its bones. The tail end was chopped off and a new loop with integrated LED lighting installed. The LED’s were actually the main headache for the team, having to go through a period of trial and error to get it all working with the old 12 volt system.

Then work started on the wheels and suspension. The star-shaped mag wheels had the bearings pulled and were sent to Hot Box powder coating while the suspension was cut right down – with more than 5 inches taken from the front forks. That sounds dramatic until you remember the thing was riding at near-stratospheric levels when the team got it. Rudy and the team then looked to the fuel tank. ‘The plan was for a small low profile tank like the Grievous Angel, without dropping five hundred dollars for a replica,’ Rudy says. ‘We had a generic tank sitting around the shop so we lopped 3” off the bottom of it and welded a new bottom in place and we love the look.’ With the new tank mounted up the guys broke out the fibreglass and made up a new seat pan before sending it off to the genii at Larson Upholstery. The simple, clean lines continue up front. The cockpit is a simple affair. It’s got clip-ons, kung-fu grips and a quad lock mount to run a Speed Tracker app right over the centre of the triple tree, which is hidden away behind the bikini fairing. Final details include the shortest of short header systems, a stubby front fender and a matte black paint scheme. And the name, Vampire Slayer? Well, not only does it look like something Van Helsing would barrel around on, but Rudy’s business partner is a huge fan of the build. Her name? Buffy. And she’s not the only one smitten with the moto – Tattoo Custom Motorcycles have no problems summing up why the cafe Suzuki’s such a little looker. ‘I love how simple everything is,’ Rudy says, ‘Everything is in plain sight. There’s no glitz or glamour – just two wheels, a simple motor and a few bare essentials’