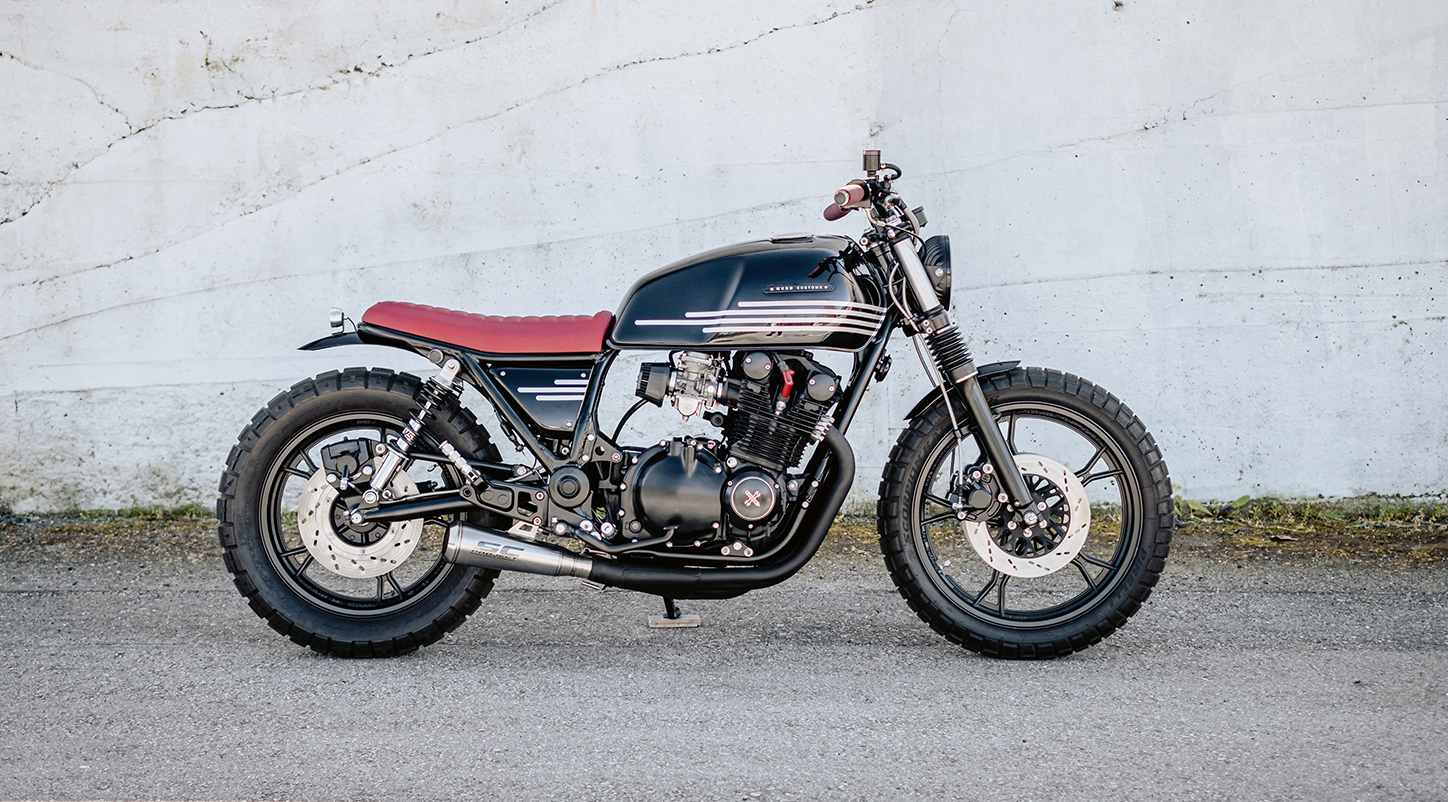 Team Suzuki recently won the last round of the MotoGP season, and despite winning the rider and team title in 2020 just two years ago, they’re leaving the sport. The company has also confirmed that the range-topping GSXR1000 will be no more, with tighter emissions laws forcing it out of the production line-up. So it’s worth looking back and considering just how important the Suzuki GS has been to the motorcycle world; innovative, fast and reliable, the GS range might not have always been the sexiest thing on two wheels, but they’ve always been brilliant to ride and offered something for everyone. In 1984 if you wanted a sport tourer with silky smooth torque, you bought a GS1100G, and now Portugal’s WKND Customs has given one a picture-perfect makeover for its mission to maul the Parisian streets.

Based in the city of Porto, WKND Customs was always meant to be for building bikes on the weekends and in owner Sérgio Almeida’s downtime. But as the orders kept rolling in, the art director by trade made that his part-time focus and shifted more attention to building custom bikes. This build started life when the client happened to be visiting the area from Paris and was on hand to see the unveiling of the then newly finished WKND Kawasaki KZ400. The Parisian quickly had himself perched on the bike, was taking happy snaps with it and told Sérgio that he wanted to commission a bike immediately.

“A couple of days later he just dropped a Yamaha XT600 at the workshop. I sent him a render with the concept for the Yamaha, and his reaction was so good, that he just called me right away asking if I wanted to build another bike, a 1984 Suzuki GS1100G. After some photos of it and another render with a concept, he ended up loading the bike in a van and driving all the way from Paris to deliver it to me,” Sérgio smiles. But those smiles quickly turned to concern, as the bike wasn’t so much a rolling set of wheels, as it was a bunch of boxes and clearly not everything was there.

So the first task for Sérgio was to build the bike up into a complete unit as best as possible, and then work out what would have to be ordered in, what would he custom make and which rare parts would require a Europe-wide search to find. Unfortunately, Covid and other supply chain issues meant the latter ended up being a longer and more frustrating list than he’d hoped, but that didn’t stop the progress.

“The frame was de-tabbed, the rear shortened with a loop and the gas tank received some work on the rear section, with some subtle cuts and small adjustments on the position to be more aligned with the rear frame. Things that I believe make the difference at the end, to make everything just look right.”

Under the seat goes an electronics tray, and things were starting to look incredibly neat. To take that even further, the stock side covers were used as a template, with more attractive rounded-off items fabricated, and new mounts made so as to expose the steel tubular frame underneath.

The bike had come with an angular and clearly not stock fender, so again Sergio swung into action, neatly crafting one for the front and rear, and retaining the ultra-clean lines he had always envisioned for the project. A mix of gloss and satin black was used across the bike, in both paint and powder and the seat is covered in oxblood genuine leather.

Now looking absolutely beautiful, it was time to take care of the famous and reliable mechanical package offered in the big GS. With the engine in its own set of boxes, building it back up it was clear a host of parts were missing. And suddenly nobody had stock, forcing a European-wide manhunt over a number of months. “The engine was ﬁnally rebuilt by a mechanic of trust with oversized pistons, a new starter clutch and everything needed to run as good as new. At the end it was painted black, the side covers powder coated, and I made some custom side logo badges.”

An exhaust had been supplied with the bike, but it had some weird angles that left the pipes sitting out a mile from the engine. So the whole thing was cut up and Sérgio used the pieces he could salvage to construct a stunning full system that finishes out in a brushed stainless steel muffler. With the carbs then rebuilt and fitted with bigger jets, some custom embossed filters went on and the big Suzuki was purring like a kitten. A comprehensive re-wire was undertaken, with the company’s own control box hidden under the seat to keep everything neat and reliable.

The suspension is comprised of YSS rear shocks for the rear, while the front end has been rebuilt to suit and fitted with a set of gaiters. The Tokico brake package and standard wheels also got the full rebuild treatment. “To ﬁnish the bike there are some other details like aluminium footpegs, a Daytona speedo, Tomaselli handlebars, a custom side license plate mount and LED bar end turn signals.” Sérgio also fitted up NGK plug caps and Biltwell grips to match the seat and the bike was tested and then shipped back to Paris.

The owner responded with a bunch of photos of him smiling from ear to ear on his all-new GS and thanks to WKND Customs, he’s also got a radical Yamaha XT 600 on the way too; The French really do have all the fun. And it is in projects like this that the famed GS line-up will live on in style.