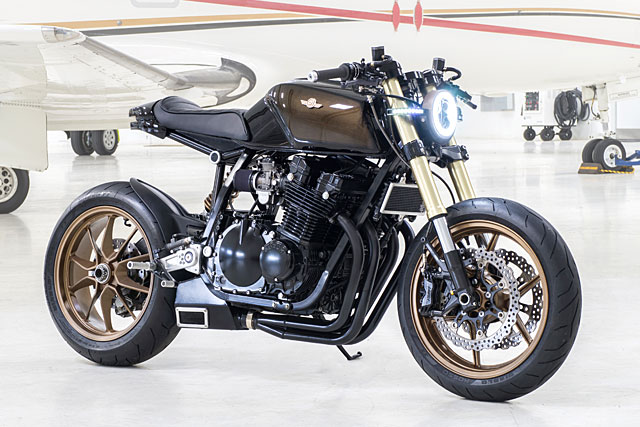 More than a decade ago I watched a team rebuild a 1000+hp Subaru WRX engine in just over 20 mins with the lead mechanic screaming, “just slap it together!” On the very next run it broke its class world record; incredible to observe but not the attitude I hoped the Qantas engineers would adopt for the aircraft flying me home. So when a client with a background in aviation engineering approached KickMoto in Halifax, Nova Scotia, they decided to adopt that meticulous aircraft attitude for the build. The result is KM006 an incredible 1985 Suzuki GS1150 Neo-Racer that’s poised and ready to hit the runway. The client had owned the bike for over a decade riding it plenty and had always wanted to give it the transformation it deserved but a lack of time and the right equipment had held him back. Knowing the bike would be regularly racking up the miles and with the client’s aviation background in mind it gave the KM crew an idea. “We were keen to grab some inspiration from the world of aviation design. In the same way that we modify vintage bikes with a modern take, we wondered what would happen if the same approach was taken to a vintage war bird or fighter plane.” The GS arrived at KickMoto with the clock showing 100,000kms, this was going to be a full frame off rebuild and the engine would need a full overhaul. “After stripping the bike down to the bare essentials we found ourselves with only the engine, header, carburettors and half a chassis. Everything else was either modified or made from scratch after this point.” For the first time in the company’s history they sent the engine out for the rebuild which would free up their time for the extensive transformation that had been planned. With the bare frame on the bench the entire rear end has been redesigned and fabricated and the quality of workmanship is remarkable. The subframe was the first part to get underway with a tall rider requiring a high seat height. But the main challenge was to adapt the Suzuki to accept the asymmetric shock mount required for the planned swingarm conversion. The challenge became one of the crew’s favourite aspects of the build and the top shock mount is neatly secured by a detailed end cap. The bottom mount sits in its original home, a beautiful single sided swingarm from the Italian engineer’s par excellence at Ducati.

With the chassis work complete the old and new was given a coat of hard-wearing black paint and the ‘80s front section merges seamlessly with the custom rear end. Now attention could turn to the front and a great deal of research and design was undertaken to get things just right.

KickMoto were removing plenty of weight but the GS is no feather and so a total front-end conversion from Kawasaki’s similarly sized ZX14 was given the tick of approval. Using their brand-new CNC machine the top triple clamp was the first item produced by the expensive purchase and it was more than worth it the cost. Not only providing a lightweight, high strength item it also allowed for the use of the ZX14 bars in a flipped position and a recess for the speedo to come. The rolling chassis was now totally transformed and like nothing from 1985, but in many ways the work had only just begun. Starting the visual changes at the front, “Our headlight design was inspired by the front elevation of a single engine prop driven fighter aircraft of WWII.” But execution is all 21st century with no less than six individually CNC’d components required to create the stunning look. The seamlessly integrated turn signals have been especially wired to work with the LED halo as running lights, while the main light is a round projector style 5 3/4″ unit. Now totally in sync with their CNC machine and software the party rolled on.

The gas cap is an incredible piece on its own but it also packs a party trick just in case you need be further impressed. Press a tiny button hidden out of sight but in easy reach of the rider and the cap illuminates bringing the machined piece to life. It must be one of the most labour-intensive fillers ever created with a combination of lathe work, CNC machining, 3D modelling and 3D printing with stainless steel all required to produce the part. The team even created an all new logo for the bike that is applied to the sides of the tank and gas cap and draws heavily on the aviation theme. There’s a backwards ‘K’ and ‘M’ surrounded by a wing style emblem derived from vintage horizon gauges once found in various fighter jets. Moving further rearward and sitting atop the custom subframe is the all new tail section and seat. Back to traditional methods and hand formed sheet metal was used to create the tail-piece from two sections with a very purposeful gap left between the two. Inside the recess sits an LED taillight that is held in place by aluminium trim that further helps to radiate the light. The seat itself is generously padded extending onto the tank for extra comfort.

The paint job couldn’t let the bike down and the KM crew tell the story best, “We went back and forth on this one for a while, the client really wanted a lot of black, but don’t they all. We really wanted to do something that would just set it apart from a lot of bikes out there. We decided on the wheel colour first and used that as the driving force of the scheme. The wheels, headlight ring, and shock spring were all coated in a triple bronze with a satin clear. The body work was all painted black with a copper and bronze combination added to it. At the front of the tank we knew we wanted to break it up a bit here with a panel. Our painter suggested we do the panel in a bronze colour as well but keeping it pretty subtle”

The finished product looks a million dollars, but it would count for nothing if the Suzuki engine couldn’t handle the abuse the owner planned to throw at it. Engine builder Colin Walker gave it everything with a full rebuild that included new pistons and rings as well as a mild cam swap. The carbs have been rebuilt and jetted for the exhaust change to come and now draw air through a set of black Uni filters. The client had wanted a high mount muffler but the addition of the Ducati swingarm changed all that, now there was a void to fill. That space is brilliantly complimented with a box section muffler that mirrors the shape of the tyre and vents out of perforated plates with CNC trim. Now they just needed to make the rider feel at home, with the first step a set of machined rearset adapters to allow the tall owner a perfect level of comfort. Up on the bars are a pair of Rizoma reservoirs and the 3-button switches are part of the Motogadget party pack. An m-Unit controls the show and a pro scope gauge sits in the previously recessed triple clamp for a perfect fit. There is an m.lock with RFID technology for 007 style keyless ignition and a Dyna 200 CDI digital system ensures even the engine fires with the latest technology.

Dressed in leather by Pagnol next to a private jet in a cleaner than your kitchen hanger it’s hard to imagine this GS was once a well-used banger. But set KickMoto a challenge and even an ‘80s Suzuki showing a 100,000km can be transformed into an aircraft precision Neo-Racer for the owner who wants it all.