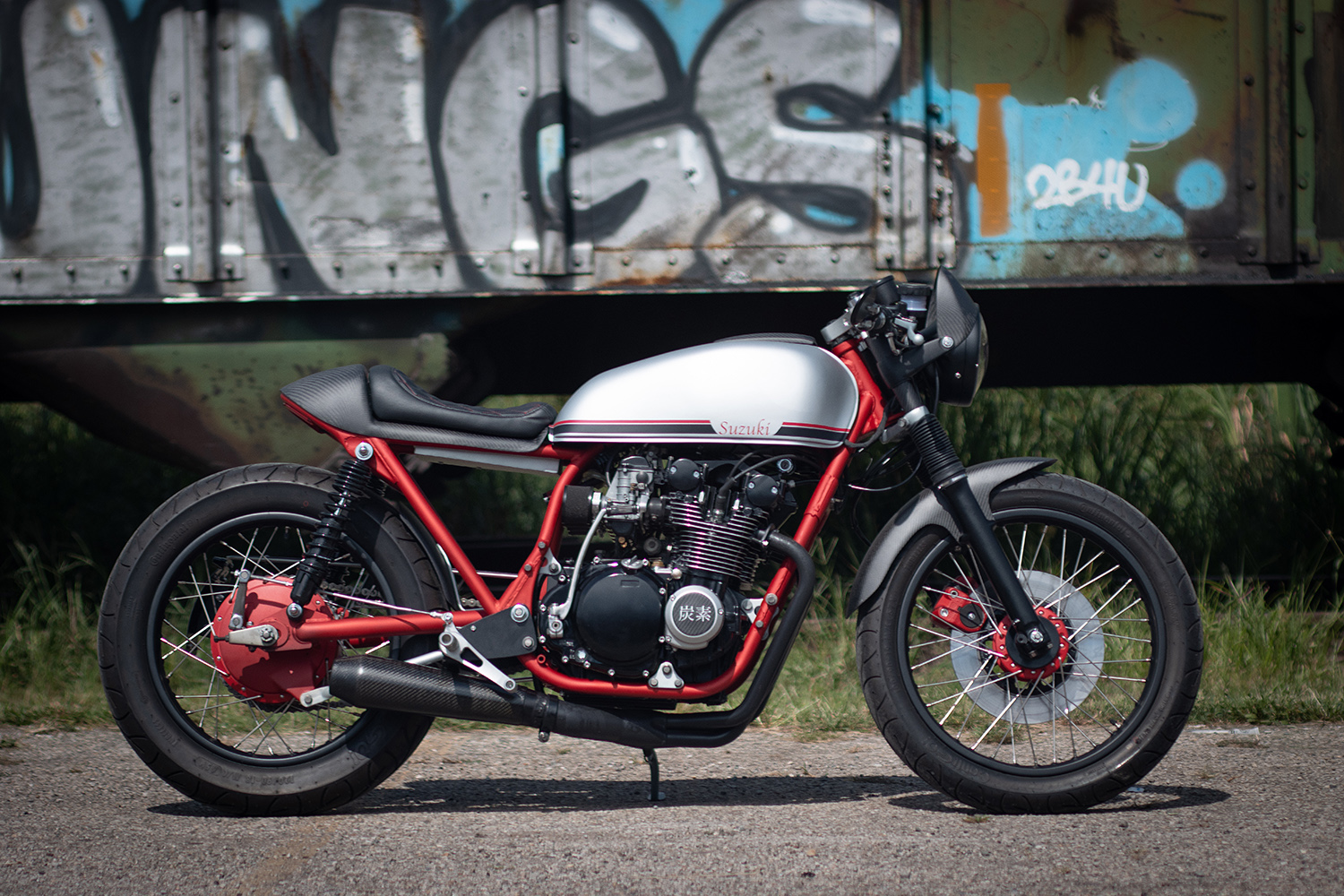 ‘A good marriage isn’t something you find. It’s something you make, and you have to keep on making it.’ The same can be said for a great custom build, often found as a disaster, but with the same level of love, commitment and hard work, you shape together something that will enrich your life forever. Happily living the dream in Cincinnati, Ohio, Mike Mitchum has found both, sharing his life and love of motorcycles with his amazing wife. Not only does she ride, but she also let him turn their garage into a workshop, and it’s there in his spare time that he’s hand-built this stunning carbon-clad 1977 Suzuki GS550 Cafe Racer called ‘Tanso’.

Having learned many mechanical skills growing up from his grandad, uncles and step-father, Mike now spends his days making a quid as an IT director and lives  “with my lovely wife who rides a 2011 Suzuki Boulevard S40. That was my first bike and she learned to ride once I upgraded to a bigger bike. My daily rider is a 2016 Yamaha XSR900. This meant that I didn’t have to be in any particular hurry in getting this bike done. My wife has been gracious enough to let me turn our two-car garage into a workshop and I feel very fortunate to have so much room in which to work. Her only request was that I leave room to put her car inside at night.”

Seems more than reasonable! What wasn’t so reasonable was the condition of the Suzuki GS550 when Mike picked it up. “The bike was purchased as a non-running disaster and was transformed over the course of just under 3 years.” With room in which to work he stripped the bike down and summoning the skills he’d learned as a youngster, he treated the engine of his first-ever custom build to a full overhaul. “I refreshed the top-end of the engine. It has new piston rings, gaskets, honed cylinders, and I swapped out shims to give it a valve adjustment.”

The engine looks the part too, having been totally transformed with all new paint, plated bolts, and custom covers made from carbon fibre. On the intake side there is a set of completely overhauled carbs with pod filters and the exhaust is a 4 into 1 setup that exits out of a carbon rear muffler. At this point you’ve probably started to see the number of carbon fibre parts add up and are wondering where you can buy them for your own Suzuki, well you can’t! That’s because Mike made every last one himself in his garage.

“I forget what started me on the carbon fibre path, but I’ve always been drawn to the pattern of the weave and the technical aspect of the composite material. I watched a ton of YouTube videos to get an idea of how to do wet layups, vacuum bagging, mould creation, and more. From there it was a matter of trial and error,” he explains. From the tyre hugging front fender to that absolutely stunning rear hugger with custom bracket, it’s all Mike’s handiwork. The normally dull chain guard is now a cool as can be custom piece and even the number plate hanger is carbon.

There would be more of the fancy material in the visual side of the build, but first he had the cleaned up frame, swingarm and hubs powder coated red, one of only two jobs on the entire build he didn’t do himself. That frame features a hooped out rear end on a shortened subframe that is the host for the all new seat. The very cafe racer style is all lightweight carbon that looks mega, topped in a custom upholstered seat with slick diamond stitching and red insert.

The front cowl is carbon too and now Mike was ready to get on with the metalwork. The tank is absolutely arrow straight and the paint scheme is perfectly restrained with silver the primary colour with red and black accents. The minimalist logos keep the theme going, with Suzuki spelled out on the tank and one engine cover, and ‘Tanso’ meaning carbon in Japanese, laid out in Kanji script. More quality metal comes in the CNC machined form, with a sweet Cognito Moto top triple clamp and rearset combo.

Finally, like all bikes that start out as a rotten disaster donor, Mike’s needed a total re-wire and he’s left no stone unturned. The brains of the job is a Motogadget m.unit Blue, with the company’s excellent switchgear joining the party. The engine side of things gets a major upgrade too, with Dyna coils and electronic ignition, and a Rick’s Electric stator and reg/rec. An Antigravity battery under the seat, CRG mirrors and quality Continental tires, and Mike was ready to roll.

But as he always does in life, he has his wonderful wife riding by his side, and we have a feeling this won’t be the last carbon cool cafe racer we see out of their garage.