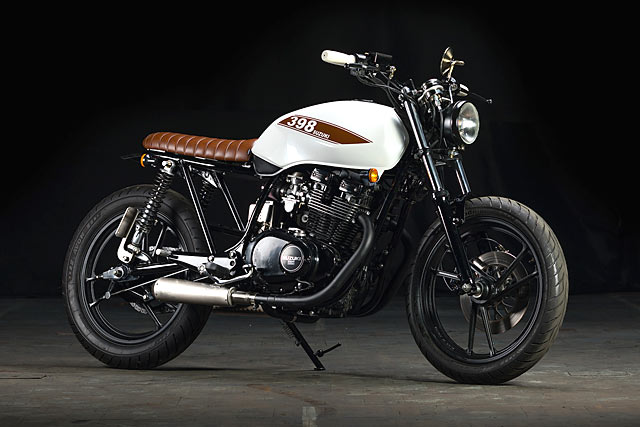 ‘Dad Bod’, as you will probably know, is a slang term referring to a body shape particular to middle-aged men. Think of it as a shape that’s not trying too hard, but still looks pretty damn good. El Andrej, the Slovenian builder of this cool little Suzuki GSX400 brat may or may not have one, but he is the proud owner of some killer Dad Mod skills. Got a bike, a garage and a young family? Then maybe you could hone your own Dad Mod skills and knock one out of the park like this. “I live in the Ljubljana suburbs,” says El. “I am a mechanical engineer by trade and I’ve been in love with motorcycles from back when my memories can reach,” he says, poetically. “For daily use I have a Ducati Monster S2R 1000 and my shop is currently my house’s garage in the evenings when my two incredible daughters have fallen asleep. I believe that this motorcycle is a first step to me making many more custom bikes in the future”. For his first build, El’s requirements were pretty simple. He wanted something cheap with a twin cylinder engine. Hello 1983 Suzuki GSX400E. “I found it for a couple of hundred Euro on the internet; the engine was ok, but the electricals were really poor. Also many of the parts, including the gas tank, were totally rusted. Clearly the bike had stood outside for many years”. And it smelt, too; El’s girlfriend apparently avoided the garage until the de-stinking work began. “I always had dreamt of buying an old motorcycle and customising it. I think that my inspiration has lived inside of me for my whole life. During the creative process, I tried to make sure that other styles and designs didn’t have too much influence on my ideas. I wanted the bike to reflect me, my mechanical skills and my love for motorcycles. But I was listening to a lot of rock at the time…” Being a brat of sorts, the first thing El attended to was the seat. “I mocked up what I had in my head and it was just the right length. Then I cut the frame, reinforced it and made a loop to complete the seat line. Next, an old Harley fender was cut, flattened and welded directly on to the frame”.

Wanting the under seat area to be clean and clear, the airbox was replaced by two K&N filters sitting on some freshly rebuilt carburettors. Then a new battery box was made and the bike was rewired from scratch. “From the handlebars to the rear fender, there is no visible wiring at all”. A completely new control panel was made up from two laser-cut plates; the lower one hides the workings and makes for a nice edge from the front. Next, El replaced the handlebars and chose a brass mirror which adds a little visual spice to the bike while also echoing some other brass details. Amal handgrips were chosen to match the seat and gas tank. “I lowered the bike at the front and made it a little higher at the back; the new riding position and reduced weight make it great fun to ride. To keep the project’s costs down, I the kept original wheels, brakes, suspension and gas tank and renovated them instead of replacing them. For the front indicators, I added some brackets directly to the tank’s bottom edge; I haven’t seen it before and I’m really happy with the results”. The bike’s cans and paintwork were the main tests of El’s patience. The mufflers were hand-built and are truly unique. “The sound is really awesome now; deep and loud,” says El. The paintwork was done with the help of a friend; the intention here was to honour the original lines and era of the Suzuki, but to also create something that works with the bike’s new look. The brown stripes and typography on the tank are all painted, not decals. “Honestly, I love everything on it,” concludes El. “When I bought this Suzuki, I didn’t want to make something too popular that everyone had seen 1000 times, but rather a bike which was unique and a challenge to customise. It took a lot of evenings outside the house in the cold, but it was worth of every second. That’s the best thing – I had a really great time building it. Thank god I have a full face helmet; if people could see my face when I’m riding they’d probably think I was crazy”.