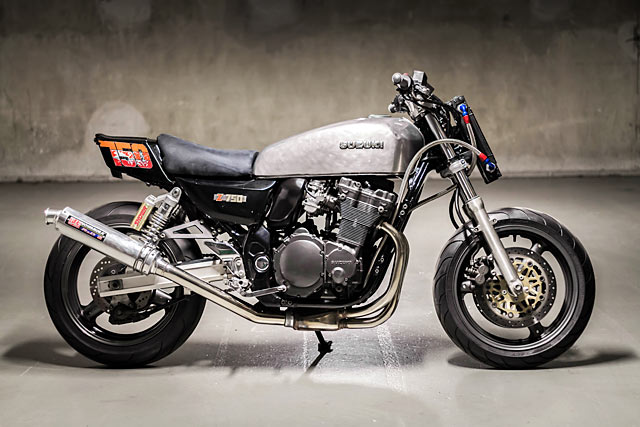 Ostentatious oil coolers have been a stock-in-trade item for Japanese car customisers for decades. Lifted from racing car stylings of the 70s and 80s, the more ridiculous its placement and the route the oil lines take, the more street cred the cars seem to have. Now an essential part of the Japanese ‘Shakotan’ style, it’s part of a plethora of cool custom ideas developed in Japan since the dawn of time. But has it ever been attempted on a custom bike? Well, it has now. Meet the ‘Zumax’ Suzuki GSX750 racer from France’s Banb Motorcycles. 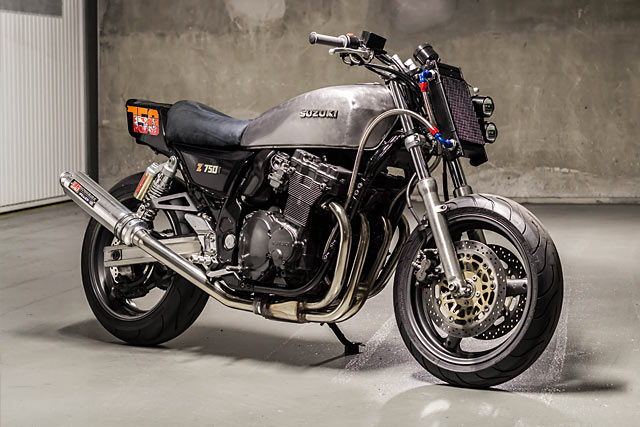 Shop owner Alban Jaunay works as a freelance product designer in Marseille, in the south of France. He’d been thinking of building himself a custom motorbike for a few years, but he really got serious after he went with his girlfriend to the Café Racer Festival near Paris. “While we were there she asked me, ‘Why don’t you build yourself a custom bike like these? I’d rather see you spending hours wrenching on a bike than browsing Pipeburn.’ And so it began. This is the point in my life where my passion for creation and motorbikes would become a reality. So, I launched my own custom motorbike workshop. I call it Banb Motorcycles.”

[superquote]“Why don’t you build yourself a custom bike? I’d rather see you spending hours wrenching on a bike than browsing Pipeburn.”[/superquote] 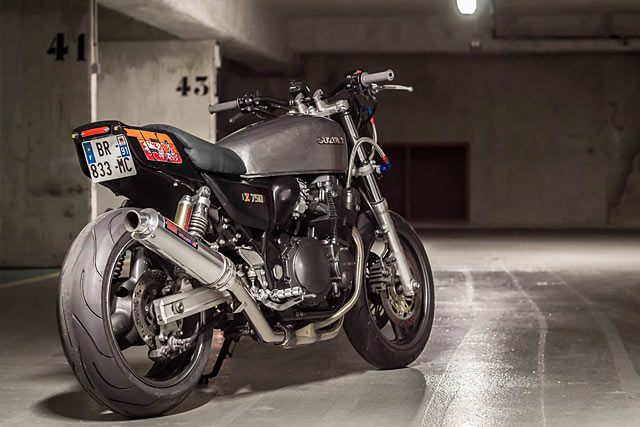 Blurring genres, Alban tells us that he considers the bike to be a cafe racer, probably thanks to the fact he’s stripped it to make it go faster. But we’re also seeing touches of ‘80s endurance racers and even a little rat style. What a killer combo. “The donor was in fact a ‘99 Suzuki GSX750 Inazuma. Ironically, I bought it from a guy who bought it to create a custom bike, but he never really had the time to start. Then the R nineT Scrambler came out, and it was very close to the custom bike of his dreams, so he decided to buy the BMW and sell the Inazuma. I was lucky, as it was still in very good condition.” 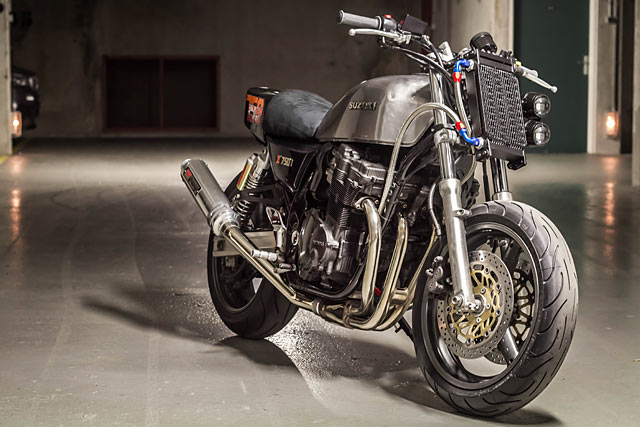 And what about the name, ‘Zumax’? We’re glad you asked. “Probably thanks to the bare metal, the patina finish and the placement of the oil cooler, everybody asks me if it is a bike that was inspired by the Mad Max movies, so I named it ‘Zumax’ – a shortened version of Inazuma Max.” Mad Max influenced, you say? You won’t hear any complaints from us, then.

“I was born in Le Mans,” smiles Al. “I have always loved going to events like the MotoGP or the 24 Hour events, so naturally my inspiration comes from the racing world. I like the mix of simplicity and brutality you see in racing machines; I think there is a real elegance to them. With its twin shocks, the big inline four and the tube frame, the Inazuma was a perfect choice to create an interpretation of the US Superbike series from the 80’s. My main goal was to give it a stripped down and racy look, very much like the bikes from Racefit Exhausts.” 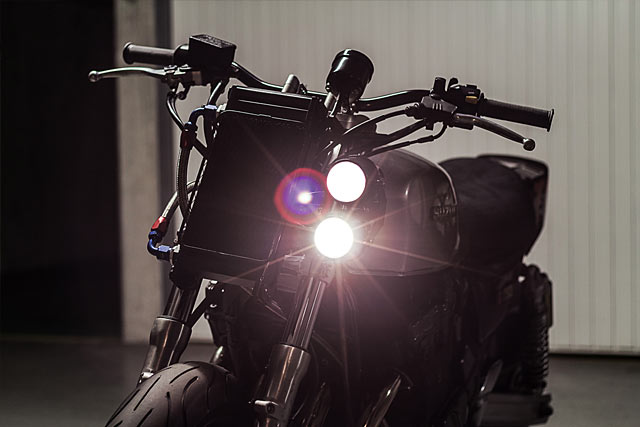 The build started with a rusted gas tank from a Suzuki GS1000. “I had to adapt it to the frame, clean it and coat the inside with resin. The outside has been sanded and clear coated to show the bare steel. I wanted the oil cooler to hang at the very front of the bike, as with some superbikes I took my inspiration from. The big round headlight has been removed and a Setrab racing oil cooler with Goodridge braided lines took its place. Then, two smaller lenticular lights were hung on its side. Also, the set of factory instruments has been replaced by a much simpler Koso tachometer.”

After deftly relocating part of the wiring harness under the tank, a set of wide and low LSL handlebars were adorned with Progrip’s finest and bolted on. “At the other end of the bike, I cut the subframe and installed the rear and side fairings from an ‘82 Kawasaki Z750. I kept their decals and emblems as a kind of nod to the actual engine capacity of the bike. The standard seat was then modified to make it a single-seater. The small rear lights and turn signals were integrated in the rear fairing and the battery case was transformed to tidy up the rear a little bit.” Lastly, Al swapped out the muffler for a very tasty Yoshimura R&D number. 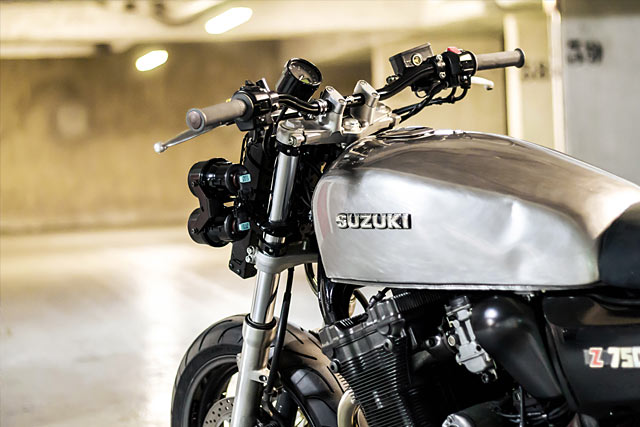 Al says that the real key to the project was getting the tank right. “I had almost no equipment, no workshop and it was my first build. I really didn’t know if I was going to be able to do it. It took me forever to reshape the underside to adapt it to the frame. Then the fuel petcock was in the way of the airbox. I quickly learned how much work is needed to customize a motorbike. Sanding it in the living room of the apartment was also a great moment. It is the only part of the bike where I needed some help; a big thank you to my dad and my friend Steven.” 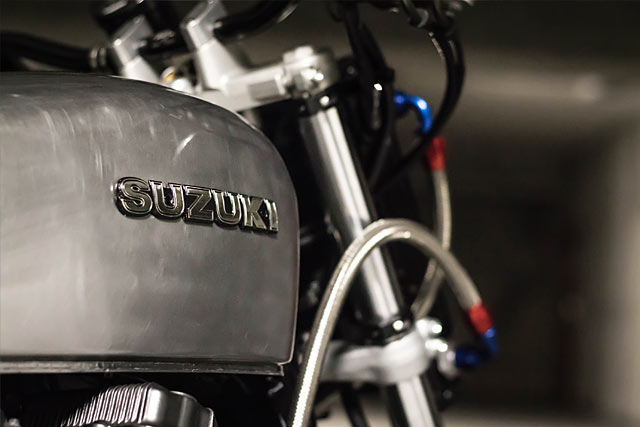 No surprises, then, that the tank is also Alban’s favourite part on the finished bike. “I love the look of the bare steel. Steven did an amazing job coating it. Its shape also transforms the look of the bike. Going from the roundish standard tank to the sleeker one from the GS1000 makes the bike much more elegant. It’s a good reference to the racing superbikes of Wes Cooley.” Al also takes time to call out that Setrab oil cooler.“ I love this kind of overtly racy part. It gives the bike a very aggressive look.” Long live Shakotan!