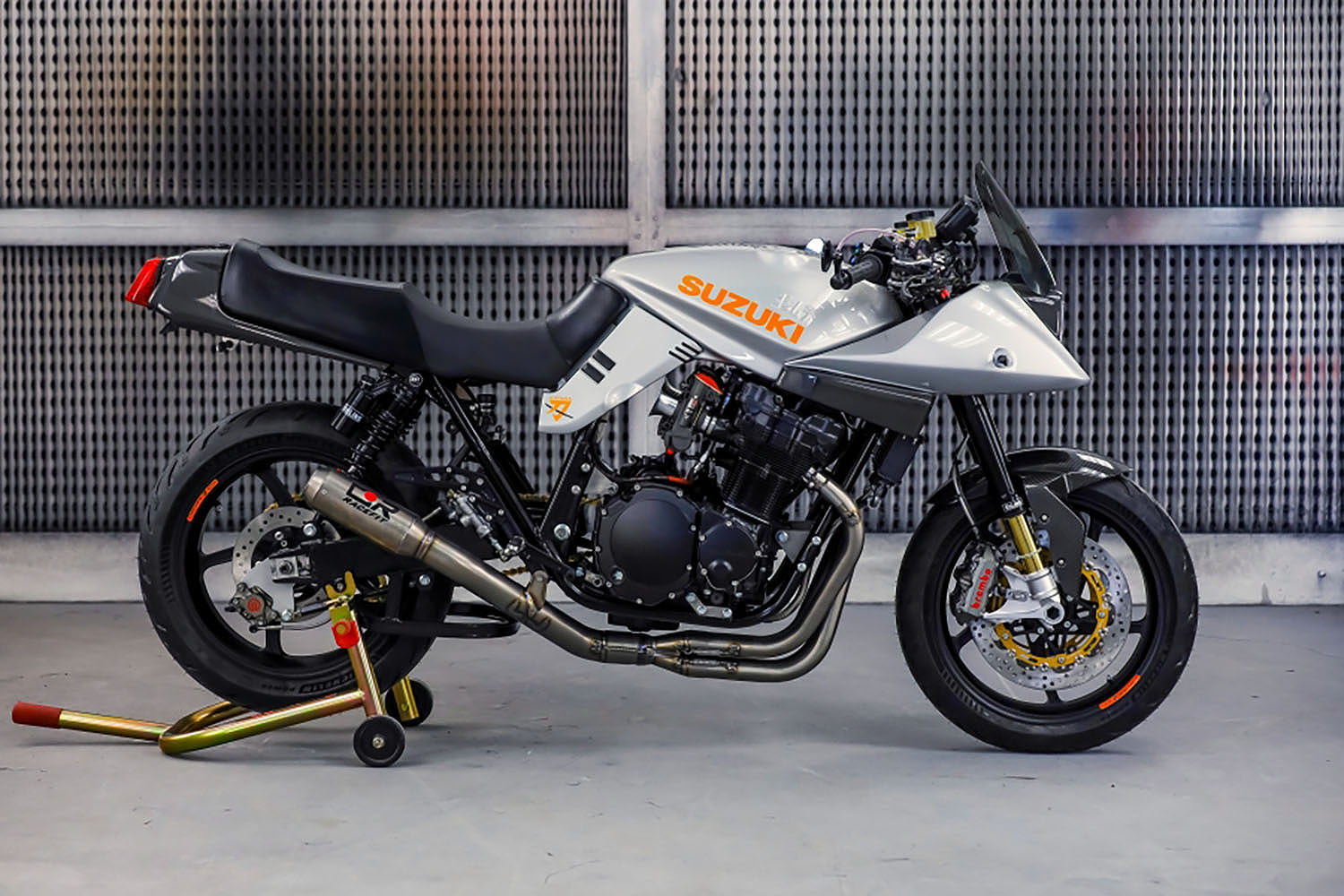 The resto-mod scene is booming and while the four-wheeled variety has almost become mainstream with the likes of Singer and the SEMA dominating Ring Brothers to name just a few, the two-wheeled world is really just getting into top gear. Outside of Japan, one man has built a reputation as the go-to builder in North America, with an eye for bringing the best classics of the ’70s and ’80s into the 21st century with a boom. Darren Begg Customs churns out one brilliant bike after another, balancing old and new to perfection, and his latest creation is this killer Katana that’s ready to slice and dice the Big Apple.

We’ve said it before and we’ll say it again, as cool as a modern superbike is with 200bhp on tap, trick electronic suspension, and state of the art six axis IMUs, there is one big problem; they basically all look exactly the same! You also can’t accelerate hard in more than 1st gear without breaking the speed limit and they’re about as comfortable as a trip to a proctologist with large hands. So not only does a resto-mod start to make much more sense from a usability standpoint but who doesn’t love to roll down memory lane, get all nostalgic and reminisce about how great the bikes were “when I was a boy.”

Truth be told, that’s a bit of a lie too, for one the brakes and suspension are so inferior to the modern offerings that it’s almost scary. Here too the resto-mod makes another claim for being an excellent choice, but it’s not as easy as it looks. Darren Begg would know, he’s transformed most of the sportbikes from 40 years ago into rip-roaring rockets and cracked the formula to get the best of both worlds. This particular Katana was sent up to Darren in Canada by a client from New York, who had seen his work and clearly wanted a classic Suzuki that packed serious sizzle in the engine department.

Keen observers will have already noticed the change, with the stock Katana lump tossed aside for the bigger capacity and more powerful 1127cc engine from a GSX-R 1100. Not only do these engines deliver 130bhp in stock trim, but they punch hard from low rpm, making them excellent for street use. But Darren wasn’t just going to leave it there, so the engine was cracked open and given a major upgrade. The bottom end has been rebuilt and the bores opened up to accept a set of Wiseco pistons that take capacity out to 1216cc. The cylinder head has been given an Xtreme Motorsport workover and fitted up with Megacycle cams.

Now you have an engine that has the strength, capacity, and ability to flow air in the quest for making serious grunt. All of which is even more impressive when you consider there is no water-cooling. So, to stop the oil boiling away to nothing, a big Sebtrab oil cooler has been fitted with custom lines, and you’ll notice the core is significantly thicker than just about any other equivalent cooler on the market. With all of that swept capacity to feed, Darren opted for a bank of Yoshi TMR-MJN carbs complete with machined velocity and a Race Fit full titanium exhaust finishes out the package.

To get the handling up to scratch the first task was to ditch the stock swingarm and slot in a custom converted and braced unit from a Suzuki Bandit. But the traditional twin shock setup remains true to the original, only now with a set of black Ohlins dampers taking charge. At the front end, a custom machined set of triple clamps holds Ohlins USA adjustable forks, with the lower legs equipped to run a set of Brembo radial calipers with big twin discs to clamp. A wheel speed sensor hints at some electronic trickery onboard, while the rear brake is a race-inspired underslung Brembo.

Wheel choice is crucial on a resto-mod bike, with the suspension dictating a change away from standard unless you want to play with custom axles etc. Here Darren has chosen the middle ground and the one best suited to both performance and style, with lightweight Oz Racing rims wrapped in Michelin rubber. Over the front runs the first of the carbon parts, with a tight hugging front fender joined by carbon intake winglets and a carbon headlight surround. The tail unit is of the same construction, although in very traditional Katana lines, and the tank, fairing, and side panels complete the classic look.

Sketchs Ink was responsible for laying down the stunning silver paintwork, and rather than take the easy way out and use stick-on graphics, they’re instead painted on in a Lamborghini orange. The final fit-out is all class, with items like the Woodcraft billet switches, Brembo master and lever combos, and the Koso instrument cluster ensuring that the owner has only the best with which to play.

But ultimately, it’s the finished product that steals the show, it looks as good as any Katana on the road, with that lethal aesthetic still impossible to ignore. But twist the throttle and a whole new beast comes to life, as dB customs turns up the volume on another blistering performance package.