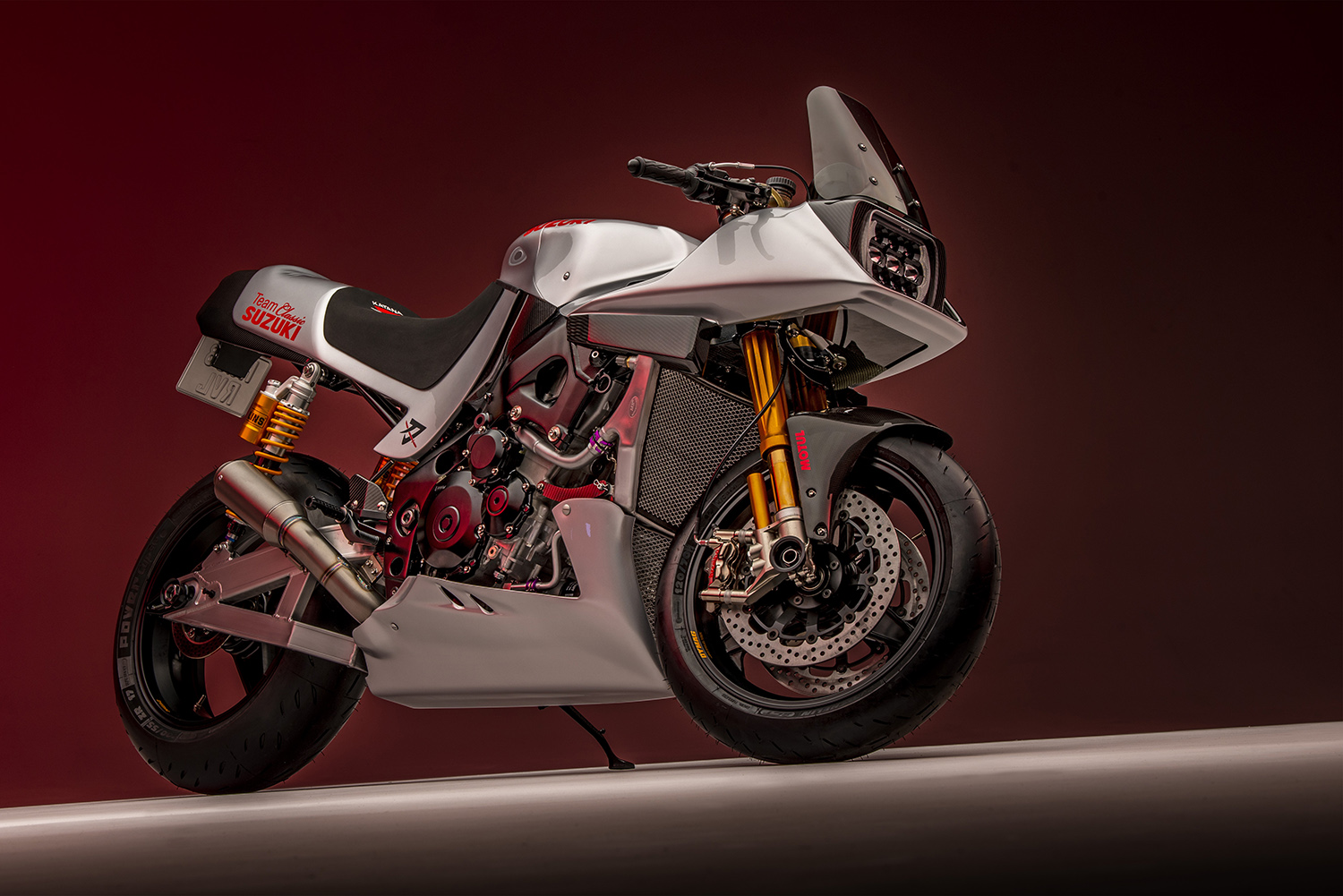 It might be called Covid-19, but it was the year 2020 that took a hit for the whole globe, as everyone did their best to stay safe and sane. With downtime on their hands the guys at Team Classic Suzuki weren’t going to let it go to waste and with most races cancelled for the season they collectively asked themselves, ‘what if?’. The answer to that question; the ultimate Suzuki Katana for the road. Jam-packed with a genuine World Superbike engine, components from their racing program, and the best suppliers on the planet, all wrapped up in one stunning package. This is what happens when race bike mechanics get access to the candy store, a Killer Katana that will cut up every other bike on the road.

Previously the team had built a Katana for the European Classic Endurance Championship, scoring a class win at Oschersleben in Germany. So, they have plenty of experience with the legendary model and being sponsored by Suzuki’s Vintage Parts programme means they have access to all the goodies. The program is a brilliant concept, allowing enthusiasts access to brand new parts to keep their classic and vintage Suzuki’s on the road. Need a new conrod for your RGV250 or a water pump for your ’71 ‘Water Buffalo’, they’ve got you covered. So with access to almost everything you could ever desire, the lads jumped headfirst into the project.

“At the heart is a 2008 world superbike-spec engine from an Alstare GSX-R1000, fully refreshed by Team Classic Suzuki’s Nathan Colombi; putting out around 200bhp at the rear wheel.” Yes, that is a genuine race engine that powered both Fonsi Nieto and Max Neukirchner to wins in the ’08 season, arguably the greatest field of riders ever assembled for a season of WSBK. To keep everything cool is a full spec radiator and oil-cooler with aluminium pipework. With the sound rumbling from the beast courtesy of Alstare world superbike headers, mated to a Racefit link pipe and end can.

“She’s stock officer, all the parts are from the Suzuki factory!” Allowing the team to take control of the monster motor is a Yoshimura EM Pro kit management system. Now, they needed to find the engine a home. Based on the dimensions of a road-going K8 GSX-R1000, is an Alstare frame from the 2008 championship year, with all of the little custom touches and tweaks you get from such an experienced racing outfit. Slotted into the rear is one incredibly special swingarm from Alpha Performance Fabrications. Bigger and yet lighter than a stock unit, it is one of the most important parts of any racing motorcycle and was crafted to pay homage to the original Katana piece.

The guys at Alpha also built the custom subframe for the project and like the swingarm, they are designed for a twin shock setup, again just like those original Katana’s. Front and rear the full suite of suspension components come from Ohlins, the supplier to just about every race team on the planet. Although we’re guessing the boys have tamed down the dampening a little for the street. Braking is all the best bits that Italian firm Brembo sent over, superior to even that fitted to the Alstare race machines. “The rear caliper slots discreetly in between the swingarm and wheel for a cleaner look to the rear end.”

For wheels you simply must go lightweight and Dymag CH3 magnesium items maintain a classic look, and are the same wheels found on Team Classic Suzuki’s XR69 replica machines. These are wrapped in road-legal yet very track friendly Michelin Power Cup Evo tyres, a 120 at the front and a huge 200 section at the rear to tame all that power. But making power needs lots of fuel and to feed the hungry beast is a WSBK fuel tank. The bodywork over the top starts with the seat that is from Team Classic Suzuki’s own Katana program, modified to fit the big tank.

The nose cone is a new old stock Katana unit, available from Suzuki’s Vintage Parts Programme, which has been widened by one inch and modified to fit. Moulds from the nose and seat unit were used to create carbon panels that add a finishing touch. Above the front tyre is more carbon in the form of a fender before your eyes rise again to see the classic Katana screen with a stunning carbon fibre surrounded LED headlight unit. Also cleaning up the rear end is a slim LED taillight fitted to the seat, and yes folks, that is a number plate! Then it was out with the spray gun for gloss silver with red decals, simple and yet stunning.

Racefastener’s supplied a lot of the fittings and then the good folks at Italian supplier Race Seats finished out a sleek and comfortable unit with a Katana logo. Custom alloy rearsets and clip-ons were designed and built in-house, with a single instrument taking care of the last piece of the puzzle. The end result is simply mouth-watering, the original lines of the Katana are retained with that groundbreaking silhouette present from all angles. And yet, underneath that bodywork is a full-on world superbike, with a tyre shredding 200bhp just a twist of the throttle away and all of the best suspension and brakes to keep it under some sort of control. I’m selling a kidney if anyone’s asking!