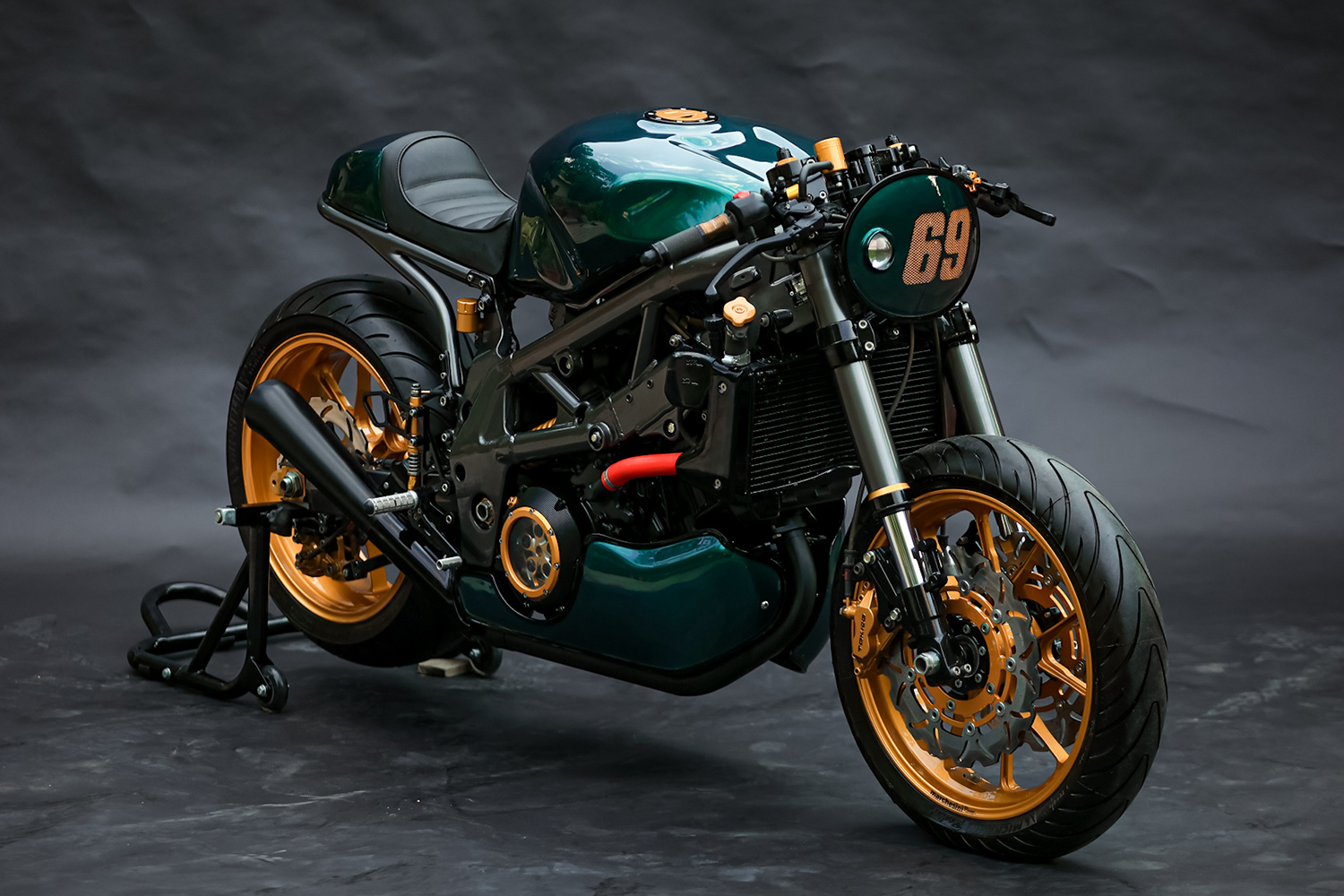 A number of motorcycles over the years have earned the nickname “The Widow Maker”, machines that will allegedly launch you into the nearest roadside tree at the twist of the throttle. The original Kawasaki H2 wore the name almost as a badge of honour, big power, and a junk chassis, but it was the Suzuki TL1000S that had motoring journalists predicting disaster, lawyers counting their cash and the Japanese company issuing recalls. Now decades on and the late ’90s bad boy has become somewhat of a cult hit, and our friends at Rajputana Customs have tamed the beast and given it a slick and sporty modern maker over.

With the success of Ducati’s L-Twin sportbikes and Honda showing a new commitment to the V-Twin in increasingly pepp’d up packages, Suzuki decided they needed a powerful 90° twin of their own and set about development. Seems they spent all of the time on the engine, as it was and is a blinder, the problem is the chassis and suspension package was an afterthought. The TL1000S came to market with a rotary style rear damper, separate rear spring and steep steering geometry. And those early journalists who got to test one on a smooth as silk track knew disaster awaited on the open road.

The engine really wasn’t as brutal in its power delivery as people made out, the real problem was the crap rear damper cooked its oil, hoisted the front end and when it came crashing down the front shook its head so violently it was uncontrollable; Suzuki recalled the bikes, fitted a steering damper and turned down the power, but the damage had been done. Now the short-lived model is making a comeback and some clever solutions are making maximum use of that beautiful power plant. For this example, Vijay and the crew have totally transformed the TL and given it an all new nickname.

“The original TL1000S being a sports bike had a very retro look, whereas our customised ‘Mama’s Boy’ retains the racing vibe, yet having a very modern sporty look.” That process starts with the frame that has been completely cleaned up, a neat new rear subframe built much stronger than the often cracking original, and then coated in a tasty metallic grey. The half-faired bodywork that was a direct attempt to mimic the Ducati SS has been removed and instead a new belly pan perfectly formed to frame the big twin-cylinder lump.

The front itself now wears a small mask made from a number plate board that sports a grilled-out number and a single LED headlight to shine the way. Then the rear is given the most traditional look seen on the bike with a custom ‘cafe’ style rear hump that leaves plenty of room for the hand-stitched leather seat, which allows the rider to really slot into the machine. Out with the spray gun and the tins are flowed with a sumptuous sea green metallic that transforms the look of the bike on its own and is brilliantly offset with a tasteful use of gold across a number of components.

Nowhere do you see more of that precious metal hue than on the ultra-lightweight Marchesini wheels that help reduce some of the unsprung weight that caused part of the steering issue of the TL. Some grippy Michelin rubber also helps the cause, but it’s the rear suspension work that makes the big difference. Many companies have found solutions and one is fitted to this very machine, a shock from another sportsbike like an R1 is stripped of its spring and its damper used in place of the horrible rotary unit, with the stock spring then left in place on the right side.

The front end is rebuilt too, with adjustments making the handling that much more confidence-inspiring. Should things go wrong, however, a new brake package has been fitted up with a set of wave pattern rotors front and rear, and a new Brembo master cylinder for a better feel at the lever. The stock pegs were known to rust, even when near new, so another change is a switch to machined billet rear-sets, and colour matched grips to finish out the job.That engine isn’t forgotten either, with the thumping twin given a refresh and then coated in all new heatproof paint.

To help see the inner workings, a new clutch and machined pressure plate are visible through a clear cover conversion. And then it’s time for more power, with an ultra-clean exhaust system, that also helps shed weight, spitting out of a GP style muffler to the rear. The cooling has been upgraded with a new radiator and hoses and finally, the beautiful beast is ready to be enjoyed.

It’s a stunning conversion of an infamous machine and now thanks to RCM, the owner can enjoy its power in style, without the need for upping his life insurance policy or worrying the wife.