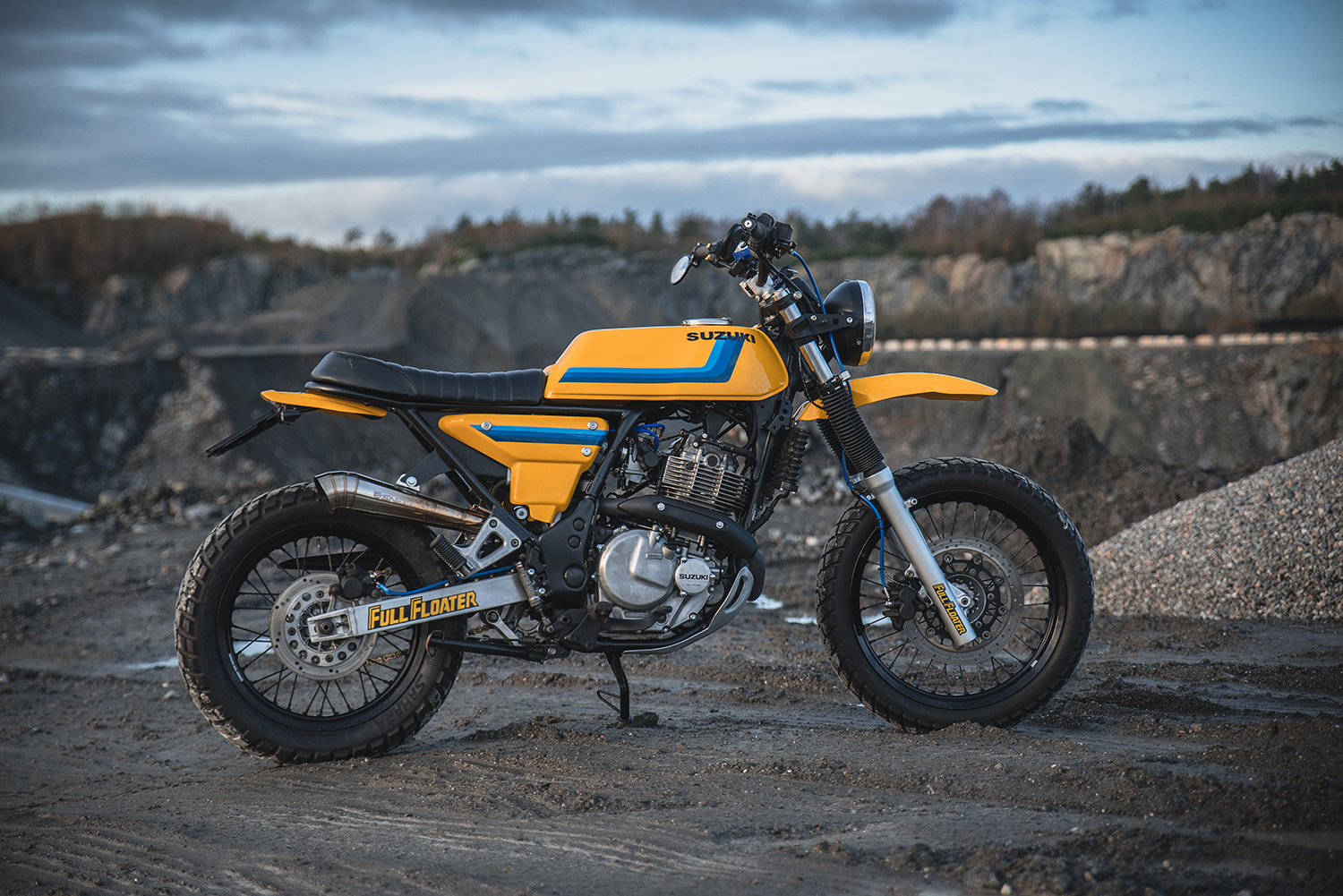 When a new motorcycle fails to sell and is soon pulled from production, it’s usually the case that the manufacturer simply missed the mark! But aside from its questionable name, the Suzuki Freewind, first launched in 1997 was an excellent machine at a bargain price and yet it sat idle on the showroom floor until they were discontinued and sold off for next to nothing. One Suzuki dealer said, “they were ahead of their time”. But one man who had his timing spot on is Swedish bike freak Peter Aldby who was on the hunt for a Honda Dominator as a project bike when he stumbled across the few and far between Freewind. And as luck would have it, the bike was recently finished from a full custom build into a sweet stylish Suzuki Scrambler.

Peter hails from the beautiful city of Gothenburg and has been a biker all his life, with a love of sports bikes, riding fast and doing the odd track day. But with insurance premiums becoming a killer he looked for another way to find his two-wheeled thrills and the cruiser market kept him happy for a while. But browsing the net, he couldn’t help but be taken by the ever-growing number of incredible customs and decided it was time for one of his own. “And so my dream was to build some sort of scrambler based on something like a Honda Dominator, and it was while browsing the ads for a suitable donor that I came across this Suzuki Freewind.”

The Suzuki hadn’t been on his radar, it’s never been on many peoples, but the completed custom looked amazing and it seemed like the donor machine was an underappreciated legend. Just ask Australian ex-racer, team boss and multiple dealership owner Mal McConnell who was tasked with selling them new but seemed to be one of only a few to see just how good the Freewind was. “I love the thing, it does everything. I pillion on it all the time and I do overnighters via backroads. It’s a great back-roads tourer available at a budget price.”

When Peter saw the bike for sale he quickly sold his cruiser and “after a 3-hour train trip and a 4-hour ride that took me all the way around Sweden’s largest lake I made it home with my new bike, fingers frozen stiff.” So, just what did professional builder and painter Henrik W do to transform the Suzuki into a machine that could instantly capture hearts in a way the original never did? The first step for him was to pull the futuristic bodywork off and take a look at what was beneath. There lay a relatively basic chassis, dual sport tuned suspension and the engine from the ever-popular DR650.

The frame is not the same as the DR and is designed to allow the bike to sit lower to the ground, making it perfect for a scrambler conversion. So Henrik began by lopping off all of the old bodywork tabs, repairing the stock bash plate and smoothing out the swingarm. Next, he cut back the stock subframe and fabricated a new hooped unit, before giving the whole chassis a hit of fresh black paint. Now he had the perfect base to start the rest of the build and to keep things clean he knocked up a new battery box to hide the small power unit and some of the other unsightly electrical components.

The bodywork was next on the list and the plan was to take things back to an earlier time when Suzuki’s dirt machines ruled the roost. To do that a detour was made to the Yamaha catalogue and a tank from a ’79 RD125 fits perfectly over the frame. The unique side covers too come from the Iwata factory, with an FS1 providing the pieces that are deliberately bolted on in reverse to get the desired look. More of the motocross influence can be seen with the slightly cut down and high-mounted front fender, while the rear unit is a heavily chopped item to give just enough protection on the rocky roads.

“After all this was assembled the whole thing was covered in Suzuki’s glorious banana-yellow found on their eighties dirt bikes like the RM-series. The RM’s also provided the inspiration for the graphics,” Peter smiles. The timeless headlight was taken from a Honda Hornet 600 and a beautifully upholstered black leather two-up seat gets the look just right.

The suspension is actually very good from the factory, but that didn’t stop Henrik from giving both ends a complete rebuild with the front stiffer and sporting a set of gaiters and the fully adjustable rear built to suit its new purpose. The Tokico brake package is overhauled and the rebuilt wheels are wrapped in enduro rubber.

The DR-derived engine comes from the factory with dual 32mm carbs to smooth out the power delivery and the big thumper sounds extreme, barking beautifully out of a stainless steel, GP-inspired, rear exhaust system. The bike was ahead of its time in ’97 coming with a full LCD dash, but part of the diet for the new scoot meant swapping that out for a tiny Koso EX-02 unit. A set of Renthal bars and simplified controls get the mass down further and this is now a sub 350lb machine with a tick over 50hp.

“The whole package is just one big smile inducer! It feels light and nimble and the power is more than enough to party on any surface,” Peter grins. And with that, the forgotten Freewind gets the makeover it’s always deserved and hopefully inspires others to try their hand at customising the overlooked and underrated Suzuki.