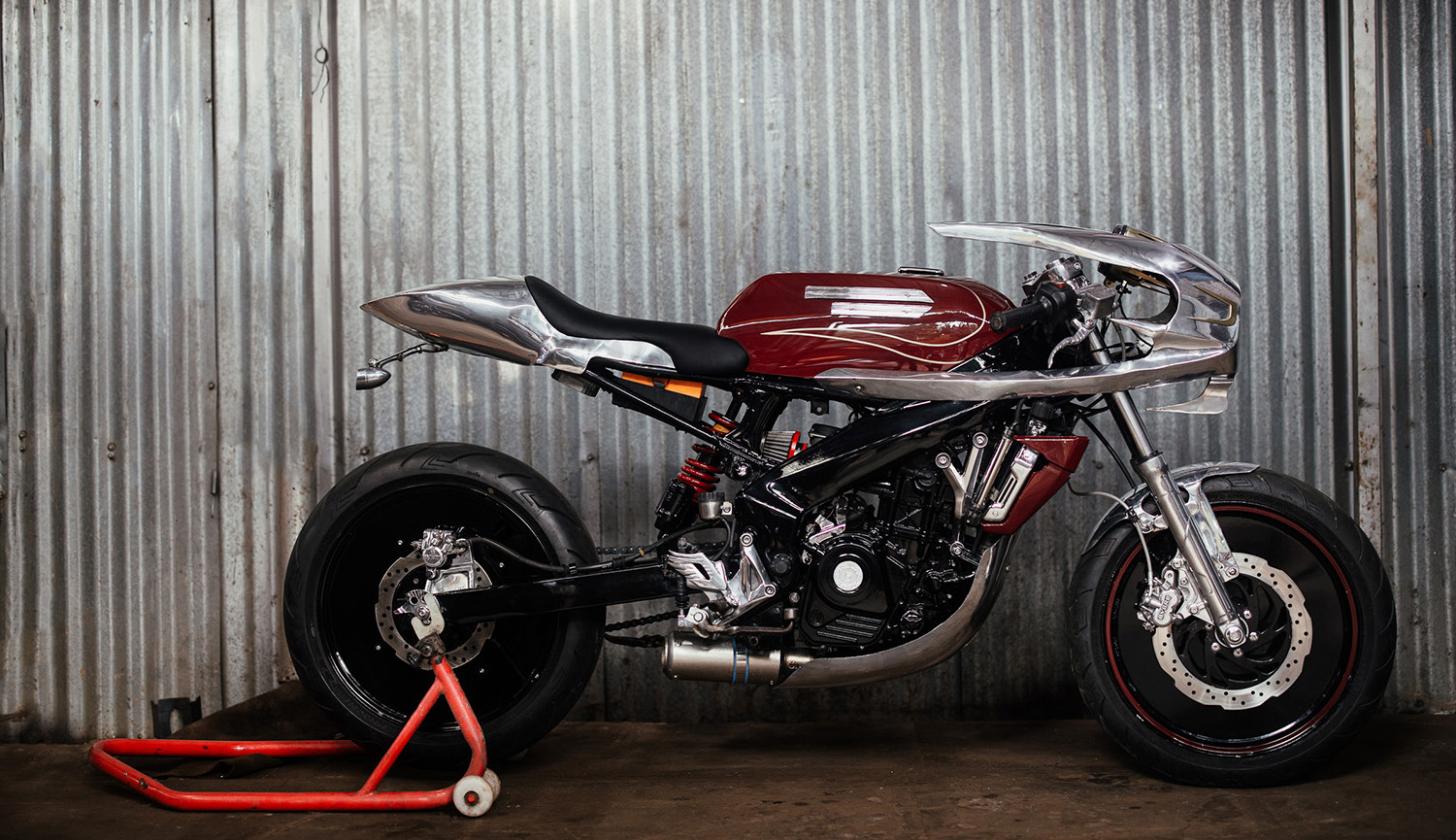 Inspired by one of the globes best bike builders from a land far away, using a cheap commuter bike as the basis and learning new skills as part of the journey, this is motorcycle customisation in its purest form. Anyone can make a Ducati look good, cut the cheque to your local dealer and there, you’re done. But to truly embrace the ethos is to fashion a bike with your own bare hands, utilising whatever two wheels you can afford and creating something that is a rolling representation of who you are in this very moment. A sculptor from the Indian city of Hyderabad, IRONic as he is known, chose this very path and with COVID-19 giving him the free time needed, he took his stock Bajaj Pulsar 200NS and created a true work of art.

From his workshop, the self-taught blacksmith makes incredible pieces of sculpture, functional art and some of the most stunning hand-forged knives you’re ever likely to see. But looking to add aluminium shaping and welding to his arsenal of skills he set about transforming his little bike. “The whole project took about two and a half years as I was working on and off on it between my regular job and other sculptural projects. I could finally complete it when the country went into lockdown in March of last year and there was nothing else to do other than work on the bike.”

A big fan of bike building superstar Shinya Kimura, you can see his influence in the build and there was also initial concept help from brother, product designer HAMerRED. But in choosing to base the build on the Pulsar 200NS, IRONic (I want one of these nicknames), was starting with an almost unseen bike in the custom world from ironically the world’s biggest manufacturer of two wheels, Bajaj. With their newly acquired stake in KTM, that brings with it Husqvarna and GasGas, the company passes both Honda and Hero MotoCorp. A pressed steel frame and a single-cylinder engine makes the Pulsar a simple machine, but at just $2000US new they provide transport to millions.

IRONic had different ideas however, his Bajaj was going to be much more than anything you see in the commuter crush, but it wasn’t all smooth sailing, “Primarily because I was crap at welding aluminium and secondarily because I was crap at shaping aluminium,” he laughs. But determined to master the new skill he pressed on! With the bike stripped down, the chassis was slightly modified and the swingarm stretched 3in to give a long and low look. Next, the plastic fantastic fuel tank was ripped off and in its place goes a modified Kawasaki KB100 tank, for a real metal look with some vintage appeal.

Then it was time to get shaping with the soft alloy, and anyone who has tried to make complex parts with the metal knows that creases become a bane of your existence and a beautiful weld can quickly burn through, destroying the part in the process. “Many of the parts like the seat pan and front fairing were made and discarded 5 or 6 times before I was satisfied with them.” But he pushed on and the front fairing alone is a work of art, from flowing elongated lines, to sharp bordering on lethal edges, the pieces totally transforms the machine.

The tail unit too has a raw appeal, shying away from any attempt to copy the lines of a preexisting design. IRONic simply lets the aluminium flow and form a stunning piece that is offset by the utterly practical seat that gives a comfy ride. More of the metal is used to shape the tyre hugging front fender, while the belly pan not only looks great but helps to hide the little single-cylinder engine. Then there are the artistic touches, the winged heel guards on the rearsets that also feature hand-twisted actuating rods. The sprocket cover draws the drilled out effect of the belly further rearward and the side stand goes the whole way in a true piece of metal sculpture.

“The country was in lockdown when the bike was in the finishing stages and we couldn’t source a coolant reservoir, so I made one out of a stainless steel whiskey flask.” With assistance from mechanic friend Piyush, more improvements to the power plant were made with a pod filter on the intake and an underslung exhaust finishing in a GP styled muffler spitting in anger beneath the engine. To get the stance right the front was lowered by 2inches and ensures the longer swingarm doesn’t have the bikes head in the sky. While wave pattern discs and polished Bybre brake calipers ensure that the raw metal theme continues uniformly across the bike.

The stock wheels are the fairly horrific looking things you get on most modern commuter machines, so a set of covers instantly provides some much needed brawn. Before Ashwin from Parabol Paint Studio went to work with the gun, laying down a mix of black on the functional components and a stunning dark maroon in homage to the 1947 Cadillac built and restored by IRONic’s father. “What started off just as an exercise to learn working aluminium has now instead become a showcase for all the different skills I have learnt over the years.” And we have no doubt the legend Kimura-san would approve.