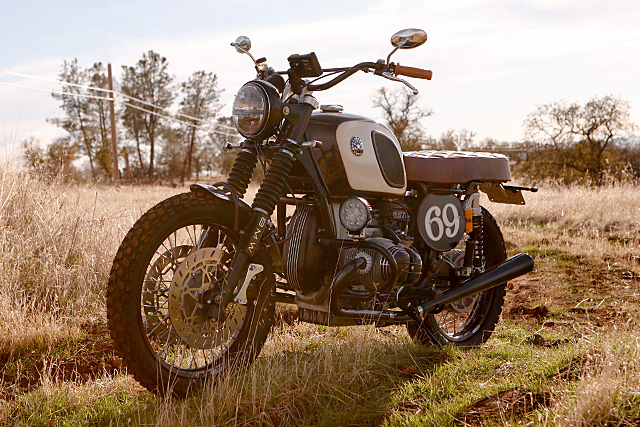 Love, like motorcycling, is a many splendoured thing. The buzz. The feelings of invincibility. The brisk winter rides while completely naked. What? So, it’s just me who does that? Whatever the case, the two really do go hand in hand – like Romeo and Juliet. So when California’s Boxer Metal got an order from a young Guatemalan couple named Rudolpho and Stephanie for a two-up BMW that could handle the ‘charismatic’ roads of this ancient Central American paradise, the team’s very own lovebirds, Chris and Rebecca, got to work. And the result truly is a match made in heaven.

From the get-go, it’s clear that Chris and Bec are kinda Beemer freaks. “Between my wife and myself, we have over 30 years building, racing, riding and loving BMW motorcycles and sidecars,” says Boxer’s very beardy Chris. Located in Northern California, at the foothills of the Sierra mountains, the local landscape offers some of the best riding in the USA. No wonder they are obsessed. How obsessed? “We specialize in custom BMW motorcycles, restoration, and sidecars offering full design and fabrication in steel, aluminum, plastics and 3D printing.” As with most builders who are this into their art, Chris is an avid parts hoarder with the ability to pull almost any BMW Motorrad part seemingly out of thin air. “Chris had been collecting parts for a similar project for himself,” says Bec. “So the bike was literally built from parts lying around the shop.” Sounds like our sort of place.

The story of the bike’s origins are almost as cool as the build itself. A few years ago, Chris was flown to Los Angeles by a client to work on a sidecar rig Boxer Metal had built for him. During his stay, he went on a ride to the Mulholland Highway’s famous Rock Store. “He had a choice of which bike he could ride,” says Bec. “A 2500cc raced-preped scooter, a BMW K1, a cafe’d vintage Goldwing or a bits-and-pieces BMW R100 scrambler. The scrambler won his heart and it turned out to be exactly the right choice.” After a few hours of riding and smiling, he decided that he really needed to build one. Immediately after he came back to the shop, he started pulling parts together. At the same time he posted pictures of what they were building on their website, and you can pretty much guess the rest… “We were contacted by an amazing couple in Guatemala asking us to build them a BMW Scrambler that would be able to deal with their local roads, travel 2-up for romantic weekend trips and be completely reliable. They had seen some of the scramblers we had built-in the past and they really seemed to be enamoured with our style. Chris mentioned to them that he had a personal project that was right up their alley. After an exchange of emails, ‘Tefy’ was born.” Seeing as thought the project started out as a pet project of Chris and ended up as a customer’s bike, Bec says that the hardest part of the build was making sure that the customer was getting exactly what they wanted, while also allowing Chris to finish what he had started. “It also had to be cool and tough enough to handle the harsh Guatemalan conditions. In the end, a few compromises were made on both sides, and Rudolpho and Stephanie ended up with a bike to fit their needs.” While the bike had many hundreds of hours of modifications and additions put into it, including 1000cc pistons, 38mm Dellorto carbs and top-shelf Ohlins suspension, Chris’ favorite part of the project was the mix of old and new. “There’s a whole heap of modern BMW bits on the bike,” says Chris. ‘We added a very cool LED spotlight, some tubeless rims, all-new electrics, a new BMW Factory GPS mount and even some new front discs – and all this on a 40-year-old BMW motorcycle.”

So as Rudolpho and Stephanie ride off into the Guatemalan sunset, we like to think that once again love, art and totally bitchin’ motorcycles have triumphed. Now if anybody wants me, I’ll be outside riding my scrambler in the nude.