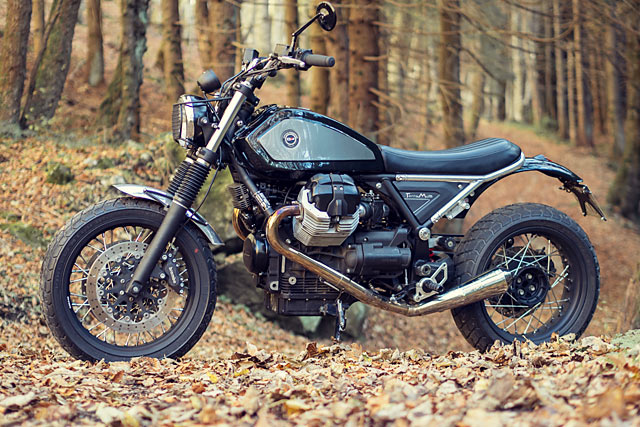 We think it may be time for an intervention. For Officine Rossopuro’s Filippo Barbacane, barely a week goes by in which he doesn’t send us a ‘bugger-me-sideways-that’s-an-amazing-build’ bike. There can only be a few valid reasons as to the cause of his ceaseless productivity. He’s either possessed, a robot, or he has cloned himself half a dozen times. Unable to decide which scenario is more likely, we’re going for a combo answer; clearly the guy who makes these bikes is some sort of Sextuplet Satanic Cyborg that’s hell-bent on world domination through a never ending stream of totally sweet-ass bikes. Here’s his latest evil effort – a Moto Guzzi Bellagio scrambler he calls ‘Terra Moto’. “For a long time, I have wanted to make a bike that was a cross between a scrambler and a ‘classic,’ says Filippo, now all better after his recent clone robot devil thing. “I wanted a bike that you could use both for the beautiful mountain roads, be they dirt or paved, but also for medium-to-long distance rides on roads between cities.”

Taking the idea and running with it, he decided that the perfect base for a bike like this was Guzzi’s Bellagio. “It’s a motorcycle that’s really undervalued, mainly because it’s design fell awkwardly between a custom and a classic. The end result was a bike born with little personality. Or as we say in Abruzzo, it was ‘neither meat nor fish.” But it’s not all bad news with the bike. “It has a good chassis, good forks, spoked wheels, and a single-sided swingarm,” says Filippo. “But best of all, it has the 2-valve engine – quite possibly the most beautiful of the modern Guzzi engines.” His first goal? To make the damn thing lighter. “I started by cutting the rear frame and replacing it with an aluminium piece that’s around five times lighter than the original.”

This then allowed him to redo the entire lower part of the bike, remove the air box, place a lightweight lithium battery, and make a handful of new aluminium body panels. Apart from making the bike look this good, they and the seat afford the new bike considerable space, allowing Filippo to equip the bike with a bunch of cool accessories. At the breezy end, he’s made and added a hand-made iron mesh to protect against stones and debris. “I wanted a riding position that was as close to perfect as possible, so for me that means high and wide handlebars with some risers and adjustable footpegs of our own design, made right here by us. We have them for a few Guzzi models.” The chassis has been improved by modifying the front fork and replacing the rear mono shock with something a litter more specializzato. The short muffler was made by Mass Exhaust, and it saves quiet a few kilos over the original. “Weight savings also led me to use LEDs for the back lights and turn signals, various aluminium supports, a 2-into-1 exhaust; pretty much everything I did on the bike was to try and save weight.” The multi-purpose Pirelli tires have done a great job in making the bike rideable on all types of roads, straight or bendy, and they have also given the bike excellent traction on dirt. “I’ve used this bike on all types of terrain, and in 2016 I took it to Italy’s largest rally of Moto Guzzis in Mandello del Lario. I rode it for several thousand kilometers without any  problems whatsoever. It’s truly a versatile bike. Unfortunately I sold it recently, and with a heavy heart.” But don’t fret; Filippo just got another Bellagio for a brand new project.” “I think that this would be the perfect donor bike for a new scrambler variation of the V7 from Moto Guzzi. I also have the distinct impression that in the coming years, this model will be used for more and more custom builds.” And Let’s hope that’s true, because if what we are seeing here is any indication, it’s a great platform to build pretty much any type of ‘bugger-me-sideways-that’s-an-amazing-build’ bike your heart desires.