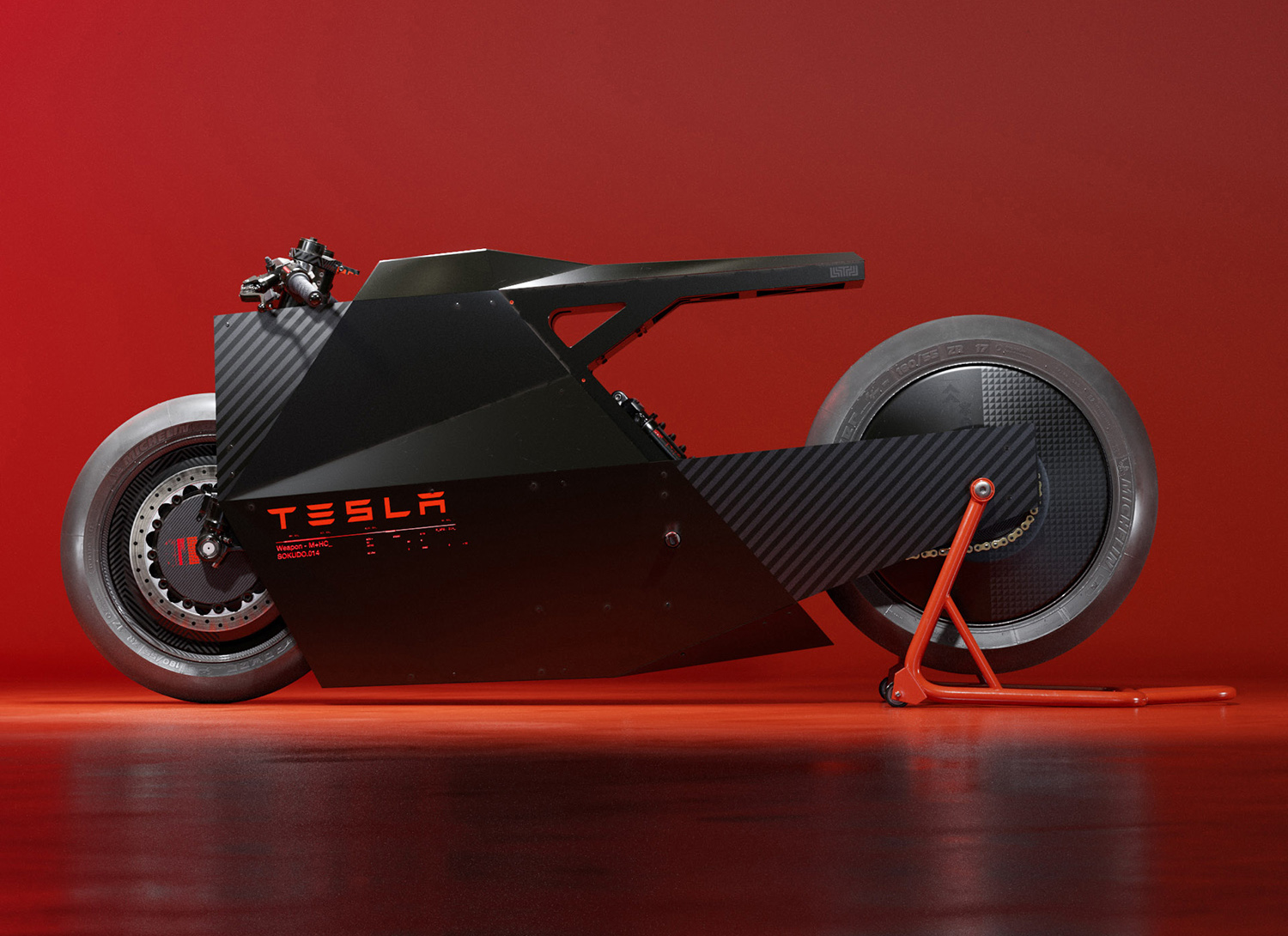 Similar to the impact that the custom bike world’s had on the design of production motorcycles, the makers of today’s track and performance-focused cars have increasingly looked to modern concept artists for inspiration and influence when penning widebodies and aero bits. And two of the most eminent artists currently working in this space are Ash Thorp and Carlos “colorsponge” Pecino.

Born in Spain and now based in London, Carlos has amassed more than 15 years of experience in the digital realm and has contributed to everything from vehicle designs to episodes of Netflix’s Love Death + Robots. Largely self-taught, Ash boasts a portfolio that’s is no less impressive, having worked on numerous triple-A video game titles and big-name movies including 2014’s Robocop, Ghost in the Shell, Ender’s Game, James Bond: Spectre, and various high-profile vehicle projects such as designing Ken Block’s Fox-bodied “HOONIFOX” Ford Mustang Gymkhana Car and penning the design for the mid-engine muscle car-style Batmobile for the latest Batman flick  — just to name a small fraction of the accolades on Pecino and Thorp’s resumes.

The pair is also the force behind the Make Haste Corp. (or “M.H.C.”), a fictitious brand and the name of a long-term project in which the duo aims to produce a total of two dozen digitally rendered vehicles over the course of the 2021 year. “It’s a false company name I created when Carlos and I were building our other project Evinetta. We loved the logo and the name so we kept it and appointed it as the title to the potential 24 builds we’ll be doing this year,” Thorp tells us.

Despite the first dozen digitally-rendered works in the M.H.C. Collection being comprised of one-off cars and trucks, the latest additions see Thorp and “colorsponge” venture out of their comfort zones to tackle a motorcycle project. Carlos’ two-wheeled render has been dubbed the “XENOTYPE,” while Thorp’s bike (seen here) was christened “SOKUDO,” (which is Japanese for “speed”).

“I love motorcycles and have always wanted to own/ride one but never have outside of dirt bikes.  I’ve always really appreciated the form/function factor of bikes and how simply beautiful they are, so I wanted to take a stab at how I would design a bike if I had no rules and just an empty slate to start from,” explains Thorp.

In his day-to-day life in Southern California, Thorp drives a Tesla, and it’s the awesome performance capabilities of the American-made EV that have partially inspired Ash’s vision and the project’s direction — as has Ash’s proclivity for ’90s era Ducatis. “Typically my muse comes from either nature or true functional objects — mainly military, and in this case, the F-117 Nighthawk was also a key inspiration,” relays the concept artist.

Rather than penning an advanced monocoque or the like, Thorp opted for something of a twin-spar-meets-cradle setup with a dead straight top frame rail that continues back through the subframe while a pair of cross-reinforced members jet downwards to cradle the EV powertrain’s battery pack and meet with the swing-arm — another custom-designed item penned by Thorp.

The frame has also been paired with a shortened inverted fork, while the swing-arm now connects to a shock that was plucked off of an existing 3D model of a Ducati that Thorp purchased for the project with the intentions of cannibalizing. The same Ducati would also lend its shock reservoir, braking setup, and a few other very minor odds and ends, not only saving the designer time and effort, but also bringing an extra degree of realism to the table.

“I felt adding these pieces from an existing bike would further help ground the concept in a plausible potential reality,” Ash exposits.

The Lockheed stealth bomber’s influence on SOKUDO’s carbon fiber bodywork is readily apparent, boasting a series of angular panels that meet in an origami-like fashion — a boxy style of fairing that Thorp calls an “Exoskin.” Where a tank would normally sit atop the frame rails, Ash has crafted an angular, low-profile item, putting a thoroughly modern spin on the classic moto silhouette.

The outside line of the front of the tank also runs straight through, becoming the inside line of the triangular pieces that shroud the forks. The remaining, rear portions of the frame rails have been capped off with a thin seat that runs the full length of the subframe before cutting off at the boxed tail.

“The still images don’t show this, but the ‘exoskin’ — or outer shell – would pivot, move, and adjust its aero angle as needed based on the rider, speed, and real-time road conditions,” says Thorp.

Furthering the angular origami theme are a set of panels that act as swing-arm covers, adding a bit more modern flare, upping the bike’s drag coefficient, and helping to balance out the shape of the motorcycle. Shod in sticky Michelin Pilot Power tires, the rendered ride’s wheels have also been gifted a set of carbon aero disc covers, shrouding the majority of the carbon fiber rims that lie beneath. Being an electric motorcycle, SOKUDO lacks a gearbox and clutch, so Thorp has opted to remove the foot levers, leaving only pegs in their place and relocating the rear brake controls to where the clutch is typically found on the right handlebar.

The active aero bodywork isn’t the only advanced, futuristic feature Thorp envisioned on SOKUDO. After reviewing the swing-arm and linkage design of various production models, Ash grow concerned about the angle of the rear shock, however, rather than simply relocating, repositioning, or adjusting the item, he conjured up a more grand and imaginative solution.

“I figured I would solve this by ‘inventing’ an inner arm that links to the main subframe and has an internal tension bar system that would react to the feedback of the road/rider/speed/conditions in real-time, which would also be connected to a Neurolink-style interface that would feed off of the users’ biomechanics. The joy of this stuff is it’s all conceptional so the sky really is the limit,” explains Thorp.

What’s more, the concept was also designed to have multiple stages/settings. In the images seen here, SOKUDO is in its resting (or parked) mode, though when being ridden, the suspension raises up, becoming an active setup that also automatically adjusts and fine-tunes itself based on real-time road conditions.

The final step in SOKUDO’s creation would be selecting a livery, and the digital nature of the project meant Thorp had nearly unlimited freedom to experiment with an enormous variety of ideas for colors and finishes.

“I originally wanted to keep it all super pure white and clean, though once I tested the black on red I knew that was the final livery that I would reveal the project in. I also love to make odd variations in colors and push the norm so I came up with a pastel version — which I’m honestly not sure if I like or not but for now… I suppose it will work,” muses Thorp. “Given the fact that these are digital, I am able to rapidly prototype different materials, colors, formations, and concepts, making the possibilities endless.”

Just like when building an actual one-off motorcycle in steel and metal, creating this rendered two-wheeler came with some unforeseen hurdles and challenges.

“CGI is always a black hole that throws all kinds of oddities at you when trying to create this level of work at a rapid pace,” relays Ash. “I must have remodelled and redesigned the frame and Exoskin 4 to 5 times until I got it right.  Lots of iterations and starting over from scratch.  It’s a bit deflating but sitting here now looking at the final concept, it makes me happy and the effort was worth it for me. I really set out to design something different and brutal, I feel I got as close to my original intentions as possible.”