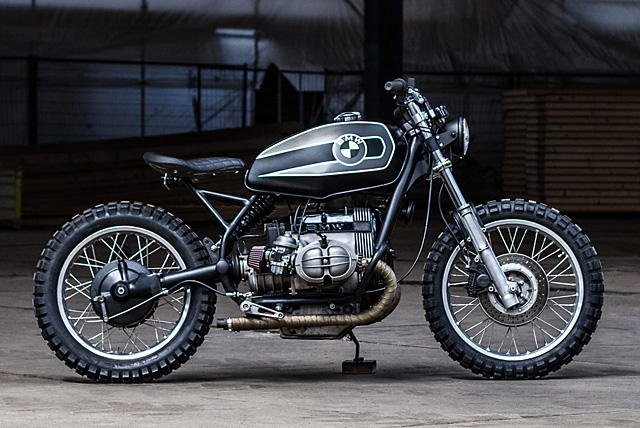 Amsterdam-based Ironwood Customs create some of the finest and most unique ‘brat style’ bikes you are likely to see. ‘Heartbreaker’, or IWC27 – to give it its formal name – is the latest creation to be born from Ironwood and man, this is a wild child that makes Hunter S. Thompson look like your Aunt Shirley on a Sunday afternoon. Rebellious, challenging and unrestrained, this stripped back BMW strikes hard and fast and leaves a lasting impression. And some decent emotional scars, too. Like most heartbreakers, you commit four of the seven deadly sins just looking at it. And to ride it? Well… So, what is it? You tell us. Part bobber, part scrambler, part tracker – and maybe even a hint of cafe racer? IWC describes it as an ‘off-road brat style’. New genre, anyone?

An R75/5 was sourced as a base, although it’s clear that not much remains in the finished bike. R80 front forks were slotted in and the front was lowered by 60mm to sharpen the steering and improve the stance. While they were there, the forks were further enhanced by the addition of an aluminium upper fork brace to keep thing where they should be. Anyone lucky enough to ride the Heartbreaker will find themselves reaching over an R65 tank for the relocated ignition, sat in a firm Biltwell bobber-style seat and looking out over a brand new Acewell speedo. We could think of much worse places to spend time, and not many better ones. The engine is from an R80, and it sits inside a ‘73 R75 frame which has been expertly and extensively modified in-house at IWC. The rear subframe has also been chopped back, leaving just the bare essentials needed to support the rider. The twin shocks have been binned, replaced by a HyperPro mono shock which Arjan, Ironwood’s main man, assures us it was way harder than it sounds; various combinations and positions were tried until the perfect balance of ride quality and handling was found. Then everything was welded into place with millimetre-perfect precision by their mate and welding wunderkind, Marjin. IWC’s aim was to give the Heartbreaker that low and mean stance, but still be able to offer a composed and calm ride into the city when you’re wanting to escape the bulldust for a few days. But with looks like this and the combo to back it up, we’re not really sure we’d ever want to leave the dirt for the downtown. Ever. This bike is so many things: intimidating, impressive, imposing and just plain wonderful. Those knobby tires, the minimalist frame, the 797cc boxer twin-engine and so many more details merge together in perfect harmony to forge a unique and breathtaking creation. And the icing on the already-iced cake has to be that new tank art. Beautifully recalling the original graphic designs of the BMW brand in the 30s and 40s, it adds a whole new level of retro coolness to this amazing build. If you could see yourself as the new owner of the Heartbreaker, it’s now for sale. Hit the guys up on their Instagram or Facebook page and this savage beast could be yours. And while you’re there, take a minute to check out this and many, many more of their incredible builds. We promise you won’t be disappointed.