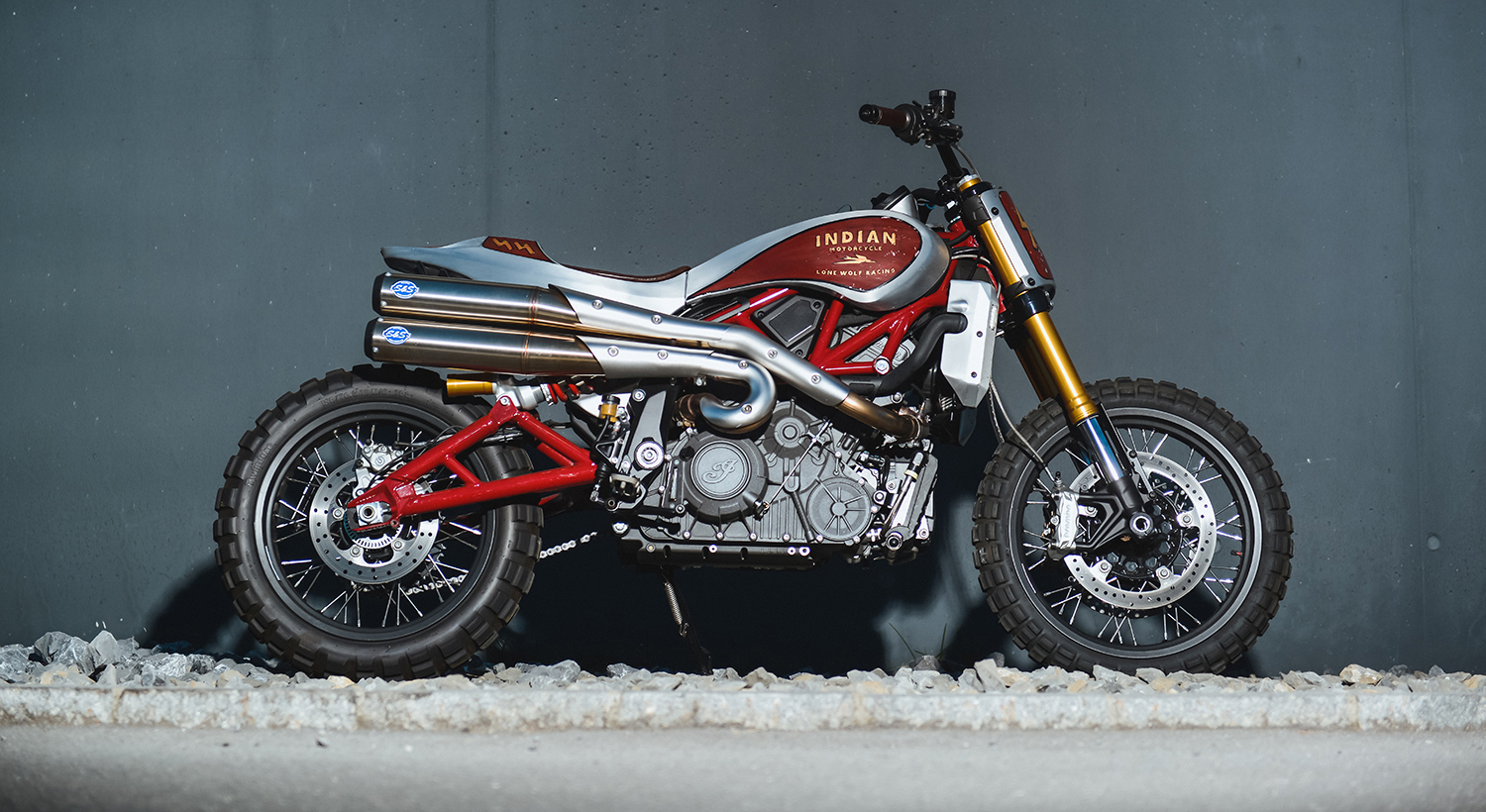 The Indian FTR1200 was greeted with enormous excitement when the project was announced and the first pictures emerged. When the bike finally arrived it didn’t let anyone down, looking like a flat track weapon and providing a grin-inducing ride on the street. But the truth is, we haven’t seen more than a handful turned into customs, that’s largely down to how good the stock machine is. Enter Heritage & Sons, a united effort of some of Switzerland’s best, they love themselves some Americana, especially anything vintage. So ready to dive in they picked up a new FTR and set about giving it heyday heraldry with serious modern mumbo.

The man behind the spanners is Serge Lindemann, who’s stunning Norton 810 Dunstall we featured less than six months ago. Joining him at Heritage & Sons is Dany Kunz of Switzerland’s Ace Cafe in Lucerne. This gives them a motorcycle mecca from which to sell their goods, that not only includes brilliant bike builds, but classic American pickup trucks, industrial furniture, unique designs and an old school rugged vibe that is at the essence of everything they do. Clearly with a love for dirt track, their most recent build was a flat track Yamaha XS650 in the King Kenny colours.

But with the FTR1200 still in its customisation infancy, the new build would give them a chance to really give the company some global exposure. The fact that Indian Switzerland jumped on board was all the added motivation they needed, there is nothing like factory support to get you going. Sitting down with pen in hand Serge laid out his design, injecting a board/flat track look of 100 years ago for the aesthetic, without taking away any of the functionality of the bike. With access to the Indian aftermarket catalogue, the bulk of the work would come in the form of the body.

With the bike stripped down, Serge got busy making the templates for the all aluminium panels that would cover the machine. With the fuel tank itself being a cell, the first part to be made is the cover to go over the top and instantly the rounded lines and swooping curves bring to mind the factory look from many moons ago. But it wasn’t as simple as crafting the right appearance, with the filler and the instrument all integrated, this is a serious piece of craftsmanship and it’s easy to see how the hours must have added up.

The tail is no less impressive, merging the seat, rear flat track style and side number board all into one single piece that seamlessly hugs the factory frame. The tail light emerges flawlessly and the design is such that the stock inner fender is still 100% functional. All of which is vital given the strict rules that apply to the registration of a vehicle in Switzerland. The front number board finishes out the panel work and is another piece of incredible fabrication, mounting tight to the forks with a small recess for the LED headlight.

All of the lighting, front, rear and the turn signals are MFK-approved and offer excellent functionality without disturbing the lines of the bike. Next on the list of tasks was painting it all up, and the truly vintage look has been achieved using an original Indian paint code and the hand lettering for the ‘Lone Wolf Racing 44’ machine is done in genuine 18-carat gold leaf for a special touch. The bars have been swapped out for a slightly lower set giving more leverage, with the grips made from the same classic leather as the minimalist seat.

As our fearless editor found out recently, the FTR engine delivers serious grunt defying the factory quoted figures. To dress up the big V-Twin a set of aluminium radiator covers to match the body goes on before the boys turned their attention to performance. The Flat track Akropovic system was first tested before going to the full Grand National 2:2 High pipe system by S&S. With the high flow cats built-in, dB killers for rego and the alloy heat shields it was the perfect pick and unleashes the full potential of the engine. On go a set of TKC80 tyres and the boys had put in 200hrs of work to turn out this brilliant tip of the cap to Indian’s century of racing, and give Heritage & Sons another slice of unique Americana to add to their growing stable.