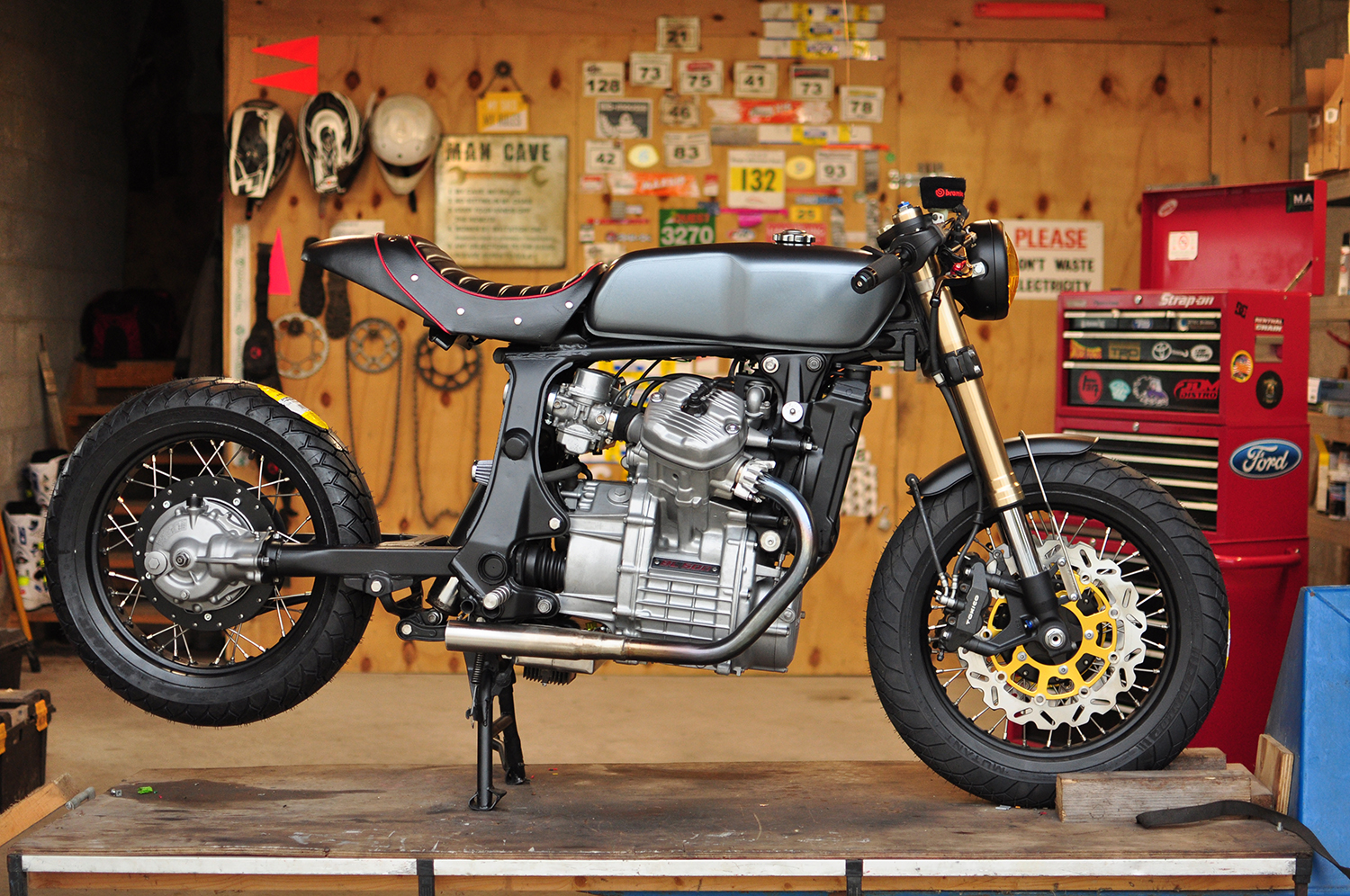 Tinkering with bikes started out in the most simple of fashions, all you needed was a spanner and you were away. But things sure have become professional in the custom bike scene over recent years and with major brand involvement and six-figure motorcycles not unheard of, it would be easy to be intimidated. But not Brian Leddin, the man from County Cork takes the egalitarian approach and decided to put his ‘everybody should have a go; ethos into practice. On the hunt for something equally as working class, he found this Honda GL500 Silver Wing in full plastic glory. Into it he’s poured his heart and soul and built a custom creation for which he doesn’t give himself nearly enough credit.

“I have never been a very creative person, I can’t even remember as much as drawing a picture so when I decided to start this project I expected the result to be, at best, a complete disaster. In my work, my function is to make machinery work from a purely functional point of view, aesthetics is not something that matters or is ever taken into consideration. For this reason, making something “look right” is way outside my area of expertise. So, having established that I am totally unqualified to take on something like this, I had been looking for a project bike for 2-3 years,” Brian, an engineering manager, explains. After something with an unusual engine configuration he first sought out a BMW and then a Guzzi.

But neither come cheap these days, “Then, last Feb I came across this thing of beauty, a vision in plastic!” he smiles. Sure it had seen better days, was tatty around the edges and the engine was known to overheat. So the first part of the plan was to strip as much of the dead weight as possible, not only the plastic maggot fairings but anything that absolutely didn’t need to be there. “Then to re-assemble with a design that would allow me to push the main mass of the bike as far forward as possible, creating negative space over the rear wheel. This would I felt take advantage of the monoshock setup and longer wheelbase of the GL platform.”

With COVID having shut everything down, there was no possibility of using a variety of venders to assist, so instead of sandblasting, it was out with the grinder and an assortment of brushes to get the frame and parts as clean as could be. Then a cutting wheel went onto the grinder and was whizzed into action, taking off the subframe and ensuring there was plenty of negative space around the swingarm and rear wheel. While at the back of the bike a handful of new parts and Brian was rebuilding the rear shaft-drive hub for endless hours of smooth operation. Before it was coated in a deep silver and the frame and swingarm were given a fresh coat of paint too.

The rims many of you will immediately know are not the factory offering. “The wheels were 100euro second-hand items from a Sachs Roadster. I stripped them and mated them to a Cognito Moto front hub and custom rear conversion plates made by Dave a local fabricator. Spokes were generic stainless steel items with the threads hand turned and cut to length.” The Dunlop rubber fits the theme perfectly and gives Brian a generous tread pattern to show off on the exposed rubber. Next, he wanted the bike to handle and dipping into the parts bin he pulled out a full Suzuki GSXR front end. This is made to fit with some minor modifications and new bearings, transforming the braking too.

“The engine was checked over and was in good condition apart from cam chain and tappet adjustment. Some new seals and basic servicing saw it purring like a goose. The carbs were in an awful state and took hours of cleaning. A rebuild kit and repairs to the inlet manifolds saw it running as well as these carbs will allow.” Always with a budget in mind, the exhaust system is kept sweet and simple, barking out each side and letting all and sundry hear the V-Twin engine at full noise. Where the engine really benefits is the total clean up job that’s been performed, even the radiator looks brand new and the Guzzi like Honda donk is left to shine.

For the visual impact, there wasn’t going to be a fortune thrown at the bike, it’s just not how Brian does things. “A modern expensive LED headlight would not add anything to the look and so a cheap item sprayed and added to a set of simple handmade clamps were used.” But that doesn’t mean you can’t make big changes for loose change, the switch to a much smaller tank in a neutral hue really allows that engine to take centre stage. While Brian’s desire for negative space is met with simple sophistication thanks to a seat that has just the right amount of custom cool. Function isn’t forgotten however with a taillight mounted underneath the perch and a very neat front fender install.

With a timeline set to complete the bike within six months and not become one of those 90% complete projects on eBay. The final details are about giving the GL some personal touches like the BL500 badges, and improving the riding experience; adjustable levers on the bars and a set of hand turned footpegs. “Bike building should not be an elitist past time. Anyone should be happy to give it a go, maybe fail but still learn and create something personal to them. They will still have achieved more than the person who points out the flaws but never attempted anything themselves,” Brians says. And in a short amount of time, on a limited budget and with his ever-present modesty about his own skills, he’s transformed a dying ’80s junker, into a slick custom that is truly his own!