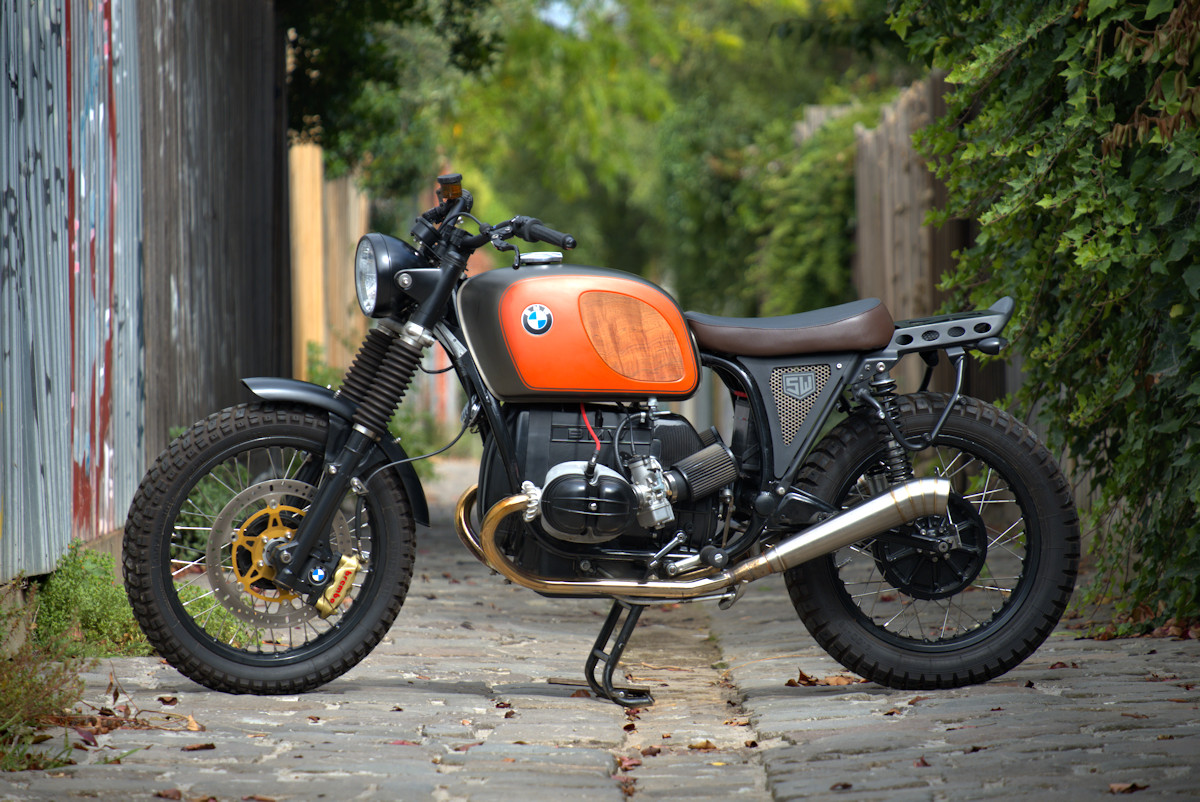 We’ve all heard it at some point, the abbreviated quote, Jack of all trades, master of none. With the reality being that to compete in the often cutthroat world of being a custom bike builder, you simply have to be capable of all things to maintain the financial viability of your business. But some refuse to compromise and dedicate themselves with an unwavering singular focus. Enter Adrian Braun, a doyen of the BMW air-cooled donk, who has returned to our pages once again with another virtuoso performance. From the laboratory that is Melbourne, Australia’s Skrunkwerks comes this picture-perfect BMW R90 Scrambler that’s been touched all over by a genius.

It’s been a few years since we touched base with Adrian, the last you saw of him on Pipeburn was when we featured his incredible 1987 BMW R100 salt racer. With a single goal of going as fast as possible on the flats of Lake Gairdner, the bike was still utterly beautiful and executed in a way that had the comments section filled with rave reviews. It’s this same approach that has been taken to building a scrambler from an R90, as the man himself says “From the outset, the focus was on practicality, comfort, and performance centered around a cam of my own design.” With the final point ramming home that this is a man who truly builds bikes, not just bolts on parts.

What Adrian had in mind for the use of the bike was a mile muncher, a bike that could tour and do those successive days in the saddle, but still, be more than capable when you turn off the highway and onto some hell hole of a rough and rocky road. “The large slab sided tank of the R90/6 spells Teutonic classic and is a solid model to form the basis of a build. But it can stand improvement in a number of areas: these became the heart of the build’s mission.” Speaking of hearts, it all starts with a bare block and a bump up in capacity to 1000cc with the use of a Siebenrock re-power kit for that full litre bike feeling.

To suit Adrian machined the heads to not only avoided the stepped piston design contained within the kit, but to also increase the compression ratio up to 10:1. A service that is offered by Skrunkwerks to owners of R80, R90 and R75’s. The extensive engine work continues with the heads ported and the intake valve diameter taken out to 44mm, all verified by the in-house flow bench. Then in slides the performance dual pattern cam designed by Skrunkwerks who offer a regrind service to the public. The supporting cast is a set of 38mm Dellorto PHM carbs with velocity stacks for correct tuned length hidden under large K&N pod filters, Mufflers by DanMoto, and the factory airbox replaced with a Skrunkwerks carbon fibre rear engine cover.

As for the tractor-sized stock flywheel, it’s been replaced “with the much lighter ‘clutch carrier’ of later models which also allowed the fitment of the much improved gearbox from a 1987 R100. Shifts are less clunky, smooth, and direct.” Now that Adrian had one hell of a boxer to bolt into the bike he could get to work on the rest of the project and the custom seat and subframe took a lot of time. Studying the pictures you can see why, form and function are out of this world with the luggage rack and brackets designed for Legend Gear saddle bags by SW Motech Germany.

There are a host of beautiful touches, the SW logo of the company incorporated into the side covers, mesh used to provide an extra depth to the look and speed holes neatly cut to reduce the overall weight of the utterly functional item. The perfectly trimmed seat provides an enormous amount of comfort for those epic number of hours in the saddle but is still designed in a way that is pleasing to the eye. The stock tank adds a similar vibe, holding plenty of go-juice but looking beautiful doing it, “custom paint and kneepads made from Tasmanian Tiger Myrtle wood made by my friend Tim of timkillcustom.com”.

With Adrian always focussing on improving a bike in every single way, the crappy stock brakes had to go. In their place is a 4 pot Brembo caliper from a GSXR 750, that mates up to a massive 330mm rotor that was originally intended for a Ducati 1198 superbike. Making this conversion possible was a host of parts from R90X Designs Big Brake Adapters, that ensure the spacing is spot on. All of this extra power is then fed by a Magura HC1 radial master cylinder and new levers. The rear shocks from Ikon provide 15mm of extra height, while the powder-coated rims with SS spokes are wrapped with Heidenau K60 rubber.

The controls make the bike a pleasure to ride, Renthal FatBars with compact Ducati switchblocks feature hidden wiring in the bars. A Motogadget m-unit controls the show and sends the signals to a Daytona Speedo, Kellermann LED bar end indicators and all-in-one LED rear lights. Everywhere you look is fit and finish to the highest of standards, from the functionality of the fenders, to the way each detail is finished to a factory level of quality, you have to admire the dedication to perfection on a bike that will no doubt turn over tens of thousands of kilometres. But that’s just the way things are at Skrunkwerks, amazing ideas and awesome designs that come to life to produce BMW’s at their best.