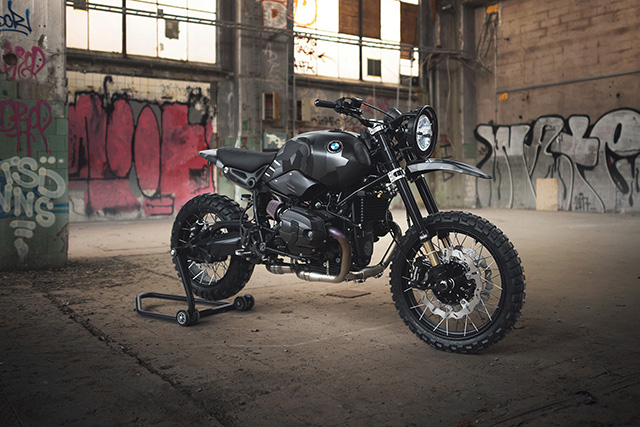 Keep those two wheels turning; across the endless climbs through the Pyrenees, before taking the summit of Alpe d’Huez on the way to the finish line. No, it’s not the Tour De France but how Anton Knutsson of Injustice Customs spends his motorcycling holiday in the European summer; and it gave him an idea. What would be the perfect custom bike to complete the stages of cycling’s grand tours? With the help of BMW and Ohlins he’s built the answer, a 2019 BMW R nineT Urban G/S that’s ready to bring the thunder to the mountain tops, rightly named ‘Thor’. 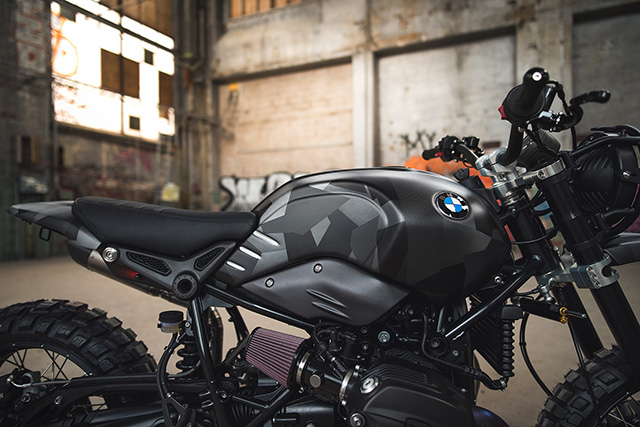 Returning from his summer ride to the workshop of Injustice Customs located in the heart of Gothenburg, Sweden, Anton couldn’t help but think there was a better way to do the mountain mission than on the Flat Track Sportster that had been his most recent steed. “It was an amazing trip, but I felt that another type of bike would have made it even more of an experience. BMW are pioneers on the adventure scene, so creating something that would allow you to take on those long adventure trips but for us guys that really can’t see ourselves riding around on a big GS.” 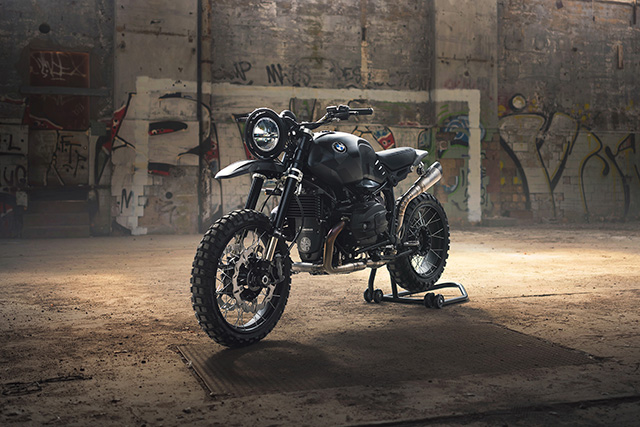 After approaching BMW to talk possibilities, they all agreed that the best platform for such a build would be the Urban G/S model of the ever-popular R nineT. Loads of practicality, adventure and reliability rolled into a more fun sized package than the full-on adventure machines that are the 1250GS beasts. With the new BMW in the garage Anton got down to work with the design inspiration coming from a mix of a post-apocalyptic environment the bike would find in a Swedish wasteland and the rugged and angular stylings of the Ice Breakers that patrol the country’s frozen winter seas. 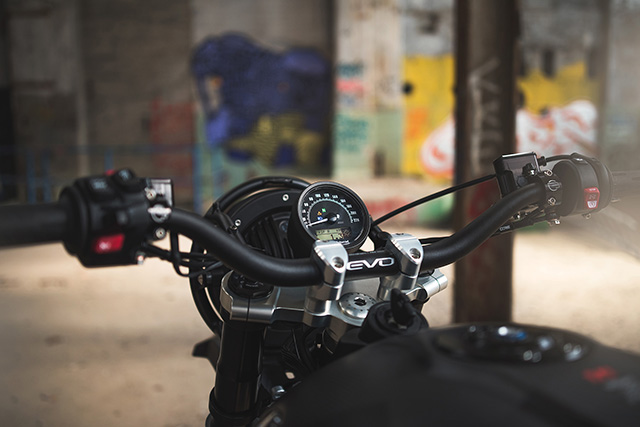 With all bodywork to be completed in carbon fibre, this was not only an exercise in aesthetics, but weight saving on an already stripped-down ride. Each component styled more aggressively than the stock part without losing its overall symmetry. Wanting the bike finished in a snow camo finish to truly emphasise the terrain that Thor calls home, Tom Fuller of Images Designs was brought in to do the job. “It’s a challenge when you tackle carbon-fibre, it often has lots of pinholes which affects the paint. However, the carbon-fibre sourced from Ilmberger Carbon was really high quality which made things much easier,” Tom Explains 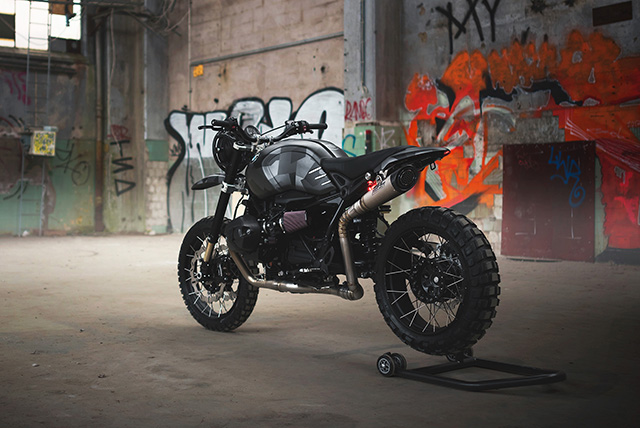 “First, you have to use a transparent sealer, then layer the paint many times over to get the camo look. After building up the layers, you then sand it back to remove the edges. Finally, the topcoat is a ‘denim’ lacquer, which is matte but buffs up in high wear areas – just like a pair of jeans.” And the master painters work was done. Finishing out the visuals, the headlight actually comes from an Enduro bike. Then all the mounts and the aluminium ring around the big LED light were first printed out in PLA on a 3D-printer, then machined in aluminium before anodizing. 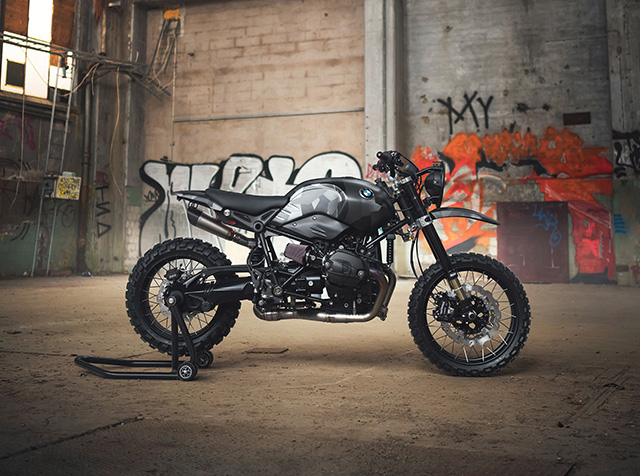 But ask Lance Armstrong and he’ll tell you that a performance boost is what’s required to win in the European mountains and for the best possible advantage Anton turned to his countrymen at Ohlins. The world’s best suspension component producer not only agreed to come on board but had a new range of parts that make their debut on ‘Thor’, designed to be the duck’s guts for adventure riding. Controlling the mono-shock rear is a trick Ohlins Blackline S46, 2in over stock, capable of providing perfect control on every surface and at any speed. 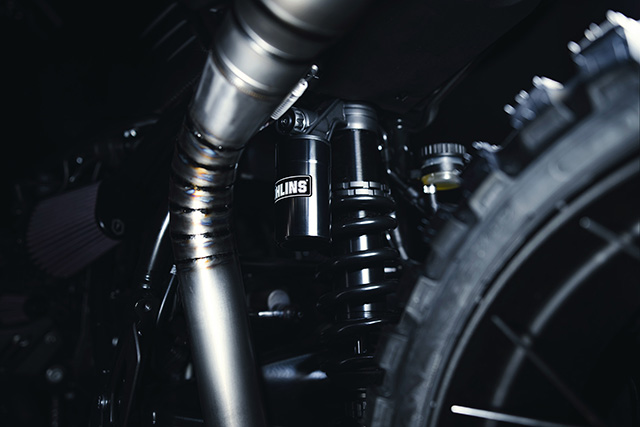 To take care of the front the friendly team at Ohlins provided the CAD drawings for the matching set of front forks, that are also 2in over stock, and Anton could set about making a set of triple trees to mate them to the BMW. With the design finished in-house the final pair was machined in the UK from billet alloy with risers incorporated and produced to Anton’s exacting specifications. The braking isn’t left to chance either with the lower legs sporting Berringer radial calipers fed by the company’s master cylinder, all grabbing a set of light weight braking wave discs. 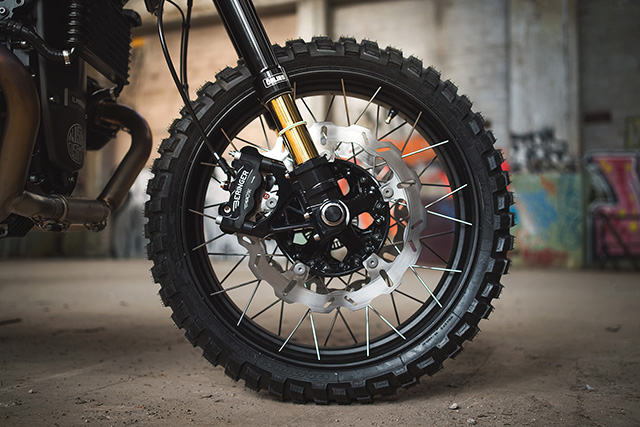 The boxer twin is now dressed to impress with everything blacked out to match the theme of the bike, including a custom front cover. To unleash some extra power Anton took out the TIG and hand fabricated a stunning set of titanium headers with cross pipe. Before snaking things rearward and finishing out the system in more of the uber expensive metal that makes up the SC-Project GP muffler for some flame spitting fun. A set of K&N filters supply copious amounts of fresh air and it’s safe to say power isn’t a problem. 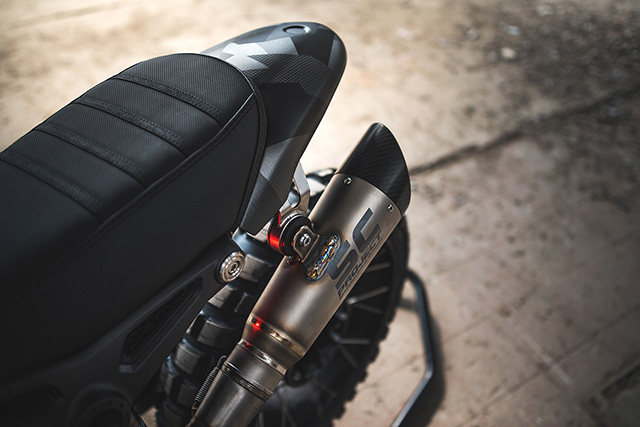 To make hanging on a breeze, the Injustice Customs cupboards were raided for the right set of Pro Taper bars that are outfitted with a reduced set of switches. While an Ohlins steering damper keeps Thor from shaking his head off and bear claw foot pegs keep the rider’s feet firmly in one place. Now well under 200kg fully fuelled the middleweight adventure machine adds a whole new level of excitement to those mountain passes that a 500lb tank of a bike just can’t possibly match. With the latest in Ohlins technology to put through its passes, powered by a firing breathing BMW twin, Anton has an excuse to head back to the mountains – consider yourself warned. 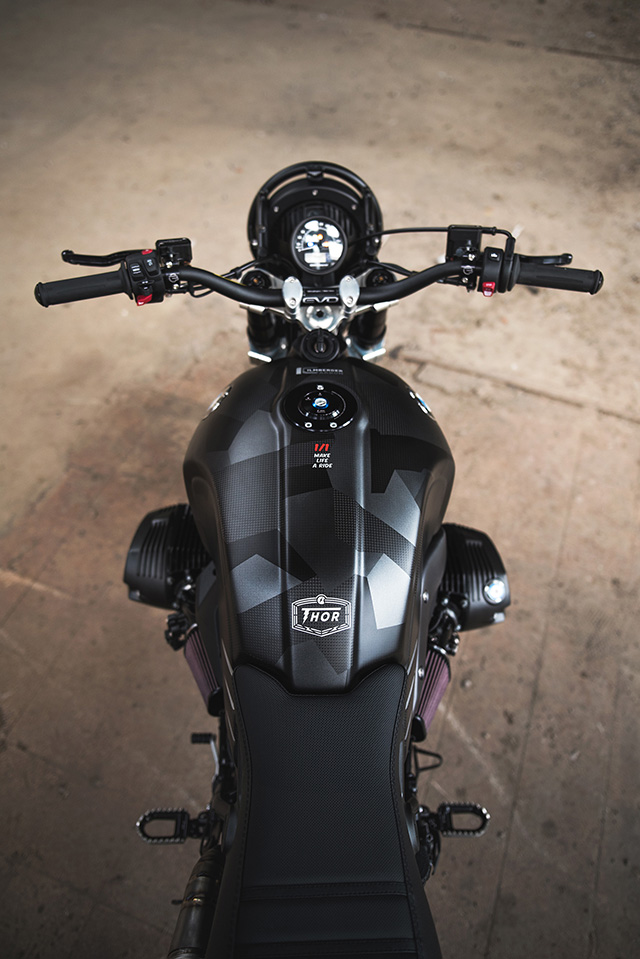 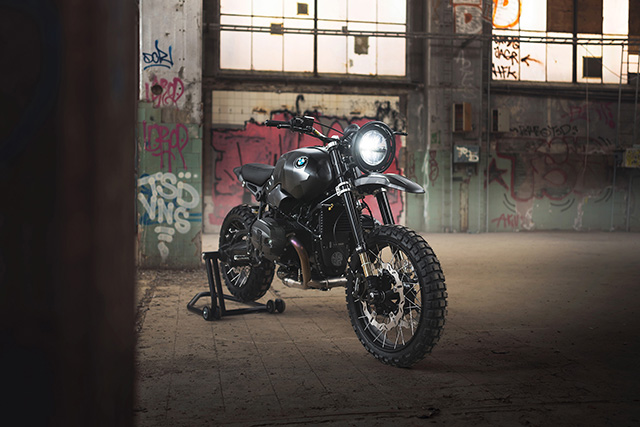 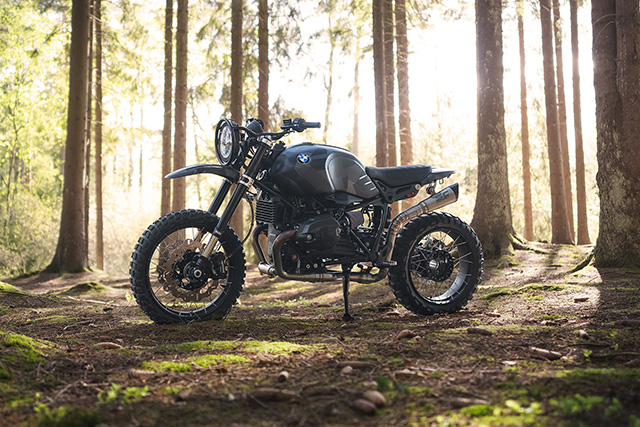 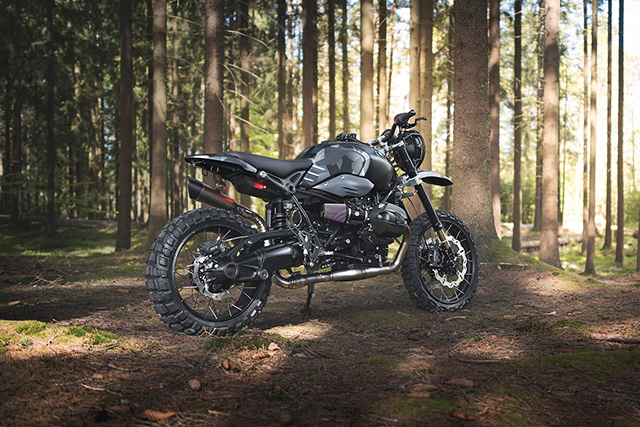