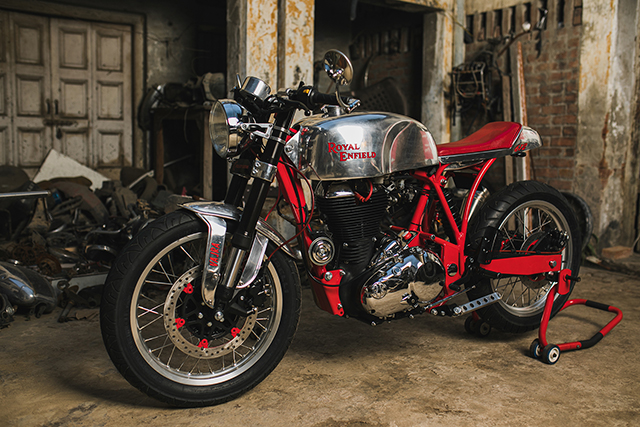 Few, if any, foreigners will travel to the magical nation of India and leave without experiencing a life-altering change. However, it’s also a daunting place for the virgin traveler and one of the first things you’re confronted by is the traffic. So in a sea of two-wheels, four, diesel smoke and animals it can be hard to stand out. Picking a Royal Enfield doesn’t make the task any easier, they’re everywhere! But Cycle City Customs in the Northern city of Ludhiana were up to the challenge and have gone above and beyond a mere cosmetic makeover in transforming their one-off 2012 Classic 500 into a genuine Hot Rod for the Indian streets. 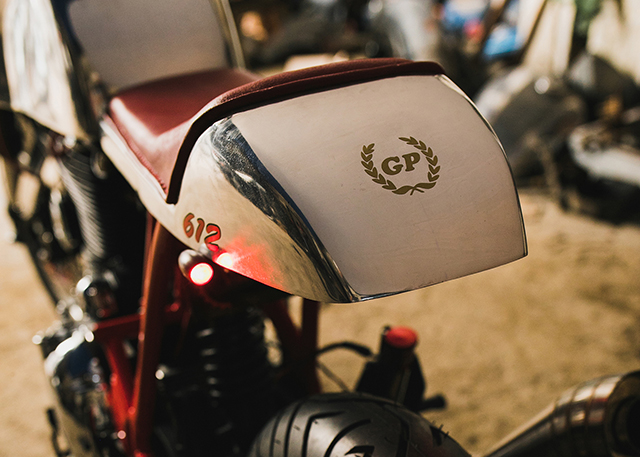 To give you an idea of just how many motorcycles are on the roads in the world’s second-most populous country, 21million new units were sold in the financial year 2018/2019. Add to the mix the millions of second-hand machines and you have more people using two wheels as their transport than anywhere on the planet. But with the Royal Enfield still the bike to have it makes sense for a custom shop to focus on the make, but with few getting truly serious about their power and performance, founders Baljit Singh and Sukhkaran Singh were ready to change the game. 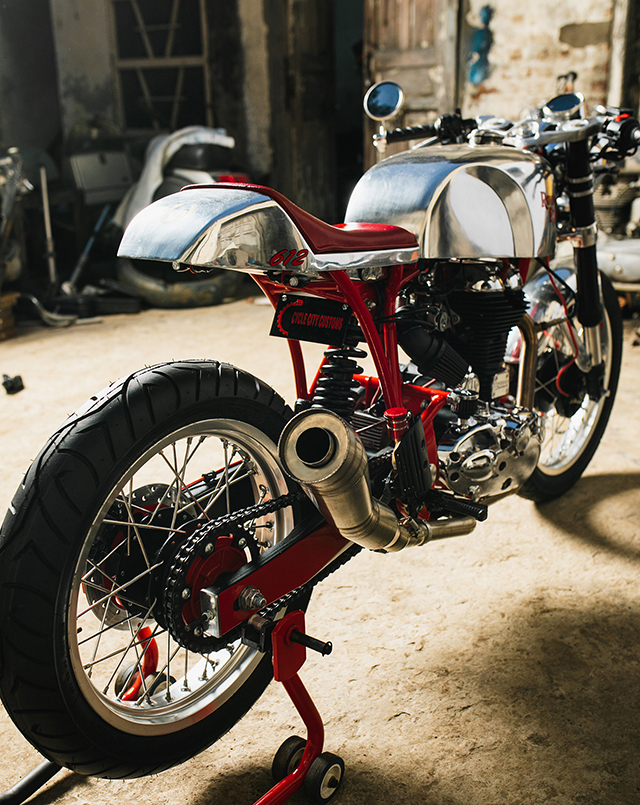 Baljit is the major man on the tools, a second-generation mechanic who started spinning the spanners at 14. While Sukhkaran brings the design eye and both made their intentions known when naming the project from the outset, Vajra, which means Thunderbolt in Sanskrit! While the lads in India were breaking the bike down, over in the UK, Hitchcock Motorcycles were preparing one of their performance packages to send over. This allowed Sukhkaran to focus on the design while Baljit pulled the motor. 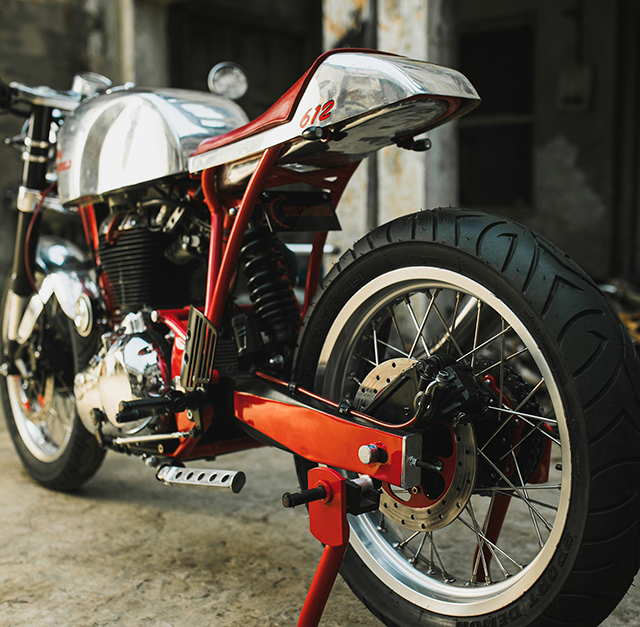 With the parts arriving the 500cc RE single was given the big block treatment, now swinging a custom made stroker crank. Over the top the new barrel houses a high compression Wossner Piston, all assembled with new gaskets and bearings. This brings the capacity of the short block up to 612cc and to make the most of it the head was next on the operating table. Inside the ports have been flowed and allow the high lift lobes and big valve kit to do their thing. 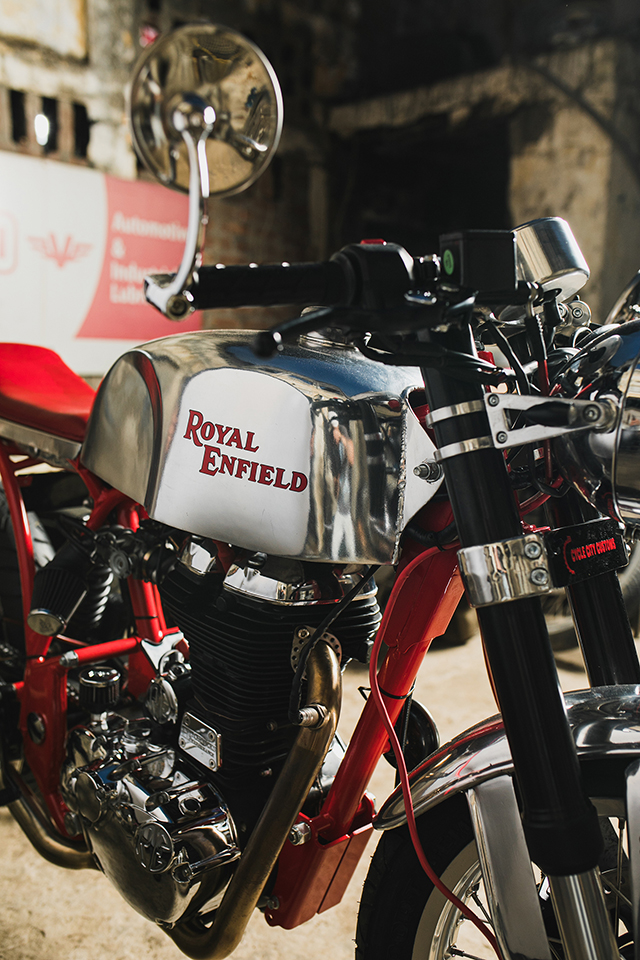 On the outside there is a larger diameter intake and the fuelling is taken care of by a Dynojet PC5 plug-in ECU in conjunction with an Autotune unit, and a quick shifter has been added for clutchless upshifts. On the hot side of the engine a custom stainless exhaust was fabricated with a bung for the 02 sensor and finished out in a GP style muffler. The result is a dyno proven 40bhp at the rear tyre, or a 150% increase over stock with a thumping flat torque curve to match. 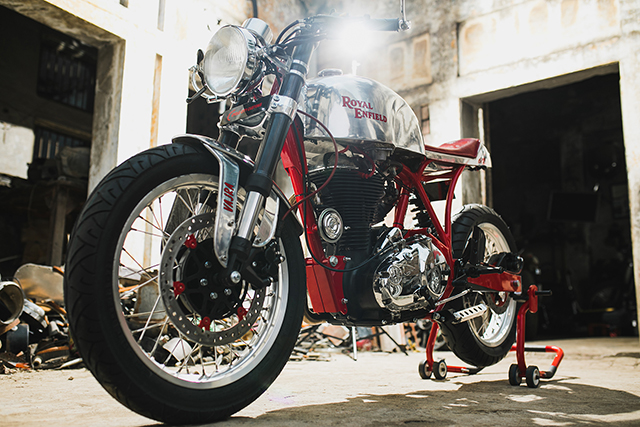 Of course such a boost in power means the stock chassis setup would never allow those extra ponies to run free. So starting at the back end the standard twin shock swingarm was tossed aside and a replacement found in the form of a Yamaha unit from an FZR600. With a mount welded to the frame the single shock is fitted up and the conversion gives an inch and a half increase in wheelbase. Up front, a USD setup from a KTM provides a great conversion with their WP forks, disc brake and integrated clip-ons. 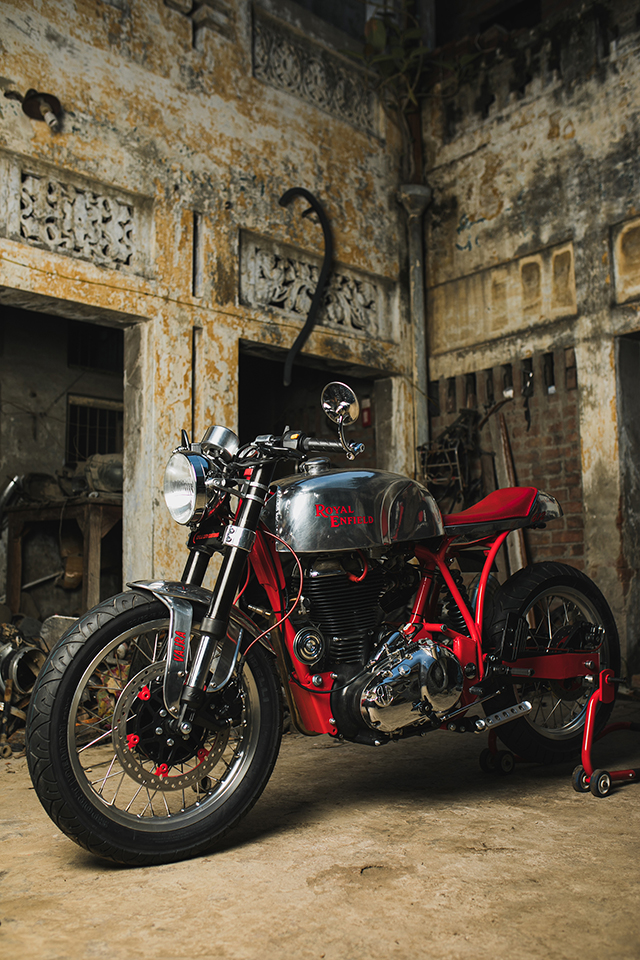 In the quest for more performance weight reduction took on an important role and reducing the unsprung mass is aided by changing the wheels for a full set of aluminium items wrapped up in Pirelli rubber. At the rear the stock drum brake was tossed aside and a disc conversion with stainless lines added. Now the team could turn their attention to the looks of their thunderbolt and the subframe was reshaped to take full advantage of the negative space beneath the seat thanks to the shock conversion. 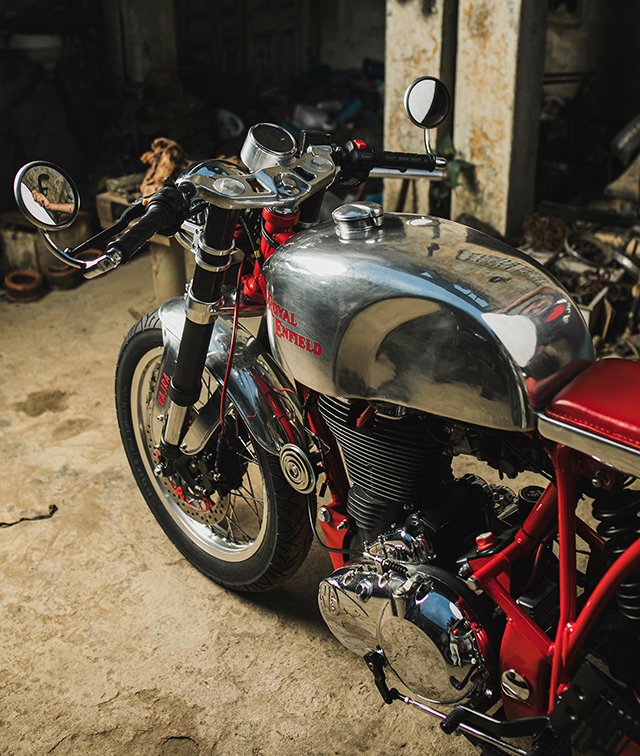 While the frame was getting a coat of red the first of the alloy parts, the old and new mix front fender was fabricated. While on top of the frame the highly polished aluminium fuel tank and cafe racer styled tail section give the bike the look to match its performance. The accessories are kept to a minimum, with the classic headlight offset by custom alloy rearsets and a lightweight side stand. Before the build, the RE tipped the scales at 197kg but rolled back on completed and the final weight is just 154kg fully loaded. Now Cycle City Customs not only standout in the Ludhiana traffic but leave it behind as Varja unleashes its full force. 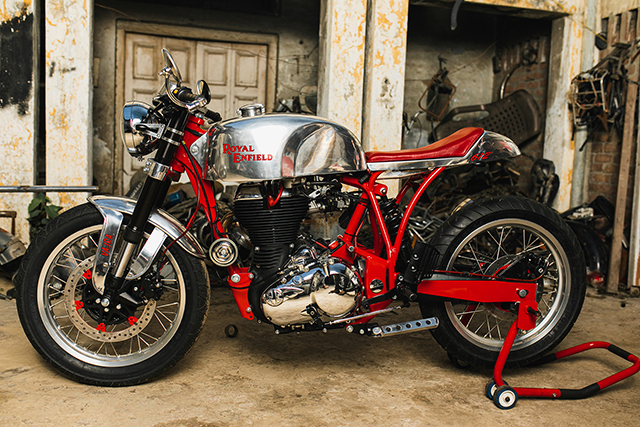