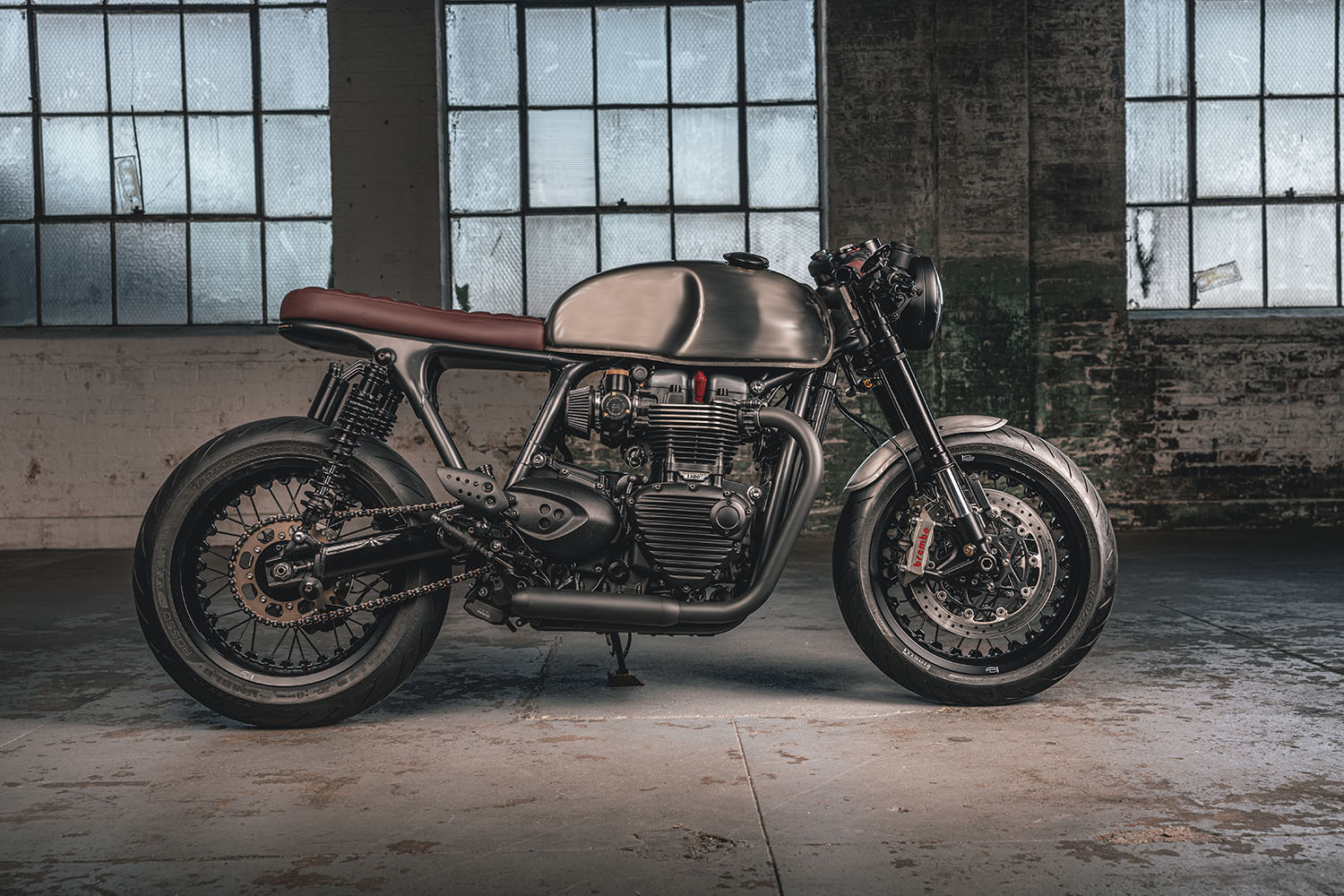 Located just thirty minutes outside of New York City, sits A&J Cycles, a motorcycle shop which prides itself on being a one-stop shop for Triumph enthusiasts across the globe. The shop has evolved in the last decade from selling parts out of a bedroom closet to customizing modern Triumphs using their skills and catalogue of high end components from their online store. The latest build by Brian Ballard and his team at A&J Cycles is this stripped down Thruxton R that has not only shed a lot of weight but also gained performance and some brutish good looks.

Brian crossed paths with the bike’s owner at a local motorcycle gathering shortly after he retrieved the 2017 Thruxton R from another shop. “He felt the original bike was a great place to start but that the components and proportions of it could be greatly improved,” recalls Brian.  “Several conversations later, the build parameters were set. We were to strip the bike of all décor and reduce it to the basic mechanical essentials with the end goal of improving its performance and stance. His vision was a marriage of simplicity and sophistication that would be timeless.” Brian and his team went to work a week later by stripping the bike down to its frame and engine to begin the transformation.

Creating the ‘dream team’ Brian enlisted their resident painter and fabricator, Dave Adamski from Slag Kustom, to assist with the build. “We modified the frame with a new hoop and electronics tray and shaved all tabs and passenger peg brackets. We relocated the battery under the engine with a trick skid plate/tray and integrated a new license plate bracket into the backside of the main cradle.”

They then fabricated a new seat pan and sent to Keith’s Custom Seats for upholstering. To further accent an ageless look, they stripped the paint to display the raw tank, hit it with scotch bright and finished with a clear coat. Up the front, the ender was provided by Meyerbuilt Metalworks. The frame is painted metallic grey and the rest of the bike’s components received a healthy dose of powdercoating from TRG Coating in Stockholm, New Jersey.

To enhance the bike’s overall performance, the air box was ditched in its entirety in favor of pod filters from Sprint Filters. They also replaced the exhaust with a complete system from BAAK (France) and the ecu was programmed with a custom tune to maximize the new components.

The newfound power is put to the ground with a set of Kineo wheels which include a 180 tire conversion on the rear. To ensure proper clearance of the rear tire, they made custom offset sprockets and spacers and utilized a 520 EK 3D chain. The suspension was also upgraded to incorporate the Ohlins blackline TR965 shocks and an Ohlins blackline steering damper.

To accommodate the new Chronoclassic dark tachometer by Motogadget, the guys machined the stock top clamp and made a mounting bracket. The gauge was wired using the Vis-T module from Peak Mod. To improve visibility, they installed an adaptive 2 headlight from Motodemic which was tucked closer to the trees with their low profile headlight bucket and brackets. Then they upgraded the turn signals to LED offerings from Radiantz and Kellermann.

To complete the overall aesthetics of the bike, they added Webco inspired finned engine covers from Motone Customs, levers and rear fluid tanks from Rizoma and m.spy mirrors from Motogadget. All of the hardware was replaced with black or titanium pieces. They also created a more aggressive riding position by installing Sato rearsets and Woodcraft clip-ons.

The end result is a machine that is now 35lbs (16kg) lighter than a stock Thruxton with 10 extra ponies on tap. Not only does the finished bike accelerate and handle much better now, but it also looks so damn good with its clean and edgy styling.